The coronavirus has temporarily changed the way of life in America. Most states have issued stay at home orders and only essential businesses remain open. Americans are practicing social distancing and many people are reportedly getting the quarantine blues. What’s the solution?

Here’s a novel idea… read a book! Yes, that old tried and true way of obtaining information and entertaining oneself is still a wonderful way to pass the time. We’ve compiled a list of some of our staff’s favorite books in science, nature, politics and history.

Or if you’re in the mood for lighter fare, check out the e-books available at Copper Cactus E-books, which includes the Tales of Zarkon science fiction series by Arizonan S. Zarkon. As staff member Lamebeard the Pirate sez, “Arrrghhh! They’re ripping good yarns!” They’re affordably priced, too.

Get Your Irish On!

St. Patricks day is fast approaching. If you need Irish gear, we recommend going to the Cyphernaut store and peruse their selections. They have an Irish harp design and a shamrock design that you can place on t-shirts, mugs, stickers, etc. Pretty cool stuff! Erin go bragh!

Since phony, feckless, Jeff Flake has opted out of politics for the time being, Democrats have an excellent chance to pick up a Senate seat here in usually red Arizona in the 2018 midterms. Democrat Kyrsten Sinema, who has served the 9th Congressional district since 2014, is running for Senator against Republican Martha McSally, who has served the 2nd Congressional district. So at least Arizona will have it’s first female Senator.

But as you’d expect from the modern day GOP, they are slinging mud like it’s a monster truck show. McSally has been relentless in her character assassination attack ads on local tv here, spewing forth volumes of lies and misleading claims on Sinema, forcing the Democratic candidate to play defense. Unfortunately, the ads seem to be working as Sinema’s lead since earlier this year, which was substantial, has slipped in the polls. Sinema has voted many times with Republicans over the past four years because she has to walk a political tightrope since many in her district are Republicans. But like her ads state, Sinema is truly an Independent like the majority of Arizonans are and will represent the state as it is now becoming; a purple state.

But McSally is hardly a ramrod straight as she claims to be and she seems to be adopting a Trumpian manner in attacking Sinema and the Democrats. Sure, she impressively served as a pilot in the military (we truly applaud her record of service). But she had the nerve to attack Sinema for protesting the clusterf*ck that was the Iraq War and the quagmire that still is the Afghanistan war. And she’s claiming Sinema is protecting molesters and rapists, and would leave the border unprotected, which is downright lying and dirty politics, something Republicans claim to abhor. The only thing Sinema disagrees with McSally on border security is the necessity of a wall: McSally wants Trump’s stupid wall and Sinema wisely sees that its a waste of taxpayers money that won’t solve the problem (drones, tunnels, etc…).  McSally also distanced herself from Trump after his election, but is now embracing the orange haired megalomaniac with open arms like other former moderate Trump-haters like Lindsey Graham and Susan Collins in the GOP. There is no doubt that McSally will be a rubber stamp for a man who is proudly ignorant and grossly dishonest as evidence by his recent 60 Minutes interview. If there’s anything we don’t need more of in this country, it’s Trump lackeys.

It should be very interesting here in Arizona on election day. This state may not become blue, but it could become very purple November 6th which is more indicative of what this state is: Independent. 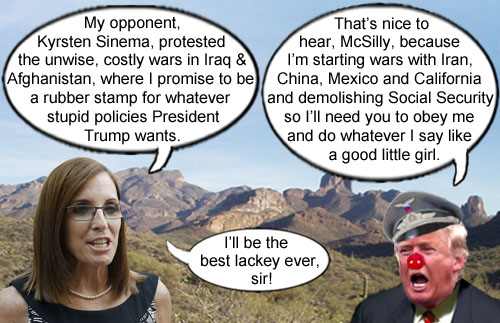 Arizona Republican candidate for Senator, Martha McSally, clarifies that she’ll be nothing more than a rubber stamp for any stupid, disastrous policy that springs forth from America’s CEO/Dictator, Donald Trump’s addled brain.

We’re sick of Trump and his horde of gun loving, conservative Republican malcontents, so we’re doing a palette cleanser today and instead focus on how technology has transformed our society and not always for the best.

We’ve commented before about the ubiquity of cell phones and how we’re completely and totally distracted by all things related to technology. We saw the old Apple Macintosh commercial from 1984 not too long ago and the irony leaped out at us. In the commercial, the downtrodden people are slaves to their masters who appear on screens barking instructions on what to do and how to do it. By choosing the Mac, one can break free from the bonds of uniformity and gains independence.

Cut to the 21st century and people everywhere are walking around like automatons taking orders from first, Apple’s guru Steve Jobs, who passed away in 2011, and now Tim Cook. When Apple issues a new iPhone, people drop what they’re doing and wait in line for days for the new gadget. When Jobs spoke, people sat spellbound in the audience just like in the 1984 commercial. Now, Cook does the same. Oh, the Irony!

We’re not saying all tech is bad. The Internet is clearly a wonderful thing. No longer does one have to trek to a library to do research. One can find the weather forecast instantaneously or watch world events happening in real time.  But the fact is that we don’t control technology anymore; technology controls us.  We are truly slaves to technology. And the people who are in control of our society are taking complete advantage.  At any given time, you can be tracked down and located. One disturbing instance in Orwell’s book 1984 was that people couldn’t even enjoy their own privacy. Big Brother was always watching them and knew where they were at all times. Well, Big Brother is watching us now and it’s not just the government. Tech companies like Facebook, Twitter and Google wield enormous power and influence. Our society is permanently distracted by social media and until we learn to control our addiction, our society will continue to suffer. When the measure of a human being is how many friends one has on Facebook or how many followers you have on Twitter then something is seriously wrong. We need to break free from this conformity and regain our independence or else accept that the dystopian future of 1984 has come to pass. 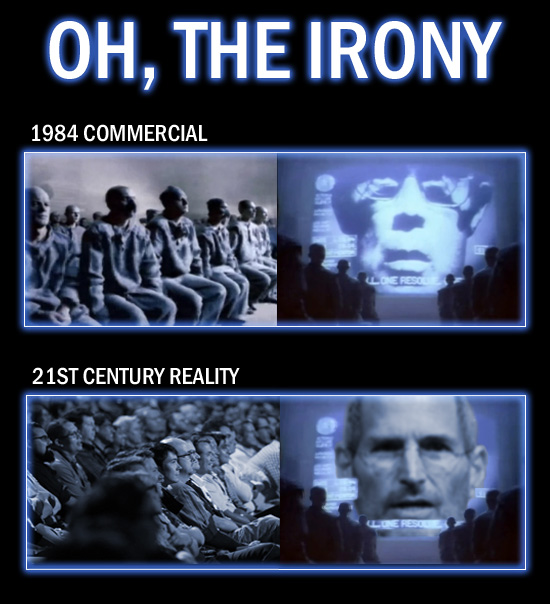 Humanity has managed to make the dystopian future depicted in George Orwell’s book 1984 a reality in the technology addicted 21st century.