While American CEO/Dictator, Donald Trump, assembles his cabinet from hell, we’re taking a little reprieve. Eighteen months of Con-a-thon 2016 has left us exhausted and we need to recharge our batteries a little. We recommend everyone do the same. We’re going to need a lot of energy to deal with the enormous loads of crap that’s going to be coming down the pike in the near future. We’ll be back soon with our humorous take on Trump’s cabinet picks. Happy Thanksgiving to one and all! 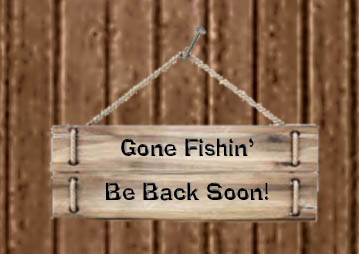 We’re taking a break America. We’ll be back real soon.

We’re still coming to grips with this election but the initial shock is worn off. While it was pretty much a disaster for sanity, science and intelligent people everywhere, there were some minor victories, especially here in Arizona. While grouchy curmudgeon John McCain unfortunately retained his seat, there were some good things happening: Democrats made pickups in the Arizona House and Senate; Democrats maintained their seats in the U.S. House of Representatives; there was an increase in the minimum wage; one of the people responsible for the March primary debacle, Helen Purcell, was voted out of office; and perhaps the biggest news was that Maricopa County Sheriff Joe ‘Just Call Me God’ Arpaio will finally be riding off into the sunset after being defeated by Paul Penzone.

But several interesting and revealing things are happening in the post-election trauma. We’ll address just one in this post and that is the stock market has taken off with Donald Trump taking office. Initially, stocks plunged worldwide and people around the world started to freak out. But the United States stock market stabilized quickly…almost too quickly. That quick recovery and the fact that it’s taken off since then speaks volumes. The sectors soaring are dirty energy companies (coal, oil, gas), pharmaceuticals and banking and financial services.This pretty much confirms what we’ve known all along; America is no longer a democracy, it’s a corporate oligarchy. As long as the President (even if it was Clinton) is friendly to Corporate America and Wall Street has it’s money, then all is fine. The stock market hangs over America’s head like a Damocles sword: Please Wall Street and its investors or else!

This is where the con comes in. Although Trump claimed to be on the side of the little guy, he is a big time supporter of corporatism. He loves money and other people with money…and that doesn’t mean most of us in the middle and lower classes. In any given conflict between corporate America and individuals, Trump will side with corporate America every time. Trump is a plutocrat! Red state Americans have been royally conned! Unfortunately, Trump voters won’t realize they’ve been screwed until after Social Security and Medicare have been taken away (the Republicans have wanted SS repealed since World War II) or they’re paying higher prices for prescription drugs because protective consumer regulations have been stripped (good times coming for the Pharma bros) or they don’t receive assistance after a natural disaster ripped up their property because the austerity crazed Republican government doesn’t want to spend money to bail them out (remember Hurricane Katrina). But then they’ll probably blame it on the Democrats, who instituted these safety net programs and protective regulations in the first place, because Fox News, a.k.a. the Republican Propaganda Network and our new CEO/Dictator Trump tell them it is so.

Fasten your seatbelts America…it’s going to be a bumpy and nauseating ride. 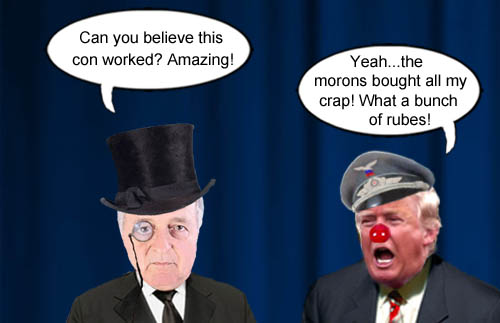 New American CEO/Dictator Donald Trump celebrates his massive job of con artistry on the American people with one of his fellow plutocrats.

We’re shocked and in mourning for a sane, intelligent America. Words escape us at the moment so we’re reprinting an article from when America chose a similar path of insanity back in 2004 and re-elected George W. Bush. Yeah…that turned out well didn’t it. One thing’s for sure; conservative Republicans never learn.

This article is from our November 7, 2004 post-election issue.

America Speaks: “51% Of Us Are Fucking Idiots!”

America went to the polls last week and re-elected George W. Bush as president even though he’s started a costly war on false premises with no exit strategy, plunged the nation into tumultuous debt, rolled back numerous environmental regulations in favor of industry, presided over an economy that has lost almost a million jobs, underfunded the ‘No Children Left Behind’ program, misled the nation about the cost of his healthcare bill which does nothing to alleviate high costs and performed anemically in all three televised debates.

Bush supporters spoke out and explained why they voted for him. Dale Gilman of Empty Noggin, Georgia, said, “I voted for him because he’s the one I’d rather drink a beer with. That’s my only criteria for president. I’ll have to invite him over to my trailer for a beer one of these days. It’s not quite the country club he’s used to, but I think my gun collection adds a certain redneck ambiance.”

Kirby Tucker, of Cracked Nut, North Carolina, said, “All I knows is I don’t want no wolves to catch me and eats me.”

Durwood Dunndoody, of Oozing Bed Sore, Texas said, “The big issue of this campaign was gay marriage. No doubt about it. Thank God, the President is going to make a stand agin’ those hell bound fruitcakes. They’re worst than the terrorists you know.”

Dwight Stevenson, of Ostrich Neck, Oklahoma, said, “I know the president has made some mistakes, but he’s a known quantity. I’m comfortable with his ineptitude.”

Rev. Fred Campbell, pastor of the Fifth Evangelical Church of the Backwoods in Dunceville, Tennessee, said, “Praise be to God! The rapture is so close I can smell it!”

Dave and Karen Lydell, of Dullardton, Iowa, said, “We believe in secretive Orwellian government. We completely trust President Bush to do what’s right, because it’s really none of our business to know or question what they’re doing. We don’t mind if our government monitors our every movement. It’s a small price to pay for freedom.”

Donna Beacham, of Salem, Oregon, said while booking a flight to Vancouver, Canada, “The choice was so obvious. It’s like we’re speeding for the edge of a cliff in a gas guzzling hummer, and the passengers vote to drive off. Un-fucking-believable!”

College student, Craig Kaster, of Santa Bonita, California, said, “I’m so voting for that Kerry dude. What? The elections were last week. Oh man! I like so spaced that off.”

Al-Qaeda leader Osama Bin Laden, said. “This is great! Al-Qaeda will get stronger, America will go bankrupt and I’ll get to live four more years. That chimp Bush is playing right into my hands. Allah Akbar!”

Much Ado About Nothing

As most sane people figured, the FBI’s reopening of the investigation of Hillary Clinton’s emails produced no new results. But at least both Republicans and Democrats seem to agree on one thing: FBI director James Comey will probably be out of a job real soon. 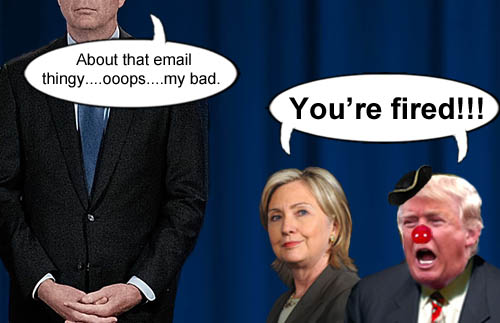 On the eve of the election, Republicans and Democrats have finally found something upon which they can agree.

Donald Trump has been claiming the whole summer with his pals from Fox News, a.k.a. the Republican Propaganda Network, that the election will be rigged. Republicans have claimed that voter fraud is rampant despite statistics showing that it is virtually non-existent. This is of course to obfuscate the voter suppression that is occurring at state level by the Republicans. This should be no surprise because ever since the Reagan years, Republicans have been claiming to be something they’re not. They claim to want government out of your lives, but approve of government controlling a woman’s uterus and warrantless wiretapping. They claim to want small government but government has grown incredibly under Republican regimes. They claim to be ‘compassionate’ conservatives, and yet they don’t want healthcare for everyone and want to eliminate Medicare and Social Security. The list goes on and on. So basically when a Republican claims that Democrats are rigging the election, you can pretty well bet that the Republicans are working on rigging the election.

So what happened this past week: a Trump supporter was arrested in Iowa for voting twice. Yes, Donald Trump predicted voter fraud and his supporters are making damn sure his prediction comes true. 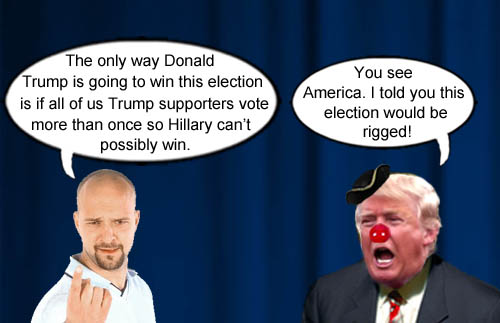 A Trump supporter proudly boasts that his idol’s predictions of a rigged election will come true.

First of all, this may be all to do about nothing. In clarifying his purpose, Comey stated that he said they may be a connection with Anthony Weiner’s email to Clinton, not that there was. And since there are over 600,000 emails to process, a solid answer won’t be known until after the election.  The DOJ has already filed a complaint against Comey and several former Attorney Generals, including former Bush lackey, Alberto Gonzales,  have stepped forward and accused Comey of wrongdoing. Well, how convenient Mr. James Comey! You don’t know for sure, but you thought you’d give into the Republican pressure and throw some kerosene on the fire.

Second of all, information has leaked about a possible computer connection between Donald Trump and Russia. Much has been made about the bromance between Trump and Russian leader, Vladimir Putin. Trump and many top Republicans have even stated that Putin is a stronger leader than Obama, completely ignoring the fact that Putin is an authoritarian dictator, which speaks volumes about the mindset of the current Teabagger Republicans.

Which brings us back to James Comey. Comey has said that he doesn’t believe there’s a connection between Trump and Russia and didn’t want to pursue the matter before the election. But yet, he was perfectly fine with bringing up the remote possibility of finding a connection between Weiner and Hillary Clinton before the election. We think your partisanship is showing Mr. Comey. We also think maybe unemployment may be an option in your immediate future.

And for all those Republicans who think Vladimir Putin is so great…MOVE TO RUSSIA!!! 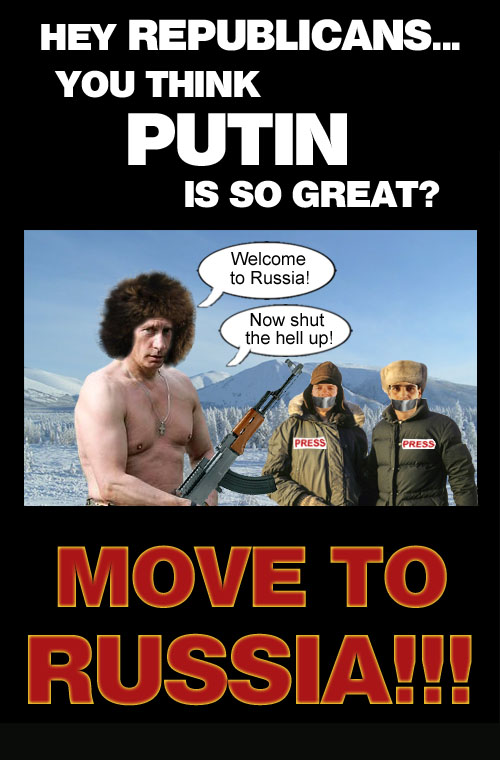