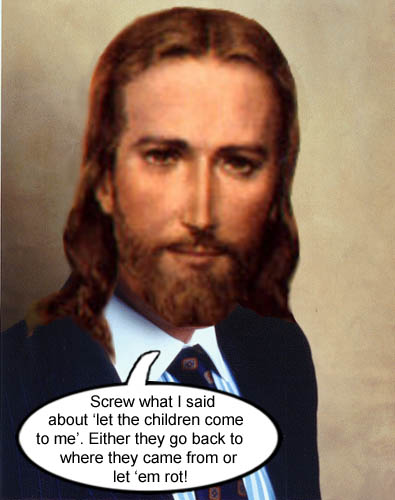 It’s shocking to us here at the Bucket how horrible people’s memories are. A recent poll of 1400 people revealed that more people think President Obama is a worse President than George W. Bush. Were these people unconscious during Bush’s eight years in office? The Bush administration routinely practiced crony capitalism with favored corporations and the Bush tax cuts to the 1% made most Americans poorer and brought America to the brink of disaster. Not to mention the trillions of dollars spent on clusterf*ck quagmire wars of Afghanistan and Iraq. There were also 13 attacks on U.S. embassies causing 98 deaths during the Bush years in addition to the 9/11 attacks which caused 3,000 deaths. Then he used the 9/11 attacks for political purposes over the next three years to keep the sheeple scared.  Oh and then there was the stacking of the Supreme Court with conservative ideologists and activists who have not only opened the door wide for unrestrained corporatism but have given corporations control over females reproductive rights and apparently freedom to push their religion down employees throat. And of course the Bushies denied any wrongdoing while only giving access to Fox News, a.k.a the Republican Propaganda Network. Alternet has a list of some of Bush’s more spectacular failures.  Fortunately, most historians’ memories haven’t faded and they continue to rank Bush as one of the worst presidents. Here’s a photo-toon from our February 18, 2007 issue which shows the Bush Administration replacing the presidential seal with a more appropriate logo reflective of their ‘moral’ values.

Boy the Supreme Court is certainly showing its true colors the last couple of years. First they showed what supreme corporate lackeys they were by giving corporations ‘personhood’ and then they said these ‘corporate people’ could give as much money as they wanted politically to senators and representatives who will do their bidding. Now apparently, corporations also have religious rights, too. In a landmark case this week, the Supreme Jesters said in the case of Burwell v. Hobby Lobby, that corporations could opt out of paying for an employees birth control because it went against their religious beliefs. Wow! Who knew that corporations could have religious beliefs. Now corporations can make healthcare decisions for their employees. Talk about your death panels, eh Sarah Palin! This decision also provides a loophole for those who oppose Obamacare. Just state that a particular medical procedure goes against your religion and whoop there it is. What’s next? A company or business refusing service to a customer based on religious belief? It almost happened here in Arizona folks. The christians are going to shove their religion down your throat whether you like it or not. (Interestingly enough, Hobby Lobby will pay for vasectomies and Viagra.)

So are you outraged that now corporations are not only citizens with religious beliefs but also more important than women. You can fight back. You hit corporate America where it hurts most; in the pocket book. That’s why we say BOYCOTT HOBBY LOBBY!! There are tons of arts and crafts stores out there. America is all about choice (except when it comes to women’s reproductive rights). Choose to cause Hobby Lobby’s failure. We know that you are mostly consumer automatons and that it’s in your wiring to buy, buy, buy. Be strong! Resist that burning temptation to buy lace doilies or glitter or craft foam or iron-on appliques. Buy them at a locally owned shop! Again we say,  BOYCOTT HOBBY LOBBY!! 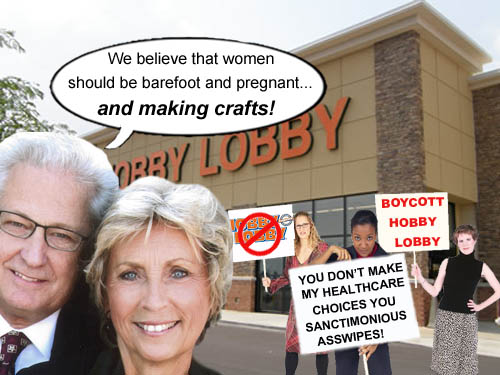