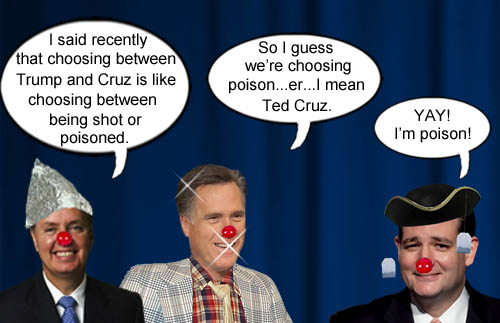 We used to think it was funny that Donald Trump was the frontrunner when this charade called Con-a-thon 2016 started last summer. We figured that all his gaffes, miscues and hateful comments would surely lead to his demise before the first primaries and one of the more seasoned ‘establishment’ GOP candidates, like Bush, Walker or Rubio, would take the lead. But Trump is clearly on track to becoming the Republican nominee and it’s becoming more scary than humorous. As a matter of fact the Economic Intelligence Unit(EIU) ranked the prospect of a Trump presidency as one of the biggest threats to global economic stability, right up there with radical jihadists.

The most perplexing thing: the supporters of Donald Trump. These are people who should be supporting the man who would really help them, socialist Bernie Sanders. But as we’ve commented here before, many lower and middle class Americans view themselves as ‘temporarily embarrassed millionaires’ , not the exploited backbone of the nation that they truly are. Americans are overworked and underpaid but yet somehow, some of them think that Donald Trump, who is a master at manipulating people and the media, will make their lives better because of the trickle down myth which the Republicans have successfully trumpeted ever since the days of St. Ronald Reagan; Donald Trump is rich, so his riches will trickle down and he’ll make us all rich. It didn’t work in the eighties under Reagan, the aughts under Dubya and it won’t work in the future under Trump.

We’ve been hoping that the people who support Trump would have woken up by now, but that doesn’t seem to be the case. In fact, with the outbreak of violence at anybody who speaks against Trump, they seem more adamant than ever to place America into the hands of an authoritarian megalomaniac with a lust for power and a hatred for dissent. The true future for Trump supporters will more likely be as low wage slaves at his resorts and casinos. 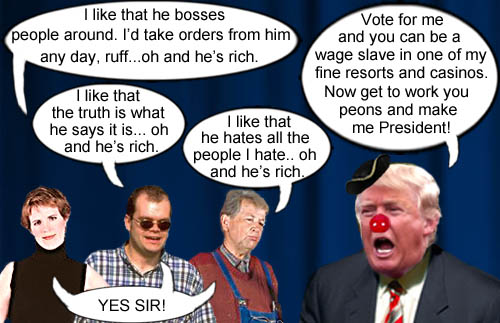 Supporters for Donald Trump express their obsequious desire to be future wage slaves for the authoritarian megalomaniac.

Well folks, the sham that is Con-a-thon 2016 drags on and it looks like the Republicans are choosing fascism over democracy, as Donald Trump racks up the delegates and the violent thugs. The con that is being pulled on the public not only by the Republican party but the complicit corporate media is mind boggling. The media is reporting that the Republicans are pulling out all the stops trying to stop the orange monster. Even 2012 GOP nominee, Mtt ‘Spiff’ Romney spoke out against the Donald, calling him a fraud. Yes, the Republicans are so concerned that Trump will be the nominee and in typical Republican fashion are blaming President Obama for the rise of Trump. That’s right; in the narrow conservative Republican’s viewpoint, it’s never the fault of a Republican.

But the thing is that while the ‘establishment’ and the remaining GOP candidates are attacking Trump, they’re also saying that they’ll support him if he becomes the GOP nominee. So the attacks on Trump being performed by Rubio, Kasich and Cruz are nothing but absolute, meaningless bullshit. Because no matter what they say, these feckless frauds are going to support this authoritarian megalomaniac for President anyway; just like everyone in the GOP ‘establishment’. Like P.T. Barnum said, “There’s a sucker born every minute.” 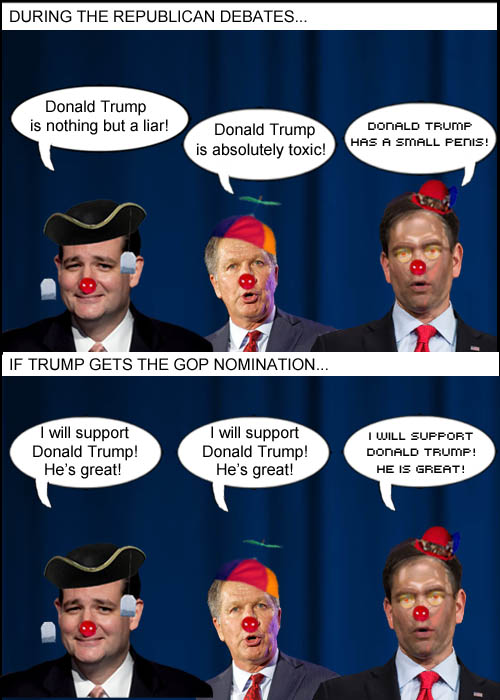 Discerning GOP candidates Ted Cruz, John Kasich and Marco Rubio, a.k.a. Marcobot 2016, boldly criticize frontrunner Donald Trump as an orange monster but will courageously support him if he gets the Republican nomination.

What happens when parents can’t control their delightful little urchins in a public restaurant and the wee ones run amok? Fun times, that’s what!

Most of the patrons at the Bucky’s Burgers at Cactus Corners’ Blue Cactus Shopping Center were absolutely delighted by the antics of Layla Cooper’s six rowdy and rambunctious children last Monday evening. Cooper and her urchins invaded the fast food chain at around 6:00pm and stayed for a full hour charming the customers.

Cashier Danica Drew said, “When Layla came in with her children, the place just livened up immediately. Those kids were running around the dining room, yelling, pushing and punching each other, pulling each other’s hair. They weren’t shy either. They’d run right up to people and scream at ‘em. It was so fun watching those little scamps. Then once their food was ordered, they had a good old fashioned food fight right there in the dining room. They threw everything; fries, hamburgers, drinks. We’re still trying to get those shake and root beer stains out of the carpet. But hey, kids will be kids. What are you going to do right?”

“I’m telling you,” commented senior citizen Gert Metzger. “Those little whippersnappers were delightful. Take that little brown haired boy with the runny nose. I was eating my burger when he comes up and yells in my ear. My hearing aid started whining and I dropped my burger on the floor. Then the little dickens used my shirt sleeve as his Kleenex and wiped his nose all over it. That ragamuffin sure got me good. But hey, kids will be kids. What are you going to do, right?”

Mechanic Al Stanley said, “Well I was sitting on the toilet, reading the latest issue of Cosmo, when all of a sudden I hear all these footsteps. It sounded like a herd of buffalo. Then one of those delightful little sprites kicked open the door and much to my delight all six kids were standing there watching me take a dump and laughing. Then they left the stall door open and went screaming out of the rest room leaving the rest room door wide open to boot. I can’t remember when I’ve had so much fun. But hey, kids will be kids. What are you going to do, right?… I’ll tell you what I’m going to do…those goddamned little %$^%&#@*((*&&*!*(**@&$.”

Cooper said that she has tried to discipline her kids, but she claims it doesn’t work. “I’ve tried to make ‘em mind, but they just got minds of their own,” said Cooper as she took a drag off her cigarette. “And each of the kid’s fathers ain’t around anymore. Why my last boyfriend ain’t even seen little Chance. That’s him over there, tipping over the trash can. He’s strong for a two year old ain’t he? My current boyfriend and I are trying to have another kid. He’s got a good job, too. He’s a stock boy over at Juggermart. He’s really good to the kids, too, although I’ve seen him letting A.J. have some of his beer. A.J.’s only nine, you know. Angela! Put mama’s cigarettes down honey pie. You’re not supposed to smoke until high school. Besides, everybody just loves my kids. They’re not bad. They’re just spirited and energetic. Yeah, that’s it; spirited and energetic.” She paused and took the cigarette lighter away from Angela. “Besides, we like it here at Bucky’s. We’ll probably come back here next Monday.”

GOP: It’s All About The Size Of The Hand…And The Penis

The GOP hit a new all-time low last week; and that’s saying something because they’ve been nothing but abysmal ever since the travesty that is Con-a-thon 2016 started last summer (Geez has it been that long already!). Yes, middle school students running for student body president are officially more mature than the grown-up Republicans running for President. It started when Marco Rubio, a.k.a. Marcobot 2016, intimated that frontrunner, megalomaniac Donald Trump, might be less of a man because he had small hands. Well Trump, being a manly man, wasn’t going to let that comment slide and suggested in the next Republican debate that he was all that and more. Really???!!!! The Republicans are comparing dick sizes????!!!! IN A  PRESIDENTIAL DEBATE????!!!!! No folks, this isn’t an episode of the Jerry Springer show or a bunch of drunks in a local tavern. These are supposedly legitimate adults who want to run this country, the most powerful in the world,…and they’re talking about the size of their penises. 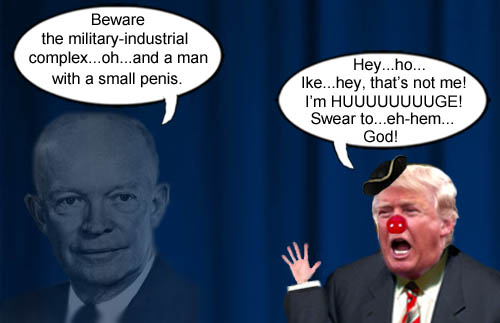 The ghost of the last great Republican president, Dwight D. Eisenhower, warns Americans of the two greatest dangers to their liberty: an unchecked military-industrial complex and a man with a small penis. 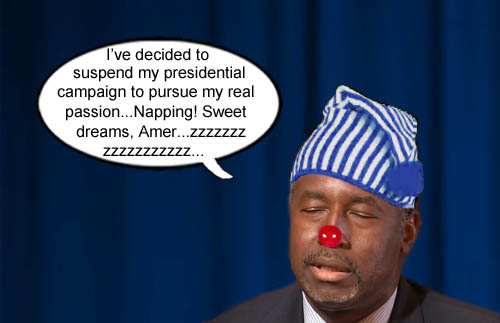 Super Tuesday has come and gone and the Trump Express keeps rolling on, much to the chagrin of every sane, responsible American. Trump won seven states in Tuesday’s primaries and is positioned strongly to get the Republican nomination in the colossal clusterf*ck that is Con-a-thon 2016.

Endorsements keep coming in as well for the Donald. Among the endorsements this past week, was one from former Louisiana Representative David Duke, who also used to be a Grand Wizard of the Ku Klux Klan. In an interview on CNN, Trump passed up a chance to disavow Duke, saying that he didn’t know Duke. The thing is that Trump does know who is Duke is and he manipulated the media in typical Trump (and conservative) fashion – deny, blame others and blow his own horn.

In the joke that was Con-a-thon 2012, we posted an article about a possible brokered convention where a ‘white knight’ candidate would come rushing in to save the GOP.  Well, that ‘white knight’ is here in Con-a-thon 2016 for the Republicans and the KKK alike and his name is Donald Trump. Don’t let the media reports fool you; if Trump keeps winning and shows that he’s “the people’s choice”, then you better believe that the so-called ‘establishment’ will endorse him. Power is power and the moneyed elite will love having one of their own at the controls in Washington. Face it; Donald Trump is the face of the modern Republican party. Welcome to Hell, America! 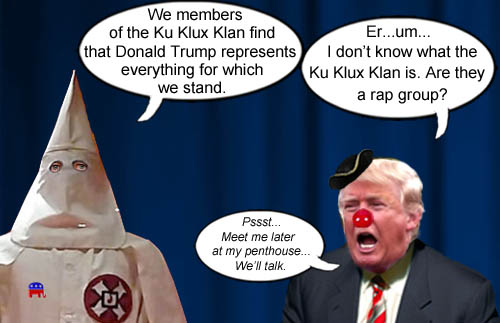 GOP frontrunner and Master of the Con, Donald Trump, deftly deflects knowledge of the Ku Klux Klan while simultaneously keeping open lines of communication with the white supremacist group.