Well guess who’s been speaking up now that Russia has invaded Crimea in the Ukraine? Why it’s a couple of our old buddies from the Bush administration, Dick Cheney and Condoleezza Rice. Dick Cheney, says that we should not take this invasion of a sovereign nation lightly and that no country should be allowed to do that to another country. And Condoleezza Rice echoes those sentiments. Haven’t they done enough for the world already? Of course, as we all learned from those eight fantabulicious years of Dubya and his pals, conservative Republicans are somewhat irony impaired. But hey… Dick Cheney just realizes that war is good business. So if there is the possibility of stoking another cold war and making money off of weaponry or oil, by golly, Dick’s going to be there on the front line ready for the profit taking (see Iraq War). What a Dick! 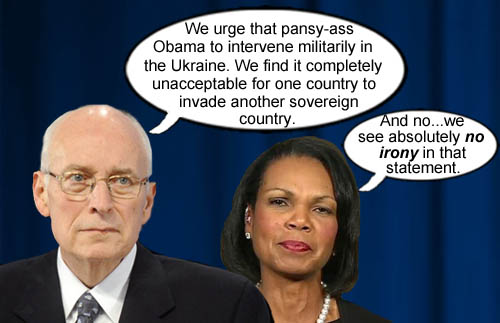 Former members of the Bush Administration and architects of the fiasco called the Iraq War, Dick Cheney and Condoleezza Rice proudly display their irony impairment for all the world to admire.