RNC 2004: The Neocon Future for America

Here’s the final installment of our RNC 2004 retrospective…

The future plan for America for the Neocons is the same in 2012 as it was in 2004: there will be tax cuts for the 1%ers and corporate welfare especially for oil, gas, energy, insurance, finance and defense corporations which will make the rich richer and demolish the middle class thus creating a super lower class to work for pittances in corporations or the military. And thanks to imperialistic foreign policy, perpetual wars will become the norm.  If Romney is elected, you can bet that war with Iran, Syria or some other perceived belligerent will be a certainty. And we’ll stay indefinitely in Afghanistan, the place where empires go to die. Romney will actually make the Dubya years look good. Yes, the future looks pretty bright for neoconservative America. 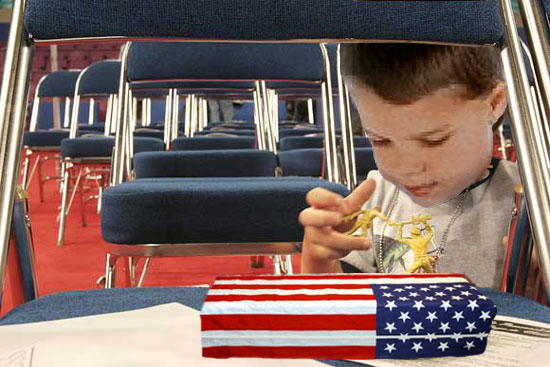 Little Tommy Kimball prepares for his future in neoconservative America.

In America, the Republican Party has become the party of God and Jesus. Well, we shouldn’t be surprised because Jesus was all about supporting the rich while despising the poor. We’re sure if Jesus came back today he’d be wearing a well tailored Armani suit, driving a BMW and/or a pickup, be a member of an exclusive country club, eating caviar, drinking the finest wines and carrying a loaded gun in case any poor person would think of threatening him. And as for healthcare, he’d say, “If you can’t afford it, well that’s your fault for being poor. Why should I help you?” That’s life in a christian nation. We’re also sure that it was Jesus who steered Tropical Storm Issac away from a direct hit on Tampa and instead directed it toward other red states like Alabama, Louisiana, and Mississippi, which have many poor people,  because, you know…he loves Republicans so much. 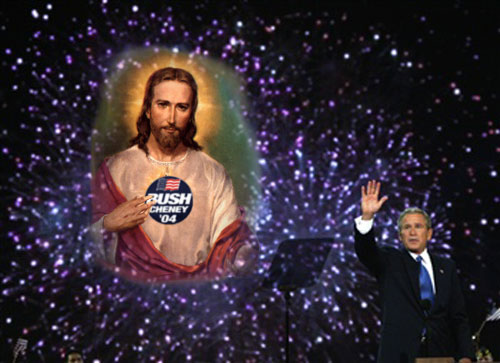 President Bush pulls some strings with the Big Guy and gets Jesus to appear to endorse his candidacy.

Remember when ol’ Dubya yanked our chain by always saying “We’re turning the corner on…<fill in the blank>”. Whether it was the deficit, the war in Iraq, economic recovery, cleaning up after Hurricane Katrina, coming out of the housing market collapse, etc… We were always turning the corner. America turned the corner so many times we kept going in circles in a downward spiral for the next four years. 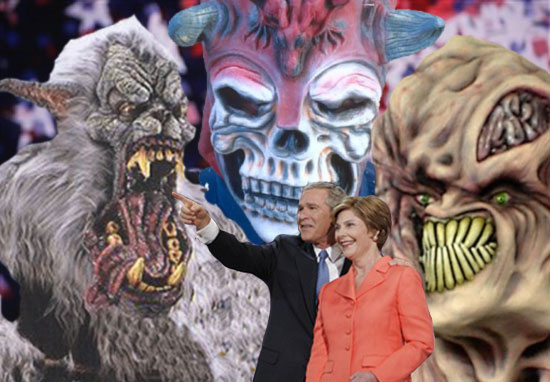 President Bush and his wife Laura point toward the corner America is turning. Appearing on stage with Bush are his old friends, the Deficit, the Iraq Occupation, and Environmental Destruction.

We can honestly say the Bush twins were the highlight of the convention. That speaks volumes. 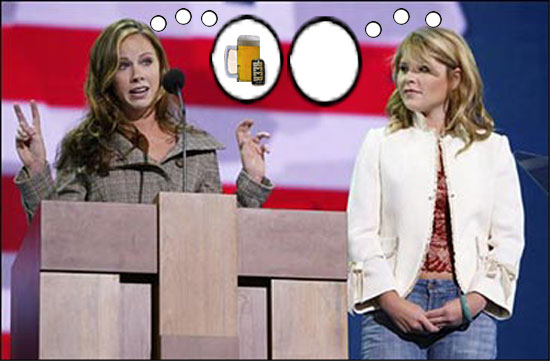 The Bush twins, Barbara and Jenna, demonstrate that they are truly their father's daughters.

Only one thing to say here…What a Dick! 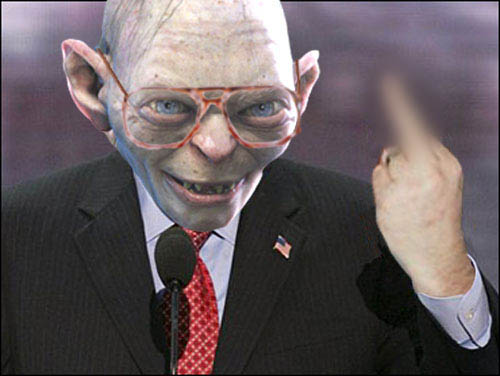 Vice President Dick Cheney emerged from his underground lair with a special message for John Kerry.

Remember when then Democrat, Zell Miller, made headlines by attending the Republican Convention and then exciting the crowd by saying if John Kerry had his way, he’d outfit the army with spitwads.  Fun times!  And then remember his meltdown when Chris Matthews called him on it. Hilarious! What’s even funnier is that the Republican sheeple actually believed Miller and voted to put Dubya back into office for four more  years of mind-numbing incompetence. And what has Zell Miller been doing since he’s left office. Well, he supported Newt Gingrich’s candidacy in Con-a-thon 2012 and is a contributor on the Republican Propaganda Network a.k.a Fox News. Nuff’ said. 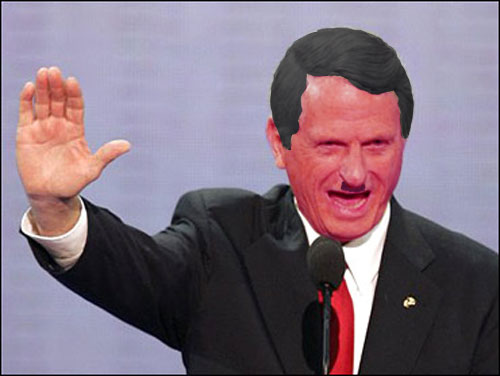 Senator Zell Miller enthralls the crowd with his impersonation of a raving lunatic.

In 2004, the Governator, Arnold Schwarzenegger, was the darling of the Republican party. He had just become the Republican governor of the very blue state of California. There were even some GOP henchmen, who were working to change the Constitution so that foreign born people like Arnold could become President. But alas, the Governator veered to the left during his terms in office, actually working with Democrats and supporting environmental legislation. This, of course, meant he fell out of favor with the corporate loving, environmental hating right wing. Now he’s out of office, divorced from Maria Shriver, and back to performing in bad action movie revivals (The Expendables franchise). But don’t worry folks…wait for it… he’ll be back! (Come on…you didn’t think we could resist putting in a lame catch phrase reference, do you?) 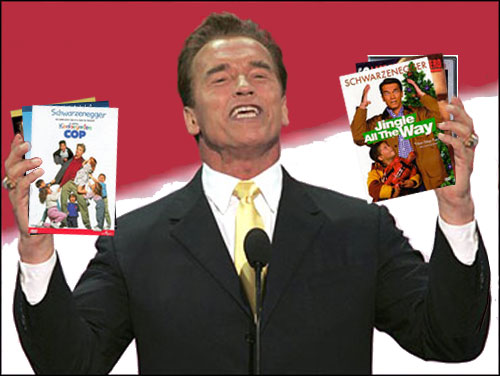 Always the pitchman, Governor Arnold Schwarzenegger hawks some of his lamer movies to the pliant crowd.

RNC 2004: The Flock Follows Their Shepherds

Here are some Texas Republican sheeple hanging out at the 2004 convention exchanging ideas on how they can be more obedient to Dubya, their christian shepherds and the corporate establishment. 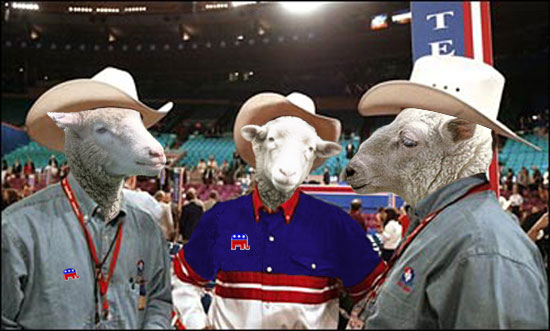 Bush supporters from Texas mull around waiting for orders on what to think and do.

We’ve just had two weeks of the Olympics. Can we stand anymore excitement? In less than two weeks time, we’ll all be blessed with the thrill of the 2012 edition of the Republican National Convention starring Spiff Romney and that Ayn Rand lovin’ fool, Paul Ryan. To prepare for this earth shattering event, we plan to do a little retrospective. We will present some unforgettable photo-toon highlights from the 2004 Republican National Convention. Who could forget when Arnold Schwarzenegger, Zell Miller and even Jesus showed up to cheer for the GOP.

Let’s start out with that ol’ maverick, Senator John McCain. At least he used to be a ‘maverick’ back in the ’80s. Actually, he was ‘maverick’ only to other Republicans, because he actually would…you probably won’t believe this… compromise  and converse with Democrats. It’s astonishing to believe but back before the 90’s, Republicans were somewhat civilized.

And of course, the ‘maverick’ is responsible for giving the world Sarah Palin. That should have been a clue that maybe he was losing it. Seriously, does anybody listen to what Senator McCain has to say anymore?  He said a few days ago, that Obama should replace Biden with Hillary Clinton. Really? That’s the best barb McCain can come up with to get under the Democrat’s skin? He should just retire to one of his eight houses and count all his money.  Here’s his big moment during the 2004 RNC when he cemented his 2008 presidential candidacy. 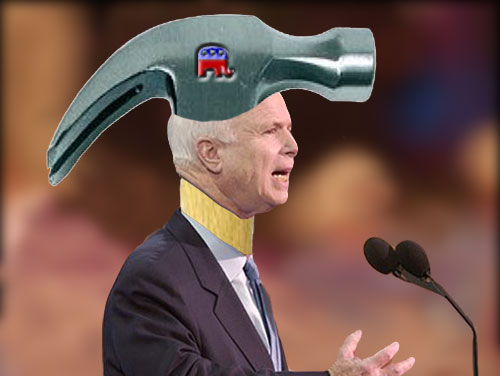 Senator John McCain sheds his 'maverick' label and tags himself with the new moniker of 'partisan tool'.