Super Fan Has The ‘Powah’

The Super Bowl is coming up this week, right here in Arizona. Just like there are people who think they can control events in other parts of the world with the ‘powah of prayer’, there are certain Super Fans who think they can actually influence events on a football field. We thought only Zeus, Odin, God or the Flying Spaghetti Monster could affect sporting contests. You live and learn. Here’s an article from our September 25, 2003 issue about a Super Fan with the ‘powah’.

“I was sitting there listening to the game like I do every Sunday,” said the sixty year old Poston. “It was the first quarter and I was thinking, ‘Jeff Blake should throw that ball to Boldin’ and sure enough on the very next play he threw a strike to Boldin and he got down to the one. Next thing you know, it’s touchdown Cardinals!”

“Then in the fourth quarter, when Favre was driving down the field, I was thinking, ‘The Cardinals really need to stop him.’ And sure enough, Dexter Jackson intercepted the ball and the Cardinals won!”

Cardinals coach Dave McGinnis was very appreciative of Poston’s contributions. “Without a doubt Beverly made a difference. Like on our touchdown in the fourth quarter, we were on the one yard line and I was thinking about giving the ball to Emmitt Smith, but then I could hear Bev’s voice in my head saying, ‘throw the ball, throw the ball’. Blake threw the ball to Hodgins and we go up.”

Dexter Jackson concurred. “Beverly is amazing. I could just hear her voice in my head saying we could win if we just stop them. The next play I iced the win with my interception. But it was Bev who deserves all the credit.”

Poston has also affected many other events from her home like the Vietnam War, the 2000 presidential election, and Ben and JLo’s breakup.

By most accounts, President Obama’s State of the Union address was well received, with most people talking about his slam against the Republicans. Predictably, all five of the Republican responses were pretty lame, as Jon Stewart so deftly analyzed. But what struck us was up and comer, Iowa Senator Joni Ernst’s response. She started doing the old, tired ‘when I was young we walked twelve miles to school with bread bags on our feet in the middle of a blinding blizzard and we liked it’ spiel (seriously folks, everybody’s father and grandfather has already performed this routine ad infinitum). We thought it was pretty funny when it came out this week, that this teabagger darling, who is so against the government, actually received almost half a million in government assistance for her farming family. Well, it seems Senator Ernst loves pork, doesn’t she. Hmmm, sounds like someone’s a bit of a hypocrite, which is par for the course for today’s conservative Republican; do as I say, not as I do. 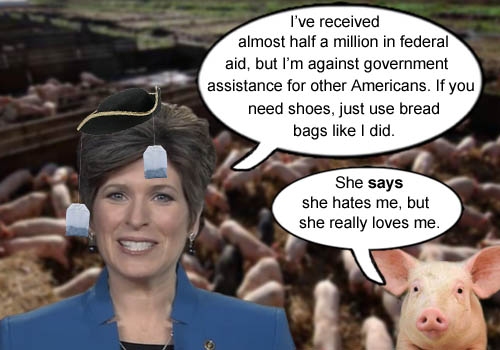 Teabagger darling, Joni Ernst, preaches the wonders of wearing bread bags to the masses while her kinfolk have received the wonders of government pork.

The Senate just voted 98-1 that global warming is happening, as if nature needed human consensus that it was real. Of course, the anti-science Republicans aren’t admitting that humans are causing it. Here’s an article from our August 29, 2004 issue, where good ol’ Dubya explains why scientists are ‘evil’ and shouldn’t be trusted, but the saintly oil, mining, timber and energy companies deserve our complete trust.

The Bush Administration deflected recent criticism from numerous preeminent scientists that the White House is distorting and manipulating scientific findings and giving handouts to industries, which have given massive monetary support to the President, like oil, mining, timber and energy companies.

Dr. Jared Reed, environmental biologist and member of the non-profit group, Union Of Concerned Scientists, said, “This administration is far worse than even the Reagan administration. They have rolled back over 300 regulations since Bush has taken over the Presidency. He has loaded the EPA with lobbyists from the mining, logging, and energy industries as payback for their support during the election. He is systematically blacklisting legitimate scientists in favor of consultants who manipulate and massage data to fit his radical ideological agenda. This blatant disregard for the environment and for the health of the general public needs to be stopped before it is too late.”

Bush defended his environmental policies. “People, I mean we all know that this so called ‘global warming’ is caused by cows farting and volcanoes. And this mumbo jumbo that our rivers and streams are polluted; didn’t you see John Stossel jump in the Hudson River. If it’s so polluted, how come he’s still alive? Stem cell research is evil, too. Scientists want to grow babies and then kill ’em folks. That’s just plain evil. Besides, I think I know a little bit more about the world than these smartsy fartsy liberal ‘scientists’. I mean I am the president and I talk to God on a daily basis. We don’t need any more ‘scientific’ studies. If I were doing something wrong here, don’t you think God would say something.”

Vice President Dick Cheney backed Bush’s views. “Our public land is vast and it’s there for Americans to use and exploit. Those damn animals aren’t using it. Why should they have it? Like the great James Watt said, God wants us to subdue nature. I’ll be damned if some fish or butterfly is going to prevent me from making my millions.”

Reverend Delbert Dillman of the Third Evangelical Church of The Apocalypse said, “Thanks to President Bush, the Apocalypse is now closer then ever. We need to hurry up and use all of God’s resources before the end of the world. Can I get an amen?” 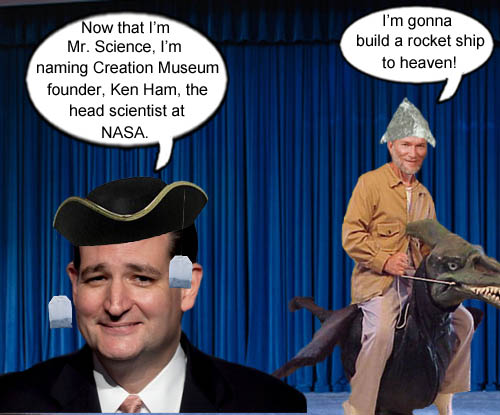 It’s been awhile since we’ve posted some of our old satire articles from 2003-2009. So we’re going to start posting them more often, maybe a couple times a week. To start things off, in the wake of the religious fallout from the Charlie Hebdo attacks, here’s one from our Religious BS file dated June 2, 2003.

Local man Hector Torres has claimed that the Virgin Mary has visited and blessed him in the form of feces in his toilet.

“I was taking a dump,” said Torres. “And I look down into the bowl and there was this turd shaped exactly like the Virgin Mary. So I call my wife Maria into the bathroom, you know, and I’m like ‘Look in the bowl’ and she said ‘I don’t want to look at your shit! What are you? Some sort of weirdo!’ and I’m like ‘No, look at that turd. It looks just like the Virgin Mary’ and she squints down into the bowl and says ‘Dios Mio! It’s a miracle!'”

Many people are now making pilgrimages to the Torres household to view the blessed turd. Last weekend, lines went out the front door as people clamored for a glimpse.

“I think Our Holy Mother is speaking to us through Hector’s shit,” said Maria Torres. “It’s like she is saying to us, ‘Even though you are dumped on, keep believing.’ We are truly blessed!”

Hector’s brother, Miguel, who also lives there with his wife and two kids, is tired of the attention. “The whole house smells like Tijuana, man. I can’t sleep at night. We can’t take baths or brush our teeth because we start gagging.”

Hector’s other brother, Pablo, who also lives there with his wife and daughter, said, “I’m tired of going down to the gas station to use the bathroom. This house only has one bathroom. What happens if I get the runs? Do I use a bucket or something? Should I go on the rug like the dog? And don’t get me started about all the people. What happened to our privacy? I miss my… quiet time.” He paused, wiped a tear from his eye and then added, “I may go to Hell, but if Hector don’t flush that thing soon, I’m going to flush it myself!”

What a way to start out the new year. The recent shootings at the Charlie Hebdo headquarters in Paris has struck a raw nerve with us here at the Bucket. We’re all atheists here. We tend to agree with Bill Maher’s statement on Jimmy Kimmel’s show that ‘“there are no great religions, they’re all stupid and dangerous,” Some people just do not seem to possess a sense of humor, especially religious fundamentalists. And isn’t it funny that religious fundamentalists seem to be…drum roll please…extreme conservatives. Go figure.  One of the most important lessons in life we have learned is the ability to laugh at one’s self. Obviously, religious fundamentalists in all major organized religions seemed to have missed that lesson. Once again, fundamentalists in Islam have gotten upset over cartoons. CARTOONS!!!! We’d just like to say to all fundamentalists in every major religion on this planet… LIGHTEN UP!!!! LEARN HOW TO LAUGH AT YOURSELF!!! GET A SENSE OF HUMOR!!!!

Ahhh! We’re just messing with you. We can’t tell you ‘holy guys’ what to do. Go ahead and keep killing all the people who don’t believe what you believe. That’s worked so well for the past couple thousand years. There’s nothing like the status quo. 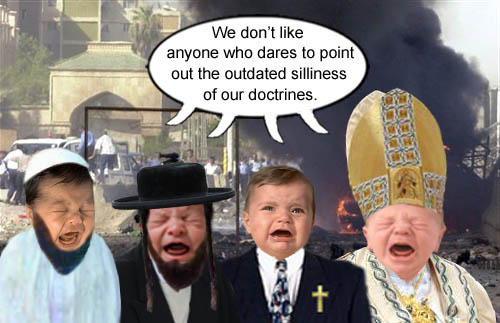 Fundamentalists from the major religions on Planet Earth agree on one thing: their senses of humor suck.