Let Them Get A Loan

Wow! Is Wilbur Ross clueless or what?! We’ve commented before about the Secretary of Commerce’s absolute lack of knowledge about foreign countries like Saudi Arabia. But this inane plutocrat showed off a stunning lack of empathy or insight into the plight of the average American, many who are living paycheck to paycheck. As the Trump government shutdown has dragged on for over a month, many federal employees were working for free! Some were having difficulties paying their mortgages, bills or even feeding their families.

Enter Wilbur Ross, spoiled plutocrat. Last week during the Trump government shutdown, Wilbuuuuurrr noted that instead of standing in line for food, federal workers ought to suck it up and go get a nice low interest loan while their not getting their paychecks. What sound financial advice! That’s right, poor person. Go try and get a loan that you probably can’t get because you’re already in debt up to your eyeballs. While you’re at it, maybe  get a loan for a yacht or maybe even by that dream cottage in the Hamptons. What a compassionate conservative!

This was Wilbuuuuurrr’s ‘Let Them Eat Cake’ moment and we think good ol’ Mr. Ed would probably be able to explain it best to this insipid, uncaring, out of touch bonehead of a plutocrat. 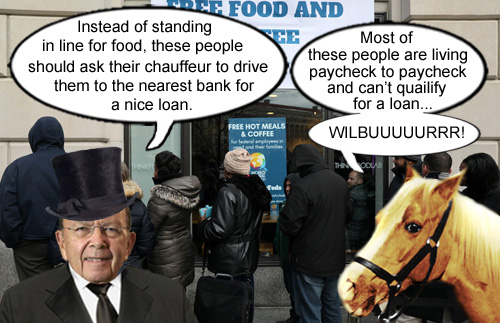 Talking horse and connoisseur of the name Wilbuuuuurrr, Mr. Ed, explains to Secretary of Commerce and ‘compassionate’ conservative plutocrat, Wilbuuuuurrrr Ross, that his suggestion to federal workers, who are barely squeaking by during Trump’s government shutdown, that they should just suck it up and get a loan was colossally clueless.

Senate Majority Leader and mutant Turtle Boy, Mitch McConnell, has once again pulled his patented disappearing act during the current record setting Trump government shutdown, which is coming up on the one month mark. We’ve remarked before on Turtle Boy’s uncanny ability to avoid responsibility when news first emerged about Russia’s involvement with the Trump campaign in December 2016. And who can forget after the 2012 election, the talks to avoid the dreaded fiscal cliff. We usually don’t like to repeat photo-toons, but when we got one that works, we stick with it.

McConnell refuses to act as a leader of the Senate and stand up to Trump. He has twice blocked votes against ending the shutdown. Apparently Turtle Boy doesn’t care about the government workers scraping by to pay their mortgages (or food) and working for free because hey…it ain’t hurting him. What a compassionate conservative! He’s also up for re-election in 2020 and since Trump is more popular than he is in Kentucky, he has courageously disappeared and decided not to rock the boat. Way to go, Turtle Boy!

America’s CEO/Dictator, Donald Trump, recently make a big deal that the Clemson national championship football team was making a visit to the White House. So did billionaire Trump break out the bucks to entertain these athletic lads with a fine dining experience? In true Trumpian fashion, he treated them to piles and piles of hamburgers and other junk foods from fast food chains. We guess he just assumed that since he loves this crap, everybody else must do it as well.

Trump also glaringly lied about the numbers served saying one time 300 hamburgers were served. Then he tweeted hilariously that a 1000 ‘hamberders’ were served.  So if Trump isn’t lying, he’s misspelling…hugely. There’s that old adage that says “You are what you eat.” Well apparently, Trump is a pile of junk food. 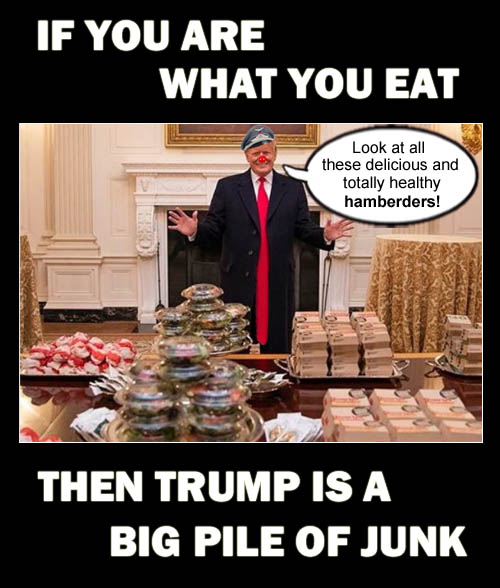 America’s CEO/Dictator and junk food and ‘hamberder’ aficionado, Donald Trump, proves that you are what you eat. 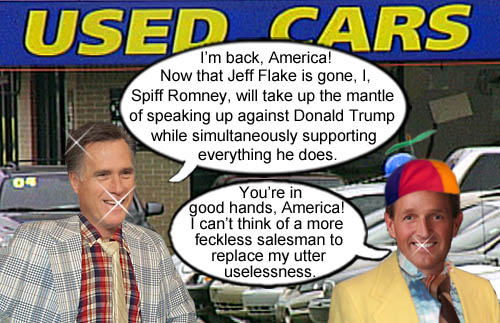 These Boots Were Made For Kicking Ass

We’ve decided to kick off the new year with a positive, non-Trump (or at least a minimal-Trump) post. Since the Democrats are now in charge of the House and Nancy Pelosi is set to become the Speaker of the House, we’re feeling a lot better about perhaps some justice coming to American CEO/Dictator and ill-tempered man child, Donald Trump, after two years of lies and corruption from his administration.

But in the mean time, let’s devote a little time to one of our favorite people here at the Bucket, Michelle Obama. The former First Lady has been making the rounds promoting her best selling book, Becoming. But she caused quite a sensation recently when she showed up to an event wearing a pair of $4000 designer boots. Now we adhere to the Henry David Thoreau mantra of “Simplify, Simplify” so we all think that’s a bit much to be paying for a pair of shoes. Staff member and living fossil Chester Einstein grumbles about paying $20 for a pair of loafers at Payless. But we’re also aware that conservative Republicans, who preach austerity to their sheeple, regularly go out and spend gobs of money on extravagant, expensive material possessions (see Newt Gingrich, Mitt Romney, The Bushes, etc…). For instance, take current First Lady Melania Trump…please. She regularly wears glitzy, lavish, ostentatious clothing: remember her ‘fashionable’ “I don’t really care, do u” jacket. But then Republicans bitch anytime Democrats spend even a little bit of money. Sean Hannity and the faux journalists at Fox News, a.k.a. the Republican Propaganda Network, threw a memorable hissy fit when Barack Obama ordered spicy mustard for his burger back in 2009. Oh the humanity!!!

So although we pinch pennies better than Jack Benny, we think Michelle Obama looked fantastic and we say “Go get ’em!”  Who can forget her classy speech from the 2016 election when she said, “When they go low, we go high.” For normal, sane humans who believe in civilized society, these words are inspirational and right in line with the golden rule. But right wing, conservative, ‘christian’ Republicans only mocked and derided her. So, we’d like to suggest an minor update to our favorite First Lady for dealing with today’s Trumpian Republicans: “When they go low…put on some shiny pointy toe boots and kick their f***ing asses.” 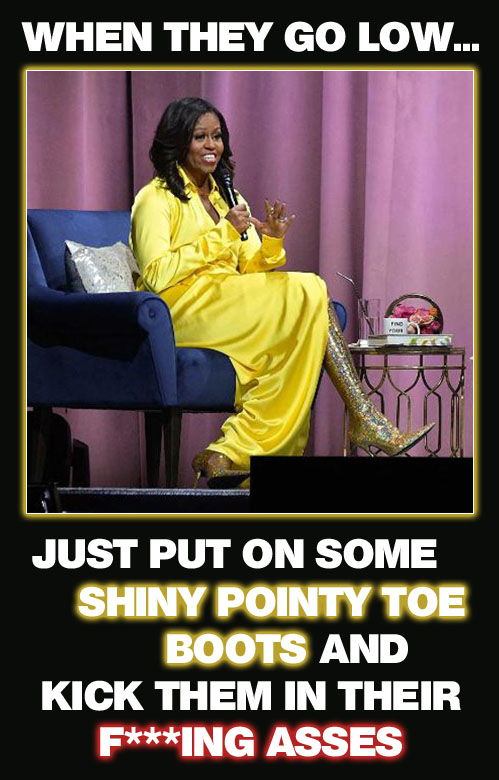 Former First Lady Michelle Obama has updated her mantra from the 2016 election to include some ass kicking of modern day Trumpian Republicans.