Well, the unthinkable has happened in America. What started out as a joke last June, has become a reality. Donald Trump has pretty much clinched the Republican Presidential nomination. Like other sane, reasonable folks, we’re completely surprised and a bit horrified at the ascendancy of this disingenuous, authoritarian megalomaniac. And naturally the blamestorming has commenced. Common scapegoats include the obvious choices like the Teabagger Republicans and corporate media. The Republicans have the gall to actually blame Obama. John Stewart has suggested it’s the Democrats. We here at the Bucket will go one better; we’re all to blame for this fiasco.

That’s right folks. Whether we want to admit it or not, we’re all responsible for Donald Trump because the orange rage monster is the epitome of capitalism run amok. We’ve commented before about the ugly predatory nature of unregulated capitalism.  Upton Sinclair documented it one hundred years ago in the book The Jungle and it still is applicable today. Trump has come to represent everything that capitalism holds dear; greed, avarice, egoism, ultra-competitiveness, selfishness and materialism. Most Americans who have been raised on the belief that capitalism is the only sensible economy for this planet, look to the self-aggrandizing, megalomaniac billionaire, who has had three trophy wives and scores of material possessions like houses, cars, planes, etc… and say “Hey! I want to be like him.” That’s the American way. The rich, greedy plutocrats dangle the carrot and the rest of us salivate and go after it. We’ve mentioned John Steinbeck’s quote about the poor seeing themselves as temporarily embarrasses millionaires instead of exploited grunts. These are Trump’s trumpeters; the temporarily embarrassed millionaires; and of course the plutocrats, like Sheldon Adelson, who will naturally support his fellow billionaire.

We here at the Bucket were kind of hoping that Bernie Sanders, the self proclaimed democratic socialist would have gotten the nomination. That would have made the election a referendum of sorts between democratic socialism against unregulated capitalism. According to polls, in a head to head showdown, Sanders thumps Trump.

We think it’s time that all Americans do a bit of self-introspection, especially conservatives. Conservatives generally don’t do this because in the conservative mindset, they are always right, hence no need to look at oneself in the mirror. Questioning your actions is bad and a sign of weakness. One must do what has been traditionally done forever and ever. And don’t even think of apologizing; that is absolute weakness and worthy of death. But is Donald Trump really who were are as a nation? Are we really like Trump? Are we a SEGUMUCA nation: a nation of Selfish, Egotistical, Greedy, Ultra-Materialistic, Ultra-Competitive Assholes? (Catchy eh?…[sound of crickets chirping]…hellllooooo) Isn’t it time we put the people’s health and welfare, the public good and the environment above profits and selfish, greedy materialistic desires? Maybe if we do that, we won’t look in the mirror, see Donald Trump snarling back and say to ourselves, “Holy Shit! How did we get so fugly!” 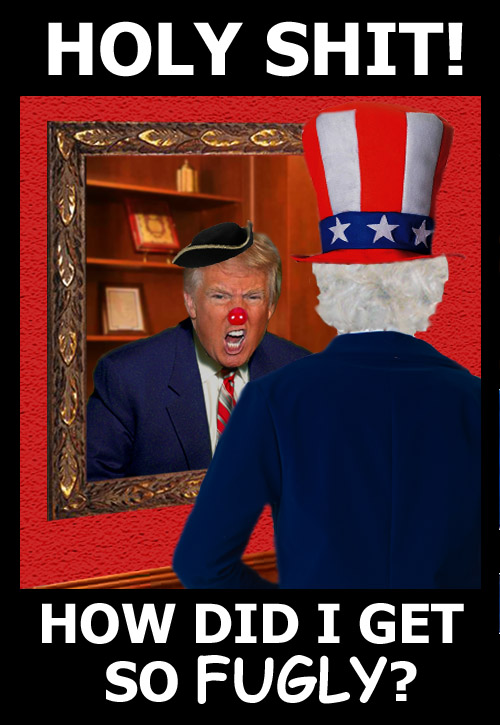 Uncle Sam recoils in horror as he looks in the mirror and sees that he has become a Selfish, Egotistical, Greedy, Ultra-Materialistic, Ultra-Competitive Asshole.