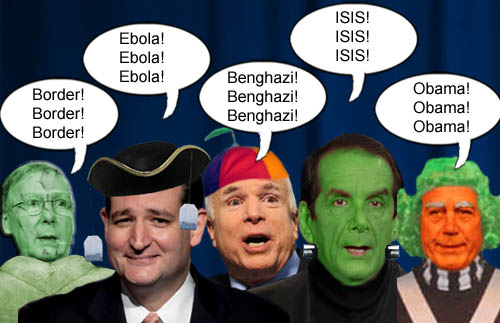 Former Republican President and the Picasso of the conservative GOP world, George W. Bush, recently popped his head up to provide his great wisdom on the subject of the ISIS/ISIL terrorists fighting in Iraq and Syria. Yes, in an interview with Fox News, a.k.a. the Republican Propaganda Network, it seems that Bush thinks that we never should have left Iraq in 2011 even though he agreed before he left office that troops should leave at that time. Remember folks, this from the man who dressed up in May 2003 in a flight suit and announced ‘Mission Accomplished’ in Iraq. This man boldly proclaimed that Iraq was a slam dunk and we’d be in and out in no time. Does he really think he holds any kind of credibility at all anymore? No wonder Obama doesn’t call him for advice. We think that good ol’ Dubya should just keep to painting pictures of himself in the tub.

Good ol' Dubya demonstrates why he should forget 'presidentin' and stick to painting pictures of himself in the bathtub.

The fine ‘journalists’ of the Republican Propaganda Network, a.k.a. Fox News have been going into overtime the last couple of years over the attack at an American compound in Benghazi, Libya in 2012, which resulted in four deaths. Of course, because these right wing conservatives are so…eh-hem… ‘unbiased and fair’, they conveniently fail to mention the thirteen Benghazi like incidents which happened under George W. Bush’s watch, which incidentally resulted in 97 deaths. That’s right folks; 13 Benghazis under George W. Bush. And of course, no one mentions Dubya’s biggest security blunder; the 9/11 terrorist attacks on New York, which resulted in 3000 deaths. We don’t usually post graphics from other web sites, but sometimes the graphics just say it all. Here’s a graphic that says what we want to say perfectly.

Republicans continue to whine over the Benghazi attacks while conveniently forgetting the massive security blunders of George W. Bush.