We just commented a few posts back about the growing liars club in today’s media and political circus. In the wake of the Brian Williams scandal, Fox News’ Bill O’Reilly was caught in a little lie of his own. O’Reilly criticized Williams for his lack of integrity while exaggerating his own war experiences in Argentina during the War in the Falklands, when he was working for CBS. Now, several former CBS colleagues have stepped forward to refute what O’Reilly claimed, calling him basically a lying sack of manure; something we’ve known for years.Will O’Reilly be suspended like Williams? Hah! Fox News will probably give a promotion and a years supply of loofah mitts. According to Republican Propaganda Network, it ain’t a lie if you believe it to be true. Ahh! That’s some responsible journalism! 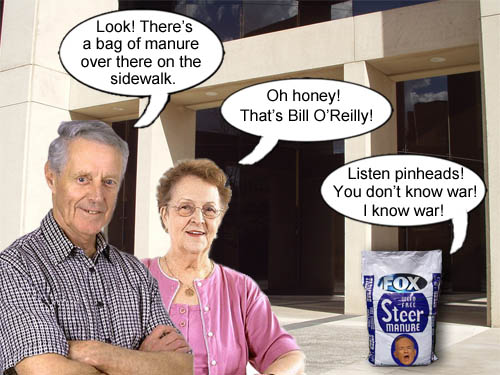 Fox News talk show host Bill O'Reilly, whose only goal in life is to look out for you, bloviates to anyone who will listen that he has first hand experience with war.

NBC recently announced that anchor Brian Williams would be suspended for six months because of his lying about being shot down in Iraq. Wow! Wouldn’t it be great if Fox News, a.k.a. the Republican Propaganda Network had that kind of oversight for their so called brand of journalism. Sean Hannity and Bill O’Reilly would never be on the air again. But of course, in the conservative Republican mindset, they never make mistakes. We guess it’s Brian Williams cross to bear for being a…eh-hem….’semi-responsible’ journalist.

Which brings us to the Bush Administration. How is it that a journalist is punished for lying and politicians like the Bushies, who knowingly lied to us about Iraq, get off scott-free?  We’ve posted this material before here and here.  But we’ve decided to take a page from the Bush Administration and repeat things ad infinitum until the sheeple get it. (See 9/11, War on Terror, everything Dubya said from 2001 until 2009, etc…) Every person in America needs to see this video because it proves that at least one very influential person in the Bush Administration knew the Iraq War would be a quagmire and went ahead with it anyway saying instead that we would be greeted as liberators. Bush and Cheney are liars and need to be prosecuted! PLEASE…take time out and view this video!

We absolutely love this video made by Vermont high school students. In it, they diligently and methodically point out how Fox News fails in fundamental journalism and ethical behavior. True, these kids may lack the polished delivery of a Bill O’Reilly or Sean Hannity, but they make their point. Kudos to these intrepid Vermont teenagers; A+++. As for Fox News; they get a big fat F in journalism and ethics. However, Fox does get an A in propaganda; Joseph Goebbels would be proud.