Football season is in full swing here in America. Football is arguably America’s most popular sport and we’re certainly fans here at the Bucket. The NFL is gaining popularity not only in America, but officials are contemplating locating a franchise in London in the near future. College football has grown to more than just a sport; for some regions it’s a religion. Not only that, college football has became a huge business. Football rakes in the revenue for most colleges and universities. Some teams, like Arizona State, even have several different uniforms and helmets. It’s a far cry from the ’60s, when most teams just had simple one color shirt one color pants and one color helmets with maybe a stripe and a logo on the helmet.

We think the funniest thing about football and collegiate sports are some of the school mascots. For instance, the Banana Slugs of the University of California at Santa Cruz or the Artichokes of Scottsdale Community College evoke a hilarious image, especially if you saw a big banana slug or an artichoke depicted on a football player’s helmet. So in this vein we present a new feature, Helmet Hilarity, featuring the helmets of little known collegiate teams and their unconventional, zany mascots. 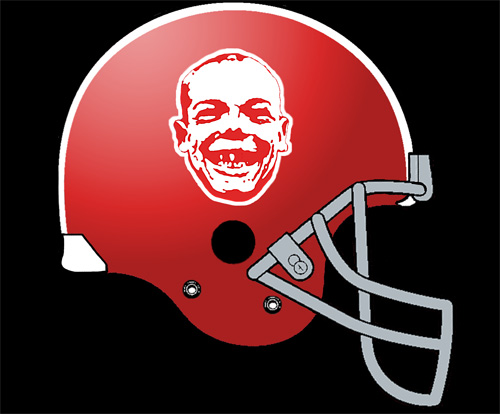 On Wednesday, Congress finally made a deal to fund the government and increase the debt limit, which was clearly a victory for President Obama and the Democrats. Right? Not so fast, America. Shutdown architect and smuggest Senator alive, Ted Cruz, declared that the shutdown was a great victory…for the Republicans???!!! Ah yes! The delusion continues… 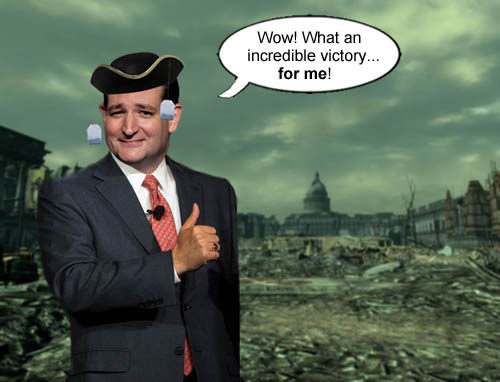 Teabagger patriot and smuggest Senator alive, Ted Cruz, basks in the glow of his recent accomplishments.

The Fog Of Delusion

Well, the GOP shutdown clusterf*ck continues with no end in sight. According to polls everywhere, the Republicans are becoming less popular than syphilis. But Teabagger Extraordinaire, Ted Cruz, remains not only optimistic, but downright gung-ho. You see, according to the No-class Cruzer’s polls, the Teabagging Republicans are the most popular phenomenon since hula-hoops, transistor radios, crew cuts and slavery. Apparently, the right-wing bubble doesn’t permit 21st century reality to enter and is instead perpetually stuck in the 1950s or 1850s, take your pick. But have no fear America. Ted Cruz, Sarah Palin and Michele Bachmann are here to guide us to the Rapture. Or as Bachmann put it, “Maranatha Come Lord Jesus, His day is at hand.” Great! Just in time for Halloween! 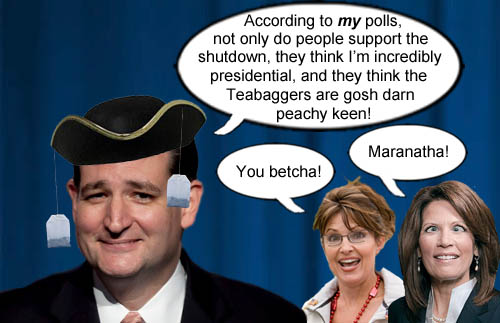 Back in May, Senator Harry Reid correctly called Senator Ted Cruz “a schoolyard bully” and what did the smuggest Senator alive do? He copped a “what? little old me?” attitude.  Fast forward to this past week and you’ve got the No-class Cruzer pulling the same old crap stating that the Democrats want to shut the government down despite that fact he gave a 21 hour filibuster indicating that the Republicans would shutdown the government unless Obamacare was defunded.

But the funny thing is that the No-class Cruzer gave the world a hint back during the recent Syria crisis on how to deal with these Teabagging GOP bullies who turn into crybabies whenever they don’t get their way. In response to Syria’s action, Cruz said, “Bullies and tyrants don’t respect weakness.”  Boom! There it is! Hopefully, the Democrats will keep the spine they’ve recently discovered and won’t let the wittle Teabagger babies get their way on their wittle temper tantrum. 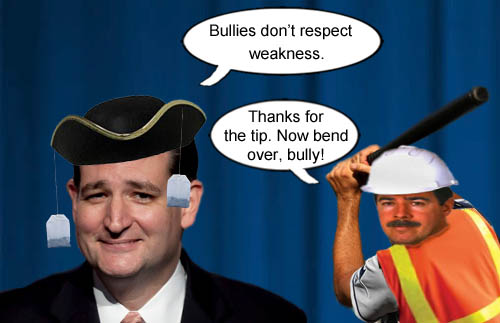