The Donald Trump charade continues as the neocon media circus focuses gigantic amounts of attention on the inanity spoken by the megalomaniac billionaire. This past week, ‘the Donald’ made headlines by not only gaining in the polls, but by throwing well respected Hispanic journalist Jorge Ramos from his news conference. Hmmm….not the best way to ensure the Latino vote. But that doesn’t matter to the darling of the Tea Party. No sir. Accordingly to the script planned by the corporate owned neocon media and their lackeys in congress, everything is going exactly as planned. Donald Trump is looking outrageous right now to everybody by design. The crazier he sounds now the better for the corporate backed candidates Scott Walker and especially Jeb Bush next year when it counts. This latest row with Ramos is a prime example. Jeb Bush is fluent in Spanish and supposedly ‘well versed’ in Latino affairs. When presented with a choice of the xenophobic Trump or Bush, the choice for a conservative Latino is naturally going to be Bush. Remember, the neocon media like Fox News are masters at propaganda and we’ve got 14 months to go before the election. They can manipulate the minds and decision making of scores of sheeple in that time. It’s also helping the GOP cause that Trump is agreeing with many things Democrats are saying (the Iraq War was a mistake, Dubya was horrible). This makes it easier for Fox to spin that Trump is really a closet Democrat and shouldn’t be trusted.

Yes, Trump is the perfect sacrificial lamb for the GOP because, it doesn’t matter if his campaign fails or not. He’ll still be a big shot even if he loses the nomination. This is because he is a master at media manipulation, self-promotion and self-aggrandizement. In Donald Trump’s mind he will always be the best human being ever, even if the rest of us decide he is a chump. 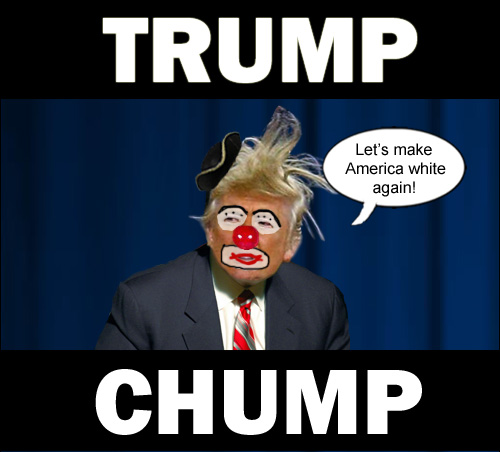 For many sane Americans, the decision on Donald Trump is already clear. 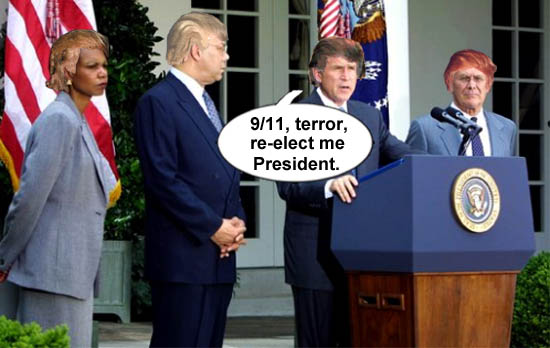 In mid-July, the United States and five other world powers, Great Britain, France, Germany, Russia and China, reached a historic agreement with Iran which will significantly stifle Iran’s ability to make a nuclear device while easing sanctions, which were destroying Iran’s economy. Most people hailed this as an historic accord. Scientists recently proclaimed their support for the deal as well as retired generals and admirals. And yet, the agreement is in danger of not passing the Senate. Hmmm…..given the history of the Republicans dealing with the Obama administration, we wonder who could possibly object to this ground breaking piece of diplomacy? Hmmm…who could it be?

That’s right folks. The whiny, sucky, crybabies known as the Republican party and a few war mongering Democrats like Chuck Schumer, plan to vote against it. You see it’s pretty simple. Obama supports it, so the GOP is against it. It’s been that way since 2009. Plus, most of the Republicans are on the payroll of the military industrial complex defense companies so naturally they follow the slogan that ‘Diplomacy is for wimps. War is just good business’. And senile Senator from Arizona John McCain, just wants to ‘bomb, bomb, bomb, bomb, bomb Iran’. The Republican’s objection to the Iran deal is proof that they shouldn’t be allowed anywhere near the White House or to handle foreign relations. Not unless we want more backbreaking, money sucking quagmires like Afghanistan or Iraq. Yep, the same people who brought you the wars in Afghanistan and Iraq want to bring you a glorious new quagmire in Iran. 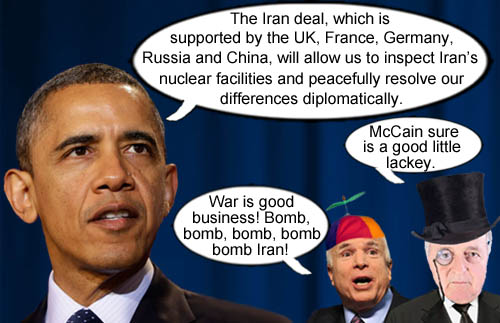 Much to the dismay of President Obama, military industrialist plutocrats and conservative Republicans prefer war to diplomacy when it comes to Iran, because, you know, war is good business.

We recently commented about the unbelievable poll that stated that more people viewed George W. Bush favorably now than President Obama, despite the fact that Obama has cleaned up the colossal mess that good ol’ Dubya made here and abroad. Here’s an article from our April 25, 2004 edition which may explain this phenomenon. It seems that people were actually comforted by the Bush Administration’s lies and deceptions.

According to recent polls, George W. Bush’s approval ratings have improved, despite revelations of deceptions and misinformation from the White House concerning the war in Iraq by Paul O’Neill, Richard Clarke, John Dean and Bob Woodward. The polls indicate that having a lying, deceitful president leading the country comforts many Americans.

Dwight Rodman of Festerville, Oklahoma, said, “That’s what Presidents do. Nixon lied about Watergate. Clinton lied about having sex with all those women. Now Bush has lied about WMDs in Iraq. It’s just the American way. Now if someone told the truth, then I’d worry.”

Mabel Ellis of Port Drudgery, New Jersey, said, “At least President Bush doesn’t have sex with nubile young interns. I can live with a multi-billion dollar war from which we have no clear cut way of exiting and will put us in excruciating debt for years to come. But having sex is something I will not tolerate.”

Theodore M. Farnsworth IV of Crudopolis, Texas, said, “I’m the CEO of a major energy corporation. The President’s lies are keeping the attention off me and all the environmental damage I’m doing by fracking. Four more years!”

Byron G. Caldwell of Big Spud, Idaho, said, “I’m the CEO of a major logging corporation. The President’s lies are keeping the attention off me and all the regulations that are being relaxed so I can plunder America’s forests. Four more years!”

Mildred Dunwiddy of Backwater, South Carolina, said, “Oh, its just a little white lie. Besides, I think the biggest problem this nation is facing is that slut Janet Jackson and her malfunctioning wardrobe.”

Phil Smoots of Gator Crossing, Florida, said, “How can America be worrying about a quagmire in Iraq, when people of the same sex are getting married? I just don’t get this country.”

Jerry Scheissner of Fuddsworth, Missouri, said, “If things are going so bad in Iraq, how come we don’t see any pictures of coffins? How ’bout that, smart guy!”

Rev. Aloysius T. Terry of Piggettstown, Mississippi, said, “I’m an evangelical minister and I say President Bush is leading us one step closer to Armageddon and the Rapture. Halleluiah!”