Time To Update The DB Connection

Much has been said about the right wing’s ‘War on Science’ in recent years (Links here and here and here). There is definitely a love connection with Republicans and religious conservatives but that’s not surprising. Most religions are authoritarian by nature, where all believers are supposed to follow their ‘exalted’ leaders or suffer the consequences. Right wing politicos also obey the hierarchy of authoritarianism. A prime example of this is when then Vice-President Dick Cheney, shot an acquaintance, Harry Whittington, and Whittington apologized to Cheney. And of course any criticism, even if it valid, logical and reasonable, is evil because it goes against the vaunted authority figure: for example, the catholic church’s support of child molesting priests. Or the religious right saying that evolution couldn’t possibly be real because God created man in his image. Of course, they never consider that maybe man made God in his image.

A huge criticism of religion is that while religious texts from thousands of years ago may provide some insight into human nature, (human nature really hasn’t changed since then), it is woefully inadequate in explaining the mechanics of the universe. So much information has been obtained through scientific inquiry and study in the last 400 years alone, in all branches of science, that one really has to question the logic of believing in traditions established when the the knowledge base of the universe was so small. Perhaps it’s time for some people on planet Earth to update their database connections. 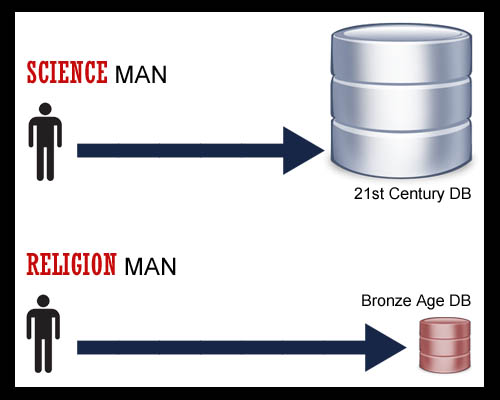 Some denizens of planet Earth need to update their database connections.