Cheney Knew Iraq Would Be A Quagmire and HE LIED!

We’ve posted this material before, (here), but we’ve decided to re-post it because of Uncle Dick Cheney’s recent re-appearance in the news media blaming the Iraq War on Obama. It’s amazing and shocking to us that this video only has one million views.  Every person in America needs to see this video because it proves that at least one very influential person in the Bush Administration knew the Iraq War would be a quagmire and went ahead with it anyway saying instead that we would be greeted as liberators. Bush and Cheney are liars and need to be prosecuted! PLEASE…take time out and view this video!

A Dick Says What?

Guess who’s reared his ugly head again. That’s right, everyone’s favorite Dick, Uncle Dick Cheney, has come out of hiding to share his wisdom with the rest of the world. This so-called foreign policy expert, five years removed from his failure in Iraq, popped up on media shows along with other chicken hawk neocons like Paul Wolfowitz, Bill Kristol and everyone’s favorite crusty old curmudgeon John McCain. Yes these same people who failed so miserably with that clusterf**k called the Iraq War had the audacity to criticize Obama on getting us out of the Iraq Quagmire and then pinning the recent insurgency in Iraq on him. The architect of that failure, Uncle Dick even said “Rarely has a US president been so wrong about so much at the expense of so many.” And no he wasn’t talking about George W. Bush. Of course, this was met with a huge WTF by most competent, clear thinking individuals. Even Fox News’ Megyn Kelly, in a rare fit of journalism, called Uncle Dick on his BS. We like Secretary of State John Kerry’s response to Uncle Dick’s buffoonery. All we have to say about Mr. Cheney is  “WHAT A DICK!”  And as for all the other neocon chickenhawks; we think they should move to Iraq, don some armor, go to the front lines and show us all how to win the war. 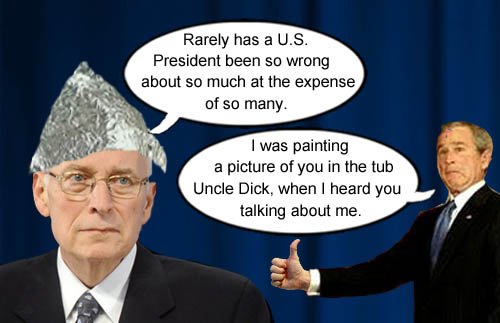 Dick Cheney has resurfaced to show his displeasure for a man who was a complete failure as a President.