Austerity seems to be the big buzz word in America right now with the economy limping along and no real turn around in sight. People are tightening their belts(if they have them) and looking ways to make ends meet. Here’s a photo-toon from December 29, 2008 issue which depicts the possible return of a fashion option from the Great Depression. 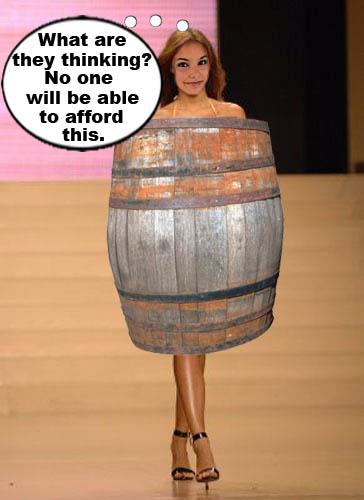 Fashion designers have brought back an old favorite for the current economic downturn.

This was one of our favorite features back in the day. This is from our October 6, 2006 issue.

A favorite feature nowadays in many papers across the country is one presenting local citizens who claim that they look like well known celebrities. Well we here at the Bucket know a lame-ass idea when we see it. We’ve asked residents of Cactus Corners, Arizona which celebrity they resemble. The results will astound you!

Dr. Phil McGraw has taken television and America by storm. Thanks to his exposure on The Oprah Winfrey Show, he was given his own television show in 2002. He’s even appeared in that crowd pleasing movie, Scary Movie 4. Every afternoon, Dr. Phil offers folksy advice for living to troubled, depressed, and gullible viewers. He’s also written several books offering common sense counseling to the confused masses. We’ve read up on Dr. Phil’s pearls of wisdom over the years and we’ve come up with a list of his top no nonsense ways to improve your life.

We feel like remembering ol’ Dubya: he was always good for a laugh. Here’s one of our favorite photo-toons from our July 19, 2007 issue, just a month after Bush had visited Pope Benny in Vatican City. 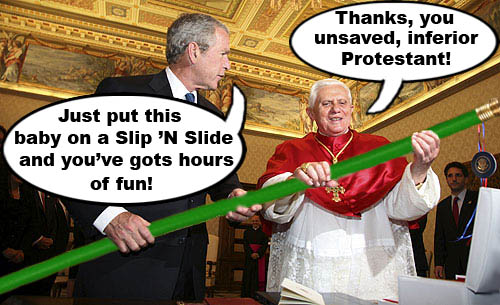 Recently, President Bush presented to a grateful Pope Benedict XVI, one of his favorite toys.

Here’s some more BS, this time of the political variety.  We’ve refrained so far from commenting on the upcoming 2012 Presidential election because it’s still 2011. Remember back in the ’60s and ’70s, candidates usually didn’t start having debates until at least the summer before the election. Now we’re having them a year and two months before the election. And political pundits are declaring that it’s too late for Sarah Palin to run. We’ve got 14 months left. Everyone knows Ms. Ubetcha’s going to end up running. Yes, the 2012 election is gearing up to be one big joke. With that in mind, here’s an article from our May 12, 2007 issue.

The 2008 Presidential Election is heating up as the American electorate must choose their next President with a scant 18 months left until the general election. Both Democratic and Republican candidates have fielded questions about the issues in the hopes of setting them apart from each other. Most Americans unbelievably still haven’t made up their minds yet but many offered up their impressions of the candidates so far.

Democrat Ken Brewster of Maltby, Delaware, said “I’m a big fan of cookies so I like Dennis Kucinich. He looks just like a Keebler elf. Hopefully, he’s got some of that elfin magic.”

Texstar Oil Co. CEO Charles F. Townsend IV said, “For my money, I like George W. Bush. He’s done everything we’ve paid him to do. We’ve posted record profits since he’s been in office and he’s turned back just about every environmental regulation that hinders us from cashing in big time. What? He can’t run again because this is his second term. Well, we’ll just see about that. Kendra! Bring me my checkbook! I’ve got a Constitution to mold to my liking.”

David Wichita of Topeka, Kansas said, “I’m voting for Sam Brownback. He doesn’t believe in evolution. He knows that the only way to change your lot in life is by the power of prayer. Well that and sending at least one hundred dollars a month to the good Reverend Bilkwell’s ministries and their prayer specialists. Their prayers count extra don’t you know.”

Noel Chambers of Delshire, New Hampshire, said “I’m voting for that electrifying Democratic candidate from 2004. He was absolutely unforgettable. Oh, what was his name? I can see him so clearly in my mind’s eye right now. He was really wooden, had great hair and had a monotone speaking voice. Gore!…no wait that was 2000. Dukakis!…no that was in ’88. Mondale…no that was in 1984. Kerry, that’s it. Wow! I just had a revelation. I know why the Democrats have lost so many Presidential elections since 1980.”

Janice Meese of Conrad, Oklahoma said, “Most people think that as a woman, I’m going to vote for Hillary Clinton. But I believe a woman just shouldn’t be President. According to the Bible, the woman’s place is in the home, raising the kids, and cooking the meals. Why if I don’t have dinner on the table at 5:00pm when Jim gets home from work, there is hell to pay, believe you me. And I never question anything Jim says. He’s the man of the house and is therefore always right. Besides, a woman just won’t be able to protect us from those fanatical Muslims. Can you believe how badly they treat their women?”

Drag queen, Nina Broadway of San Francisco, California said, “Giuliani speaks to me for some reason. He’s the only candidate in either party who’s dressed like a woman… oops…that is besides Hillary. But then again, Rudy looks better in a dress than she does.”

“I like that Mike Gravel guy,” said Nick Yankowski of Milwaukee, Wisconsin. “He’s kind of cross between Fozzie Bear and Admiral Stockdale. Remember him. He was Perot’s running mate in ’92. Remember when he asked during the debates, ‘Why am I here?’ Hah! Hah! We need those kind of madcap antics in this election to keep our minds off what a mess this country is in.”

Staunch Republican Joe ‘Digger’ Belsky of Laughton, Illinois said, “I know who I’m not going to vote for and that’s Bill Richardson. That guy advocates diplomacy, fiscal responsibility and energy independence. Then he says the first thing he’s going to do is withdraw from Iraq and then he’s going to establish a sound, environmentally friendly energy policy. I mean, what kind of moonbeam, wacko, nut job is he?”

World renowned German plastic surgeon, Dr. Hans Gesichtfuk, has announced a radical new kind of plastic surgery where cell phones are implanted into the patient’s skull and wired directly to the brain thus eliminating any cumbersome headgear or wires.

“Ya, dis is a radical new surgery dat vill revolutionize plastic surgery as ve know it,” said Gesichtfuk from his office in Munich. “Before you know it all de über celebrities like Britney Spears, Madonna and Tom Arnold vill have cell phones implanted on the side of deir faces. Dis is just de first step tovard creating de perfect bionic human; a six million dollar man or voman if you vill. Soon ve vill be intergrating iPods, iTunes, and iPhones into human beings. It is truly a golden age for cutting edge plastic surgeons like me. I’m not just going to be rich, I’m going to be über rich.”

Many Americans can’t wait to have the avant-garde surgery. John Langley III of West Haverbrook, New York said, “I’m a big self improvement buff. I love making myself better. I’m going to be the first in my country club to get this surgery. Then I’m going to get a solid gold penis implant.”

Fred Griffin of Las Vegas, Nevada, said, “My friend Vinny is going to get the surgery, too. Man, we’re going to clean up at the poker tables: Vinny sits at the table and I spy on everybody. If I wear a tin foil hat, people will think I’m a homeless guy just talking to myself. This is a foolproof plan that can’t possibly fail!”

Tiffany George of Scottsdale, Arizona said, “I know I’m only in high school, but I’ve just got to get this surgery. I’ll be like, so popular! Maybe instead of getting his stupid, life saving, heart bypass surgery Daddy can buy me this for my birthday instead.”

Impress your friends with the ultimate in alternative energy chic. Yes, your personal nuclear reactor is a great conversation piece and will add a certain glow to your living room. These mini power plants come in three fantastic styles, Three Mile Island (shown), Chernobyl, and Diablo Canyon. And don’t worry about the dangerous, radioactive byproducts. Just place it in our stylish lead lined waste sacks, toss it in the garbage and it’s not your problem any more. Be the first on your block with a nuclear reactor from the leader in trendsetting fads, Hamlacher Schmamlacher. Sale Price: $1.2 billion Usually ships in three to four weeks. Locations in the Middle East and Asia may take longer.

Shows Tonight on The Golf Channel

Shows Tonight on The Golf Channel 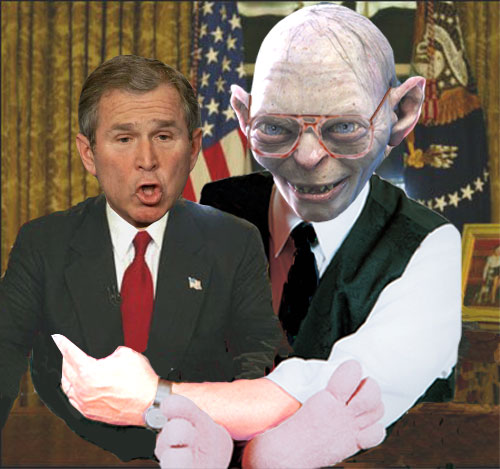 Continuing with our Dick Cheney retrospective…

Here’s a photo-toon from our March 11, 2007 issue. At that time, Afghanistan had set a record in opium production and that it had increased ever since the U.S. occupation started in 2001. Production has dropped since the all time high in 2007, but it is still higher than in was before the occupation. Here’s a link to a Wikipedia article about the subject. Well at least the occupation has been good for one business besides the defense industry. 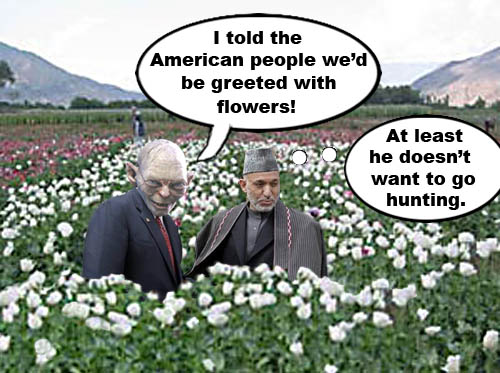 Vice President Dick Cheney recently visited with Afghanistan President Hamid Karzai and together they walked the Afghan poppy fields where opium production was up from 4100 tons in 2005 to a record 6100 tons in 2006.