It’s obvious that our nation is not a functioning representative democracy anymore. Thanks to the recent Supreme Court Citizens United and McCutcheon vs FEC decisions, we can safely say that the United States of America is a corporate oligarchy, where only the wealthiest corporations have a say in what happens to America. So contrary to what the Republican say, big government isn’t the problem; corporate America controlling the government is the problem. After all, Republicans and Democrats nowadays are just corporate lackeys; doing their corporate overlord’s bidding for campaign contributions. It is truly sad to see that America is as corrupt as a banana republic. The whole idea behind the Republican’s ‘government is the problem’ con is to fool the masses into thinking that relaxing government regulations and oversight on corporations is a great thing for freedom when in fact it is the worst thing that can happen. Let’s be honest and frank here; capitalism breeds greed, avarice and selfishness. These traits are counter to everything a supposedly ‘christian’ nation holds dear. Without regulations, humanity’s greed runs rampant and our economy and society truly becomes a rat race. It’s shocking that just living basically and simply today costs an arm and a leg. People everywhere in the past ten years have gone under. The middle class has all but disappeared. In order to survive, people have to raise rates, fees and prices to exorbitant levels just to break even. Just taking a beloved pet to the vet can bankrupt a person. It’s gotten to a point where you have to wonder whether it’s capitalism anymore or cannibalism. Is this really what we want for our society? 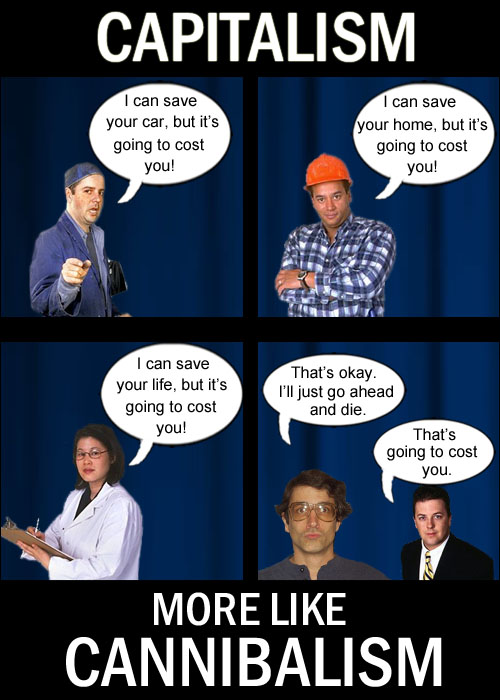 Capitalism: devouring the humanity from humans since the Middle Ages.