Republicans May Be Right

Republicans have been vocal in recent years about voter ID laws despite the in person voter fraud being virtually non-existent. (Another article here.) Now, voter ID laws, like the one in North Carolina, are being struck down because basically they are an attempt by Republicans at repressing certain people like minorities from having access to the voting booth.

But with the rise of Donald Trump as the GOP nominee for President, maybe we should have voter restrictions…against Republicans. Let’s say if a person voted for Dubya, Ms. Ubetcha, Sarah Palin and is in the process of supporting the megalomaniac, orange haired rage monster then that person clearly lacks the intelligence to astutely choose a candidate who will run this great nation properly. We would suggest that this person stick to the more basic skills in life like drinking beer, watching wrestling on tv and belching on the couch. It would be a win-win for everyone. 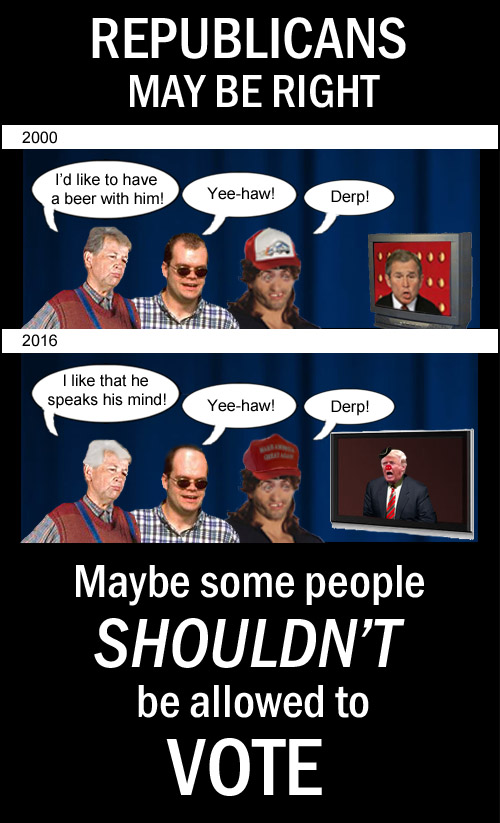 Given the choices Republicans have made over the last 20 years, maybe some people shouldn’t be allowed to vote.

The Vice Presidential candidates for the Democrats and Republicans couldn’t be more different from their respective running mates. Mike Pence is pretty much a modern day Puritan and the complete opposite of the bombastic and coarse Donald Trump. Tim Kaine is a walking Disney character and his squeaky clean demeanor is in contrast with the popular perceptions of Hilary Clinton as untrustworthy. Amazingly, the same adjectives are being used to describe both candidates: bland, boring, dull and our favorite, milquetoast.

We think the upcoming debate between the two candidates could be one of the biggest snooze-fests ever. Of course, it will probably be one of the most polite political events ever, too. We do have a bit of advice for the Democrats. If the Democrats don’t want another Dukakis-in-a-tank moment, do not use Kaine as an attack dog. Use Biden, Bill Clinton, Bernie Sanders or Obama to rip Trump a new one. Kaine is a nice guy. Let him be a nice guy. When he tries to be mean…it just looks bad. 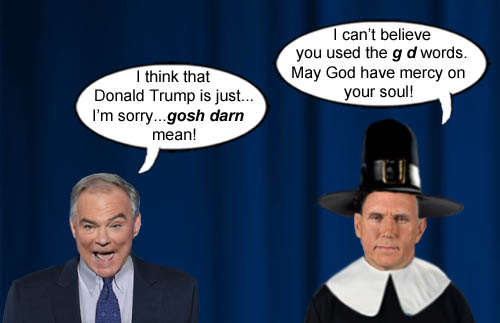 Here’s a shocker: Donald Trump said something outrageous! In keeping with his daily blathering of nonsense, the megalomaniac, orange haired rage monster said recently that he’d love to debate, “But I have to see the conditions”. Yeah…right! Given the Donald’s penchant for wrestling in the past, we here at the Bucket have an idea of what kind of debate he wants; a no holds barred wrestling match with Hillary. Just think of the ratings! But be sure to keep an eye on ol’ hound dog Bill and Melania at ringside(wink, wink). 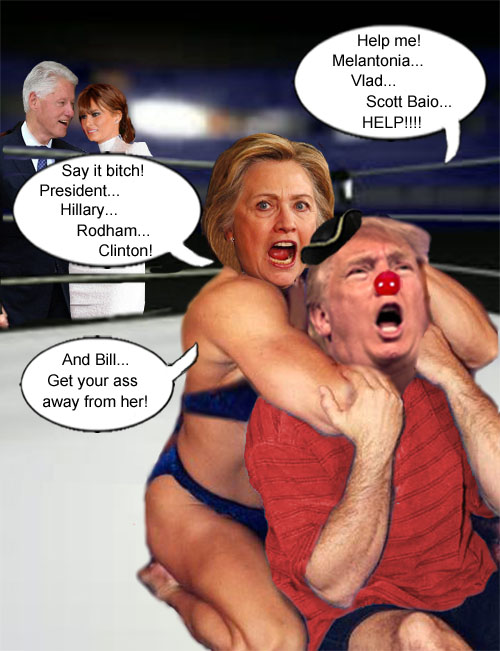 Democrat Hillary Clinton puts Republican Donald Trump in a headlock in the first ever Presidential Debate/Wrestling Match while their respective mates, Bill Clinton and Melania Trump, get to know each other at ringside.

The election is less than three months away now and according to polls, Clinton has opened up a sizeable lead over Republican nominee, megalomaniac Donald Trump. But Donald Trump has a crafty plan; just claim the election was rigged and get his echo chamber at Fox News, a.k.a. the Republican Propaganda Network to relay and repeat the message ad infinitum to the sheeple who watch it and bingo! – any result that doesn’t turn into a Trump victory is invalid.

We saw this coming back during Con-a-thon 2012, when Donald Trump declared the election was rigged and said he would start a revolution. But we never dreamed in a million years he would actually become the 2016 nominee. He and all Republicans will no doubt use the same old inevitable con that conservative Republicans always use; look at the electoral map and say “Wow! Look at all that red! How could the Democrats have won, when the majority of the map is sooooooo red!” They once again take advantage of American’s poor math skills and inability to grasp that square mileage doesn’t equal population.

To truly grasp the electoral map, one needs to go to Nate Silver’s election site fivethirtyeight.com.  He has an electoral map that gives the true representation of what’s happening with the electoral vote, which is based on population, and not the square mileage. So yes, for example, Montana has a lot of square mileage(147,164), but there are more people living in the 372.4 square miles of San Diego California (population: ≈ 1.356 million) than in the whole state of Montana (population: ≈ 1.024 million). So these calls by Trump and his fellow con artist Republicans stating that there’s no way he should be losing are absolute bunk according to Nate Silver’s site. Trump is losing and losing badly. If you have any doubts, DO THE MATH! 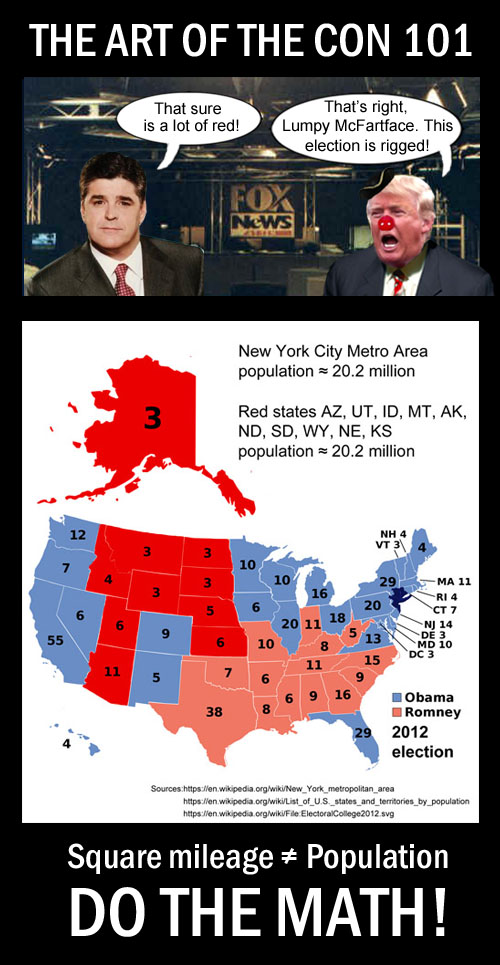 Conservative Republicans and their cohorts in the corporate media are trying once again to push the old square mileage equals population ploy on its gullible audience.

Thanks to the disastrous Trump campaign, we’re given on a daily basis such a plethora of gaffes and blunders to choose from, the satire just writes itself. Take for instance, Mike Pence recently stating that name calling has no place in politics; this from the Vice Presidential candidate of a man who’s made his living for the last year calling his opponents childish nick names like Lyin’ Ted, Little Marco and Low Energy Jeb Bush. We think ol’ Puritan Pants is a bit irony impaired. 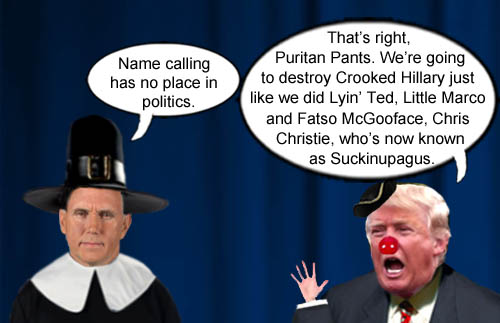 Irony impaired GOP President and Vice President candidates, Trumpy McSmallHands and Puritan Pants blather on about how name cailling has no place in politics.

Well folks, Donald Trump had a really bad week. Speaking of train wrecks, we’ve dug up another appropriate rant by the Bucket’s resident crusty curmudgeon, Chester Einstein. In it, he complains about the abundance of reality TV shows which revel in people’s crashing, burning and wrecking all for our amusement. We think this rant was ahead of its time considering the current disaster that is the Donald Trump campaign.

It’s April again in Cactus Corners. The temperature is almost one hundred degrees and it you haven’t got your air conditioner working yet, you’ll probably be sweating your ass off this summer. I’ve been trying to figure out these past few months how so many people got duped into voting for that walking disaster area Dubya and it got me thinking. I’ve observed what’s on television, what’s in the news, and what’s going on in general in this country and I’ve come to one conclusion; Americans love train wrecks.

Now those of you who have read my columns before are probably saying, “You’re just a cranky, old fussbudget. Shut up you old coot!” Well, dag nab it! Just hear me out. Look at the crap that’s on television nowadays. We get our jollies watching people eat maggots, reindeer testicles and slop we wouldn’t feed our sewer systems. We love watching people self destruct and getting voted off an island or kicked out of an apartment or dragged through the muck by an oxen in a wacky race around the globe. What’s next, a reality show where the losers get the chance to catch live ammunition?

And what the hell is it with our obsession with celebrities. Now Oprah and Jerry Springer I can understand. They’ve both got moxie up the ying-yang, I tells ya! But Anna Nicole Smith, Ozzy Osbourne and Paris Hilton? These people can barely dress themselves. It’s a miracle Osbourne can even sit in a chair. I’m not sure Anna Nicole even has a brain. I’m sure it’s just ganglia. And that Paris Hilton and Nicole Ritchie are nothing but stone cold hoochies! They get through life by batting their eyelashes, flashing a little leg and showing their ample, young, cleavage. Wait! What the hell am I complaining about? I like it when they do that!

And what about the big celebrity trials of the last decade; O.J. Simpson, Robert Blake, Martha Stewart and that freak Michael Jackson. These trials have been three ring media circuses. I mean people were cheering O.J. on while he’s driving down the freeway, running from the police. Jacko admits he likes to sleep with boys and people are rooting him onward. Those ubiquitous entertainment shows were covering Blake like he’s Jesus H. Christ. Hey everybody! Look at the celebrity in trouble! Let’s watch the wreckage!

Speaking of wreckage, I’ve just seen Growing Up Gotti. What the hell is that! Just because she’s a gangster’s daughter who’s richer than the Vatican, we need to watch their everyday life? Now that Victoria Gotti is pretty hot, but those kids of hers need a good spanking! They gave me an Excedrin headache! Maybe I’m just a simple cactus groomer/web satirist, but people who are poor are interesting, too. Why don’t we see reality shows about Fred Markowitz, the plumber; Gladys Rogers, the social worker; Austin Jackson, the sandwich artist? All we get on television these days is stupid reality shows about incredibly rich, stupid people.

Our society seems to worship stupidity nowadays. What’s one of the most popular shows on television? NOVA? American Experience? No! That airhead Jessica Simpson and her mindless reality show. Even on The Tonight Show with Jay Leno, or Lamo as I like to call him, that Jaywalking segment celebrates mediocrity. The funniest people are the ones who completely screw things up. These human train wrecks don’t know history, science, math, geography or anything else for that matter. Are you paying attention Dubya? But hey, they may be stupid, but they sure are funny! Sure they’re going to crash and burn, but let’s watch and be entertained.

Well, I’ve ranted enough for today. I’ve got some cactus to groom on the back forty. Maybe I’ll take a video camera with me and tape myself running into a cactus. Who knows? Maybe I’ll get my own reality show. Or better yet, get elected President. 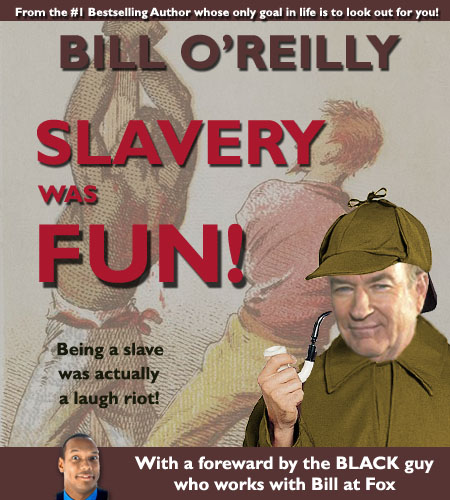