Christie Sucks Up To Trump

Former GOP presidential candidate and Jersey boss, Chris Christie, did an about face this past weekend and endorsed Donald Trump, fueling speculation on why a so called ‘establishment’ candidate would endorse someone who eviscerated him so thoroughly during the debates. Just another wacky turn of events in the masquerade of democracy called Con-a-thon 2016.

Our favorite tidbit from this though is the supposed humiliation Christie received from Trump during a Tennessee rally, when a hot mic caught Donald Trump telling Christie to ‘Go Home‘. It’s mostly taken way out of context, but it’s still funny. But that’s what life will be like in America if Trump is elected President. Unless you give him your undivided, sycophantic support, he will trash you to no end. And then he’ll trash you for giving in to him; a no win situation…kinda like being in the mob. 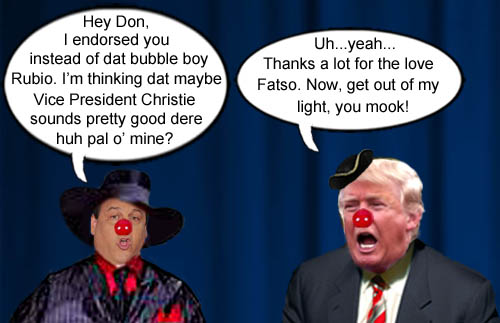 The Powah of TV

There is enormous power in television and visual media. All it takes is one appearance on tv or visual media, whether it’s a commercial, local news or even Youtube, and a normal everyday human being becomes a star; a person somehow better than everyone else just because he or she appeared in front of a camera at the right time and place. Yes – we humans are a strange bunch aren’t we.

Dale Byers, a struggling Cactus Corners actor, is finding that he has become irresistible to women following his appearance in a commercial for Cowboy Tex Bingo’s Used Auto Emporium.

“Well, I’m not sure what’s going on,” said Byers, scratching his scraggly brown hair. “I mean my acting coach, Tina Martin, says that I’m definitely a character actor, not a leading man. People say I’m a cross between Bob Saget and Conan O’Brien. Needless to say, I don’t get a lot of action. But since that commercial came on, I don’t mind saying, I’ve become quite the stud.”

The commercial features Cowboy Tex Bingo stating that he’s got the best deals in Cactus Corners and asks customers for testimonials. Byers steps up and says, “Tex got me a great deal on 1992 Ford Probe. Now I can take my girl out to the finer restaurants in town.” Byers then gives the camera an excited thumbs up.

Kit Dayne, an actress in Byers acting class said, “Like I never really noticed him before. He always did these dorky Bullwinkle impersonations in class. Like, who is Bullwinkle anyway? But like when he appeared in that commercial, it was like he was somebody. It’s like I want to attach myself to his rising star. I’ve been sitting next to him in class the last couple weeks wearing low neck sweaters and mini skirts. Like, I want to be the girl he takes out for dinner in his Probe.”

Sue Briscoe, who works with Byers at TGI Yummys said, “I can’t explain it, but since I saw him on that commercial, it’s like he’s a legitimate human being now. The fact he stood in front of a camera and recited stupid canned words make him seem larger than life. He’s actually met Cowboy Tex Bingo! He’s so much better than me and I want him bad.”

Dr. Cecil Griffin, a sociology professor at Cactus Corners Community College attempted to explain the phenomenon. “You see television represents power in the modern world and it’s no secret that women are attracted to powerful men. So when a man appears on TV, even though he may be a repulsive geek, he is perceived to have power. And like Al Pacino in Scarface said, once you get the power you get the women.”

Byers added excitedly, “I’ve got a commercial coming up next month for a hemorrhoid cream. Just think of the babes I’ll get after that airs.”

Well the South Carolina primaries were this past weekend and there was another expulsion from the Republican clown car in the farce that is Con-a-thon 2016. Despite getting help from his brother Dubya, George W. Bush, (or maybe because of it), Jeb Bush bowed out of the presidential race. His campaign was hemorrhaging money and he needed a spectacular finish to stay in the race. Unfortunately for Jeb and the Bush clan, he didn’t get it.

Thus, that means that the so called ‘establishment Republicans’ will have to get behind Marco Rubio, a.k.a. Marcobot 2016, or Ohio governor, John Kasich, who somehow is still in the race. What’s so funny here is the con that Donald Trump is not an ‘establishment Republican’. He represents everything the Republican stands for: greed, business and industry above all others, authoritarianism, christianity only, white Americans only. He is the epitome of the Holy Corporate Empire or the Corporate States of America that the Republican party would like the United State to become for all eternity. At the beginning of this stupid campaign season, we thought for sure Jeb Bush or another mainstreamer like Scott Walker would prevail and that Donald Trump was nothing more than a red herring; someone so insipid that he made the rest of the candidates look responsible by comparison. Apparently the Teabagger wing has taken over the Republican party totally and completely. The GOP is officially and blatantly bat shit insane. 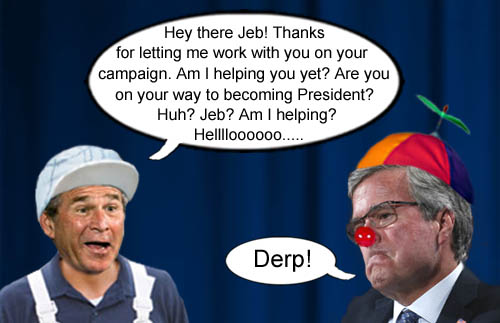 It appears that Jeb Bush will have time now to help his brother George W. Bush paint pictures in the bathtub.

The New Hampshire primaries were this past week and Bernie Sanders and Donald Trump were the big winners on the Democratic and Republican sides respectively. Of course, it also meant that the Republican clown car just got roomier in the continuing sham that is Con-a-thon 2016.

Carly ‘Ice Queen’ Fiorina,  New Jersey boss Chris Christie and some guy named Jim Gilmore decided to suspend their presidential campaigns this week. It was expected that Fiorina would go soon since she wasn’t even invited to participate in the last Republican debate. Her numbers have dropped since her support of a fraudulent video against Planned Parenthood last year. Chris Christie didn’t receive an expected bounce from his thrashing of Marco Rubio in last week’s debate, so he went back to Jersey. And as far as Jim Gilmore goes, he never really had a chance. He wasn’t even in our original photo-toon of the the Republican clown car (see above link). He’s continually polled at 0% so he finally smelled the coffee and said goodbye.

Who’ll be the next to go? We think the eternally sleepwalking Ben Carson will be the next outcast from the clown car since he doesn’t even know when to come on stage (Donald Trump didn’t either for that matter). Stay tuned folks! The six remaining Republican clowns are sure to provide more comedy in the coming weeks. 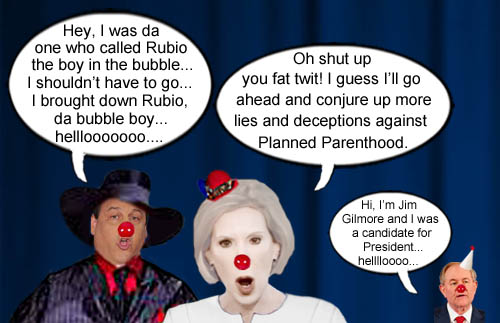 The big buzz this past weekend is the malfunctioning of Marco Rubio, a.k.a Marcobot 2016, during the latest Republican debate in the fiasco which is Con-a-thon 2016. We’ll just give you a link so you can view the carnage for yourself.

Of course the guy who skewered Rubio, Chris Christie, is not without his bouts of repetition as he belittled Rubio as the ‘boy in the bubble’ repeatedly. Stephen Colbert did a nice job pointing this out as well (at @the 4:00 minute mark). Yes folks; Con-a-thon 2016 is comic gold.

Both GOP candidates, Marco Rubio, a.k.a. Marcobot 2016, and Jersey boss, Chris Christie, have a fondness for repetition.