We’re taking another brief detour from our review of insane, Arizona GOP, Trumphumper candidates to talk about President Biden’s recent speech on the MAGA Republicans embracing ‘semi-fascism’. We thought it was mostly correct but ‘semi-fascism’? Really? Because the Republicans have been embracing full on fascism for some time now. And now they’ve been openly proving it every day since TFG took office in 2017 and then incited an insurrection on Jan. 6th 2021 because they didn’t win. In their typical whiny, cry-baby manner, Republicans wailed that Biden was being divisive while forgetting about how Trump vilified anyone who disagreed with him during his excruciating tenure as CEO/Dictator.

We also thought it was interesting that no major networks like ABC, NBC or CBS covered Biden’s important speech. This reminds us of other occasions like when Obama gave a speech about his executive order on immigration in December 2014 and nobody bothered to cover it. If the media were truly liberal like the conservative Republicans always claim, then all those networks would have covered Biden’s speech. Liberal Media My Ass!!! It’s just more hypocrisy and deception from the well funded propaganda machine operated by corporate conservative Republicans.

As a courtesy we’re reposting a photo-toon from December 15, 2015 post which depicts a checklist comparing the fascists of the NSDAP(Nazis) party of 1930’s Germany and the 21st century Republican party (or more appropriately, crime syndicate!). As you can see, there’s not much difference and hey, looky there . . . both had a well funded propaganda machine. So if it walks like a duck and quacks like a duck . . . We repeat folks; the Republicans are full on fascists and every TFG enabler running for office needs to be voted out of office or we will lose our democracy just like Germany lost theirs in the 1930s! 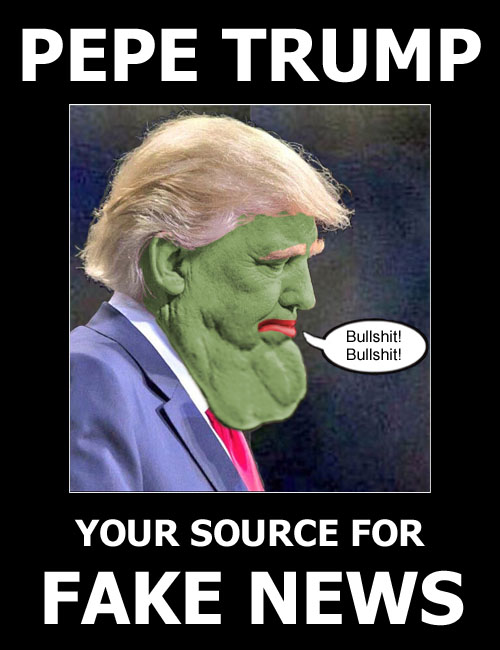 We’ve commented numerous times before here about the myth of the liberal media. But there’s nothing like stats and graphs that prove that the news media is actually very conservative. The web site Media Matters does an excellent job of keeping track of the lies and deceptions of the right wing media, especially Fox News, a.k.a. The Republican Propaganda Network. We usually don’t post graphics from other sites, but this one speaks volumes. It shows that on September 12, 2016, the major media outlets spent almost 13 total hours covering the non issue of Hillary Clinton’s health and only 51 minutes covering the real scandal of Donald Trump misusing funds in his so called Foundation. And of course, Fox News said nothing of Trump’s malfeasance.  This probably explains why Trump has gained on Hillary despite his vile, ignorant, inane commentary. It’s kind of like on the Simpsons, when smart, responsible Lisa gets bawled out for getting a 98% on a test instead of 100% and stupid, irresponsible Bart gets a trip to Itchy and Scratchy Land for getting a D on his math test. Yeah, we’re using a Simpsons analogy but so what. Donald Trump is the frigging GOP nominee for President! Con-a-thon 2016 cannot end soon enough! 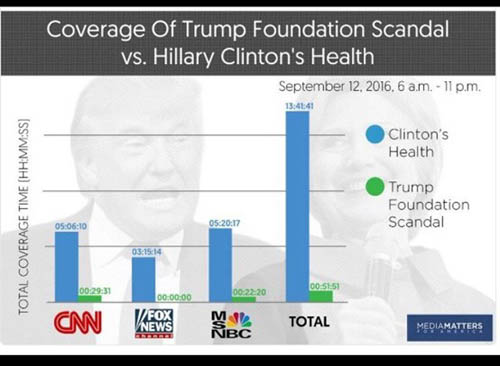 This graph from Media Matters shows conclusively the ‘fair and balanced’ news coverage of the major news networks. 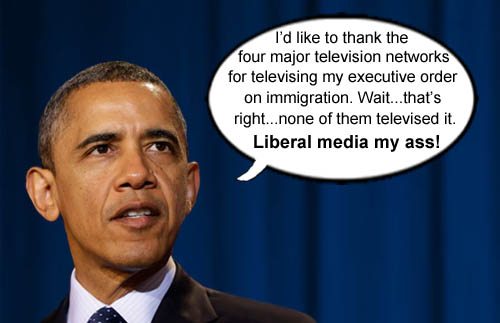 We absolutely love this video made by Vermont high school students. In it, they diligently and methodically point out how Fox News fails in fundamental journalism and ethical behavior. True, these kids may lack the polished delivery of a Bill O’Reilly or Sean Hannity, but they make their point. Kudos to these intrepid Vermont teenagers; A+++. As for Fox News; they get a big fat F in journalism and ethics. However, Fox does get an A in propaganda; Joseph Goebbels would be proud.