There’s been a lot of disturbing events happening in the world lately; the relentless pandemic, the brutal atrocities committed by Russians against the Ukrainians, the lack of progress on prosecuting the Capitol rioters and TFG, and the ongoing stupidity of the radical right-wing Republicans across the land. But one good thing happened this past week. Ketanji Brown Jackson was confirmed as the first African American woman Supreme Court Justice despite obvious racist ratf*ckery from GOP Senators during the confirmation hearings. Probably the most representative of the colossal inanity of the Republican efforts was retiring Senator Roy Blunt’s comments: “I think she’s certainly going to be confirmed. I think it’ll be a high point for the country to see her go on the court and take her unique perspective to the court.” So basically ol’ Roy Boy said she’s a great, qualified, historical candidate but he won’t vote for her. What an asshole! At least three GOPers – Romney, Murkowski and Collins – buried partisanship and voted for her. But then only Romney remained to applaud the new justice. Haters gonna hate!

Congratulations to Justice Jackson! We have no doubt you’ll be a successful jurist. Now we just need to get Asian American and Native American justices on the court.

The week is up on the sham FBI inquiry into Brett Kavanaugh’s alleged sexual assault on Christine Blasey Ford and it looks like the boozy, partisan judge will likely be confirmed given the preposterously limited scope of the investigation. There were many people who weren’t even questioned. We’re thinking that agents probably just sat around eating pizza and drinking beer; maybe even playing that popular drinking game The Devil’s Triangle.

There were several witnesses and people who claimed that Brett Kavanaugh lied under oath who were completely ignored by the probe. Why? Because this is a rush to justice by the hypocritical Republicans who can never admit they’re wrong on anything or anybody. They could easily nominate someone else who isn’t such a lightning rod, but no…that would be admitting defeat to a bunch of liberals. Kavanaugh will be a reliable cog in the conservative seizure of power in the nation.

So is this shameful Kavanaugh inquiry what we can expect from the Mueller FBI probe? Will Mueller finally come out and say ‘nothing to see here, folks’, after a year and a half of leading people on that there was malfeasance by Trump during the 2016 election? We’ve just about lost any shred of respect for supposedly venerable institutions of law, order and justice in this country. In America, there is shamefully only justice for the elite, well connected people with money, wealth and influence; namely Republicans in the vein of Brett Kavanaugh. The system is truly broken.

P.S. We recommend going to a chiropractor, Jeff Flake, since you seem to have a colossal problem with your spine. We knew your posturing for the FBI investigation was nothing but political theater. Way to stand up for women, you phony, feckless coward! We look forward to you leaving the Senate next year. 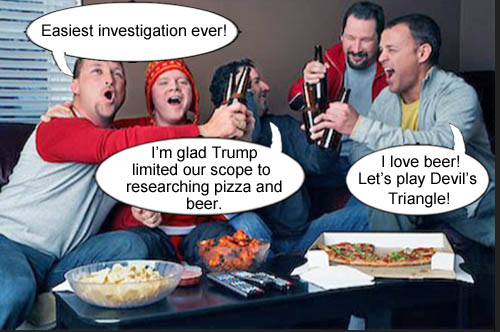