Trump’s Lapdog In The Dog House

In a stunning reversal of fortune, California Republican representative Devin ‘Fido’ Nunes, recused himself as chairman of the House Intelligence Committee’s investigation into the Trump administration’s ties with Russia during the 2016 election.

Nunes has received much criticism from Democrats and moderate Republicans for appearing to be CEO/Dictator Donald Trump’s lapdog. In the past couple of weeks, Fido has gone out of his way to make sure Donald Trump knew what was going on during the proceedings, which is a huge violation of House rules, federal law and ethics. But hey…when has that stopped the Republicans before. He is now under investigation for possibly disclosing classified information. Fido’s colleague, Rep. Ted Yoho, even said in defense of his friend, “Nunes is a man of high integrity and character”. Then he went on to say “You gotta keep in mind who he works for. He works for the president. He answers to the president.” No. No he doesn’t. Devin ‘Fido’ Nunes works for the constituents of the 22nd congressional district in California, not the President. He should put the people’s interest first since this is…you know…A DEMOCRACY.

Yep, Fido Nunes has been a good boy for his authoritarian master. We have no doubt he’ll be rewarded for his service like the good little lapdog he is. 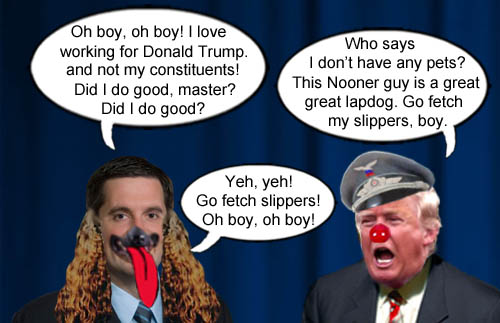 American CEO/Dictator Donald Trump, lavishes praise upon his lapdog, Devin ‘Fido’ Nunes, chairman of the House Intelligence Committee for breaking federal and ethical laws to keep him informed of anything bad the FBI is saying about him.