At the risk of flouting Godwin’s Law, we’ve noticed how far to the right the Republican party has traveled over the past twenty years; specifically in the years after Dubya left office and with the rise of the Teabaggers. Now that Donald Trump has started to spew forth truly hateful rhetoric in this farce of an election called Con-a-thon 2016, comparisons to the NSDAP party(Nazis) of 1930’s Germany are not only inevitable, but necessary. Make no mistake, it’s not just Trump who believes this filth. Every Republican candidate believes it as well, especially Rubio and Cruz, who both have said some vile, nasty unchristian things toward immigrants, foreigners, gays, women, and non-christians. Although every single high ranking Republican condemned Trump for his words, they would absolutely vote for him and support him in the general election. Yep, Trump is the heart and soul of the current Republican party and it’s pretty ugly.

What grinds our gears though, is when right wing blowhards violate Godwin’s by bloviating and showing their ignorance by comparing Obama to Hitler. This is not only laughable but blatantly incorrect. History shows that the leaders of the NSDAP party were overwhelmingly right wing conservatives not leftists (For an excellent, informative read try Richard Evans’ Third Reich trilogy: The Coming of the Third Reich; The Third Reich in Power; and The Third Reich at War). They had a well oiled propaganda machine that spewed forth hateful rhetoric about minorities and foreigners who would serve as convenient scapegoats for all national maladies. They were against gays, democratic socialists (they would have killed Obama), immigrants, and unions. Women were second class citizens who would only be useful to provide further citizens for the nation. They promoted eternal warfare and invoked nationalism to incite citizens to join the military. They pushed for a strong military and were very friendly to corporations which fueled the military industrial complex.  They would regularly stoke fear in the hearts of the citizenry by claiming the aforementioned scapegoats were going to ruin their nation. They would regularly stifle opposing viewpoints by announcing that anyone who disagreed were enemies of the state and should be eliminated. Hmmmm…notice any similarities? We think Americans must take notice, (Godwin’s Law be damned) and be very concerned about this 21st century neocon Republican party that, according to its propaganda, wants to ‘make America great again’ just as a certain right wing conservative fascist party wanted to make Germany great again in the 1930s. 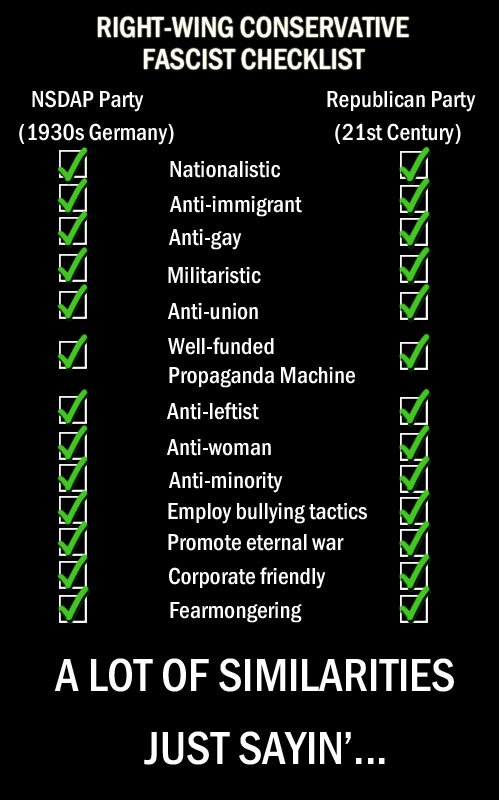 The modern Republican Party has some eerie and frightening similarities to a certain right wing conservative fascist party from 20th century Germany.