Greta Thunberg is making a big splash in the world and we couldn’t be more happy about this bold and courageous teen. She just recently scolded the world leaders to take climate change seriously or forever receive the wrath of the young people for their inaction. Kudos to her!!!

But she’s not the first advocate for climate change. Jimmy Carter actually talked the talk and walked the walk back in the 1970s but thanks to conservative patron saint Ronald Reagan, the nascent green energy movement was ridiculed and quashed before it even got started. Of course, many other intelligent people have stepped to the forefront over the last forty years pushing for alternative energy, only to be ignored and vilified by the powerful oil, gas and coal industries and their Republican (and some Democrats) lackeys in Congress.

A few posts ago we noted how so many modern-day conservatives were against conservation, thus making themselves colossal hypocrites. But it’s much more complex than that, of course. It’s the collective, monstrous egos of our planet’s most intelligent (allegedly) species, homo sapiens, that have done the most damage. When you put it in that context, each and every human being on the planet is responsible for the demise of life on Earth. We are all to blame and if we’re to rectify the problem, we need to all get on the same page. We all need a giant philosophical paradigm shift and that starts with the realization that unregulated capitalism is killing the planet and all the life on it.

Right now thousands of acres of rain forest are burning in South America. The vast Amazon is considered by many to be the ‘lungs of planet Earth’. Yet, it is believed many of these fires were set on purpose by humans; pro-business acolytes of Brazil’s fascist leader Jair Bolsonaro. This authoritarian right winger wants to expand logging, farming and mining industries at the expense of the health and welfare of one of the most vital and important ecosystems of planet Earth because he claims the rain forest belongs to Brazil and he can do whatever he wants.

But Bolsonaro is only doing what other third world countries do when they want to play the capitalistic game. They see the wealth of the exploitative, industrialized first world countries and they want some of that action. Or, he who has the most money wins the game. Of course, once you place living, breathing ecosystems and wildlife as a commodity to be bought and sold for profit, human’s greed and hubris take over with devastating results. There are numerous examples throughout history. Most scientists believe it was humans who killed off megafauna like the mammoth, giant sloth and the saber-tooth tiger. We’ve killed off the Tasmanian tiger, the dodo and the carrier pigeon in the last five hundred years. We almost drove the American buffalo to extinction in the 19th century. We’ve killed off over 60% of species since the 1970s. Greenland is melting at an alarming rate which places its wildlife in peril. Climate change is killing the Great Barrier Reef as is human pollution. A new study has indicated that since 1970, bird populations have fallen 29% or 3 billion fewer birds. All because we ‘intelligent’ humans greedily lust for an abstract commodity; monetary wealth.

But how and why did having money become the most important thing in our world? Because we’re humans, goddamn it! We’re superior creatures! What are we humans supposed to do with our time? Go hiking in the wilderness, relax and enjoy life? Boring!!! We must grow, grow, grow! Bigger, bigger, bigger! We’re taught from day one that we must utilize our superior brains every second of the day or else we’re failures. We can’t just sit around doing nothing. Or can we? If you ask any sane person what their idea of paradise is, they’ll usually respond some idyllic tropical island like Tahiti or some mountain retreat with little to no development and lots of nature or some small remote village where people live simply. So, why are we constantly destroying nature and building ugly concrete and steel structures and athletic stadiums which only last for twenty years? Because we can; as a monument to human ingenuity and greed.

But just because we can do something, doesn’t mean we should. Would it really be so bad to just not build a new multiplex shopping center? Would it be so bad to adopt a simpler lifestyle and enjoy nature and the great outdoors? Would it be so bad to tear down some of our ubiquitous, ugly strip malls and skyscrapers and plant urban forests and farms? Plant an urban garden where that stupid parking lot is. Have a nature reserve where that stupid golf course is. If we combine this with a global effort of birth control and contraception, we can get things under control again. We need fewer humans, not more humans on this planet. Humans, especially ones from industrial, consumptive nations are at the forefront of environmental devastation. We’ve created so much waste that we’re exporting it to third world countries with poor waste management systems. If third world countries become like first world countries, then our planet is truly doomed and we can all kiss our materialistic asses goodbye. We need to dial our greed back from 11. We need to curb our consumption and learn to be content with fewer material possessions and simpler lifestyles. This is the only planet we know of that supports life. We need to put the welfare of our planet before our own wealth, because without the planet, how can we enjoy the wealth? We need to stop worshipping the greedy, egotistical and avaricious and start respecting and caring for nature and our environment. Those paradises we yearn for are right under our feet; we just don’t recognize them because of all the concrete, asphalt and steel.

Carly Fiorina has ‘surged’ into second place in the sham that is Con-a-thon 2016. But she has caught a lot of flak recently and deservedly so for out and out lying about Planned Parenthood. This failed CEO and stone cold Ice Queen cooked up a video to support her lies. (Imagine that: a Republican making shit up!) But that’s par for the course for today’s compassionate, ‘pro-life’, conservative Republican. Tea Party Republicans in Congress right now are trying to defund Planned Parenthood stating that it would save taxpayers money on providing abortion services even though according to facts (something Republicans hate and ignore), only 3% of the money afforded to Planned Parenthood goes to abortion services. Here’s another article that points out the Republicans incoherence. Most of Planned Parenthood services go to STD prevention, cancer screening and providing contraception consultation. Make no mistake, the right wing, evangelical christians will do anything including the distinctly unchristian lying, cheating and deceiving to make sure a woman has no choice but to have her baby even if it might possibly mean the woman’s life ends. ‘Pro-life’ indeed!

GOP Presidential candidate and stone cold Ice Queen, Carly Fiorina, creates a new fib of gigantic proportions in hopes of eliminating Planned Parenthood and winning the votes of the right wing wackos in charge of the Republican party.

Get Back In The Kitchen!

It’s especially interesting that Santorum is leading again given his archaic views on not only women, but topics like immigration, education, defense, evolution and life in general. We already knew about his anti-choice and anti-contraception stances; all out of the dark ages. But recently he said that women aren’t equipped for combat either and even has questioned the value of women in the workplace. Of course, these views are in line with the conservative agenda, and in particular conservative catholics. How can contraception be a sin when there are now 7 billion people on the planet?!!! We think that since Newt Gingrich has proposed a moon base, maybe Rick Santorum should propose building a time machine and travel back to the period in history that is more appropriate for his way of thinking: the days when neanderthal man roamed the earth, which according to Santorum’s creationist dogma was only about six thousand years ago. 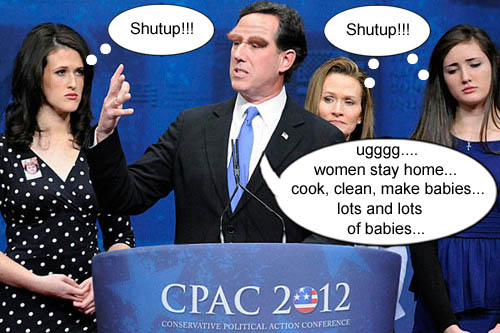