The actions of the five and a half christian nationalists on the Supreme Court have shocked and disturbed not just democratic minded people in this country, but all over the world. Their recent rulings on abortion, prayer in public schools and restrictions on environmental regulations are regressing American culture back to the 19th century. In the abortion decision, Samuel Alito even cited precedence from a 17th century misogynistic jurist who believed that women were witches and property. The sanctimonious justices have also indicated that they may possibly turn back other things like LGBTQ rights, interracial marriage, birth control and even having fair and democratic elections. These authoritarian zealots want to turn America into a christian theocracy.

We’ve already seen how repressive islamic theocracies are. Take the Taliban in Afghanistan. Women are treated like they were in ancient times; like second class citizens. Basic human rights are pretty much limited to straight islamic men. The clerics run the country with an iron fist. Do we really want to turn our nation into a christian version of Afghanistan? Do we really want the American Taliban on the Supreme Court to dictate every aspect of our private lives? We thought the right wing wanted government out of our lives? Recent polls have indicated that Americans have little confidence in the current Supreme Court after their latest decisions.

Let’s face it, folks – the right wing justices are clowns. The Roberts court is a complete and total joke. Brett Kavanaugh will forever be remembered for his bold proclamation of liking beer, his unhinged rant against Clinton and the Democrats and his tearful, whiney defense of his dubious actions with Christine Blasey-Ford. The handmaiden justice Amy Coney Barrett’s confirmation was jammed through despite it being an election year. Neil Gorsuch’s mother wreaked havoc on the EPA and now it’s his turn. Kavanaugh and Gorsuch committed perjury during their confirmation hearings when they stated that Roe was settled precedent. Clarence Thomas should be dismissed from the bench for his obstruction in the investigation of the Jan. 6th hearings. Why’s that? Because his wife Ginni was involved in trying to overthrow the election. And Samuel Alito should be disbarred for even thinking about quoting a 17th century jurist who believed in witches. And what’s a common thread amongst these jokers beside their holier-than-thou christianity? They’re all anti-science. They’re all skeptical of climate change, green energy, vaccines, gender science and evolution because it counters their close-minded, archaic views of the world.

The Supreme Court should not be political, but if these christian nationalists persist then the constitution much be changed so that the justices should be elected by popular vote. Therefore they should not have life time appointments – maybe just a six year term like Senators. The Democrats need to step up to the plate and check these zealot’s power while they still have some power. Maybe they need to channel their inner FDR and stack the court. The freedom loving American people will not accept an American version of the Taliban ruling over every aspect of their personal lives. We don’t want America to be a Holy Corporate Empire. This is the 21st century. Like we’ve said before many times, Americans need to connect to a 21st century database, not a 1st century database.

We received this week for the umpty-ninth time of the Trump administration a glaring colossal reason why America’s Impeached CEO/Dictator Donald Trump should not be re-elected. In a televised speech to the nation, Trumpty Dumpty in typical Trumpian fashion failed to admit any fault in his response to the coronavirus and instead of calming the nerves of people worldwide, prompted more panic as stock markets again plunged Thursday morning. That’s almost an 8,000 point drop since mid February, folks; basically erasing any stock market gains since 2017. And remember: the ‘strength’ of the stock market was supposedly Trump’s mightiest accomplishment. Ooops!

A hallmark of the Trump presidency is that he constantly boasts how everybody loves him, what a stable genius he is and that ‘some people’ proclaim that he’s the greatest president in history. This monstrous narcissism was on display last week at a press conference at the CDC where our orange-haired megalomaniac blathered on about how a relative of his was a ‘super-genius’ and how scientists were coming up and telling him how smart he was and that he’s got ‘a natural ability’. Scientist, doctors and engineers around the world collectively vomited at this point. Trump’s vanity and ego truly know no bounds!

We’ve noted Trump’s resemblance to perpetual cartoon brat back in 2016 when we did a photo-toon explaining the 2016 election, Simpsons style with Hillary Clinton as Lisa and Trump as Bart. Trump’s constant boasting over the last three years reminds us of a classic episode of the Simpsons in Season 4 (Lisa’s First Word) when a little two year old Bart paraded around the house banging a pot proclaiming to all within earshot “I am so great! I am so great! Everybody loves me! I am so great!” Or here’s a hilarious 10 minute loop of Bart’s proclamation. (We’ve also embedded the vids below.) Gee, sound familiar? Yes, our Impeached CEO/Dictator and petulant man child Donald Trump certainly does bear a striking resemblance to rotten little imp Bart Simpson. Cowabunga, dude! 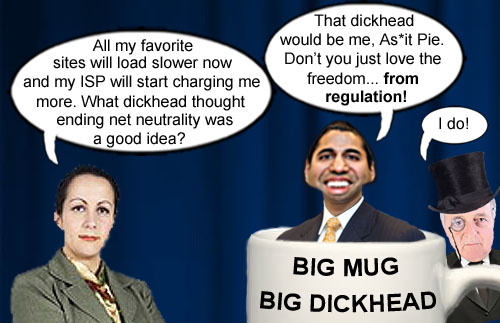