We knew before the impeachment process began that the Republicans would acquit America’s CEO/Dictator Donald Trump of any wrongdoing (with Spiff Romney being the lone Republican to vote to convict – note: we’ve given Romney a lot of crap over the years but he got it right this time; Good job!) but it doesn’t make it any easier to take it. To their credit, the Democrats, led by Adam Schiff, did an exceptional job of proving Trump’s guilt in the quid pro quo bullying of Ukraine for dirt on Joe Biden in exchange for foreign aid. Which makes it infuriating to watch the self-proclaimed ‘morally superior’ GOP make a complete sham out of the proceedings. The charlatans didn’t even want witnesses called! Polls indicated that 75 percent of Americans thought witnesses should be called. What’s a trial without witnesses! Well, apparently it’s completely normal in Trumpland, where the Kansas City Chiefs play their games in Kansas City, Kansas instead of Kansas City, Missouri and Donald Trump is a master meteorologist.

The fact is that Republicans even admitted that Trump is guilty and they’re still voting to acquit him. Lamar Alexander said Trump did the quid pro quo but it’s not impeachable. Linda Murkowski said pretty much the same thing, saying what Trump did was “shameful and wrong”, but that she couldn’t vote to convict. So basically, in the warped mind of a conservative, lying about sex is impeachable and asking for foreign aid on a political rival is a-okay. Just put little baby Donald in time-out and he won’t do it again. But Trump is already reported plotting revenge on all the people who wronged him.

Chief Justice John Roberts did nothing to dispel his perception of being a partisan hack. Remember Roberts fully approved of the Citizens United verdict that gave unlimited power to corporate America to contribute to campaigns. And despite his voting for Obamacare, we knew he was still a true conservative Republican. He could have intervened and insisted on witnesses, but he didn’t. He seemingly has no qualms on presiding over a travesty of justice. Great example there, Chief Justice Roberts!

The GOP keeps whining that the Democrats are trying for a coup, which is a complete projection of what the Republicans have done since the 2016 election which they stole thanks to Russian election interference and suspension of the rule of law for selecting a Supreme Court justice (Merrick Garland) in the Senate by Moscow Mitch McConnell, a.k.a. Turtle Boy. Even Karl Rove admitted during Dubya’s fiasco of a presidency that he was determined to have the same kind of Republican hegemony that existed between 1865 and 1932 when Mark Hanna was the chief political operative and only two Democrats served as president during that span (Grover Cleveland – two non-consecutive terms, 1885-1889, 1893-1897; Woodrow Wilson 1913-1921). Now with thisclusterf*ck of a trial, the Republicans have pretty much deemed that Trump can do whatever the hell he wants to do and not suffer any kind of consequences and there’s nothing anyone can do about it. This despite the fact that since 1988, Republicans have only won the popular vote in presidential elections once. We agree with the many people who are saying that just like the 2016 election, the megalomaniac Trump will never accept the results of the 2020 election if he loses and America will have yet another constitutional crisis involving Trump and the Republicans.

So, in true right wing, conservative Republican, authoritarian fashion, life in the United States can now be summed up by the mantra, Trump über alles. Enjoy your fascism, America – oh… and Heil Trump!

The news is out that the Democrats are pushing for Robert Mueller to testify before Congress and the Trump administration and Republicans are not happy about that. Mitch ‘Turtle Boy’ McConnell tried using Jedi mind tricks in the Senate by repeatedly uttering “Case closed….Case closed.” And of course, America’s CEO/Dictator and delusional man child, Donald Trump, continued his pathological prevaricating on Twitter and on his right wing echo chamber Fox News, a.k.a. the Republican Propaganda Network. But there were some other disturbing developments on the international front that show that the Republicans might take an insane, catastrophic step in order to protect Trump from the fallout of Mueller testifying.

The United States has sent warships to the Gulf of Hormuz in response to ‘troubling’ actions by Iranians. National Security Advisor, war hawk and failed walrus impersonator John Bolton, has been beating the drums for war with Iran since the days of the Iraq War clusterf*ck, which Bolton still thinks was the right call. Now the delusional Bolton thinks starting another war in the Middle East would be another smashing idea and we’re sure the defense corporations are champing at the bit for a new avenue for profit. Therefore, Bolton and Trump are trying to create a Gulf of Tonkin incident so they can start a war with Iran.

Secretary of State Mike Pompeo also seems to be supporting the idea of war with Iran but for a different reason. Pompeo is one of those looniest of loony evangelical christians called a rapturist. In the warped mind of these nutbags, the end times are a-coming which means that all good christians will be slurped up to heaven while the rest of us ‘heathens’ will be left to toil on Earth. One of the pre-cursors for the end times, according to ‘biblical scripture’, is that Jerusalem is recognized as the capital of Israel, which Donald Trump did last year. Now, according to the end times mythology, a great war will occur and Jesus Christ will come again which will facilitate the ‘rapture’. Many prominent Republicans are rapturists including Pompeo, VP Puritan Mike Pence, former Teabagger darling Sarah ‘Ubetcha’ Palin, former Attorney Confederate General Jefferson Beauregard Sessions III, housing secretary Ben ‘Mr. Sandman’ Carson and energy secretary and brain fart expert Rick Perry. So, with a normal, logical, reasonable Secretary of State, war is usually and wisely avoided. But with this evangelical loon, conditions are being forced that would result in a catastrophic conflict in the Middle East. This would mean that biblical prophecy would be ‘proven’ correct and all the ‘good people’ (christians) will get their just desserts in heaven and all the bad people (the rest of us) will suffer in lakes of fire here on Earth.

Of course, these wack jobs fail to consider that the people who wrote the bible lived two thousand years ago and didn’t know jack about the Earth or the universe. We’ve mentioned before that religious people connect to a tiny bronze age database while scientific people connect to a colossal, 21st century database chock full of knowledge. We’ve gained so much knowledge about everything in the last four hundred years. To ignore science, scientific inquiry and scientific methods is sheer lunacy and any person advocating radical ideology based on two thousand year old babble shouldn’t be allowed anywhere near the corridors of power in this country. We guarantee to all those rapture loonies that unless you’re vaporized by a nuclear blast you’ll still be here left to toil on the Earth with the rest of us.

The exodus of personnel from the disaster that is the Trump White House continues. Rumor has it that NSA advisor, H.R. McMaster, one of the few competent people in the Trump administration, is heading for the hills. The scuttlebutt is that everyone’s favorite mustachioed, hate filled, crusty curmudgeon, former United Nations Ambassador during the Bush Administration, John Bolton, is being considered for the NSA position. Bolton is an unabashed warmonger and would be disastrous not only for the country but for the world.

Back during Dubya’s days in the White House, we had a regular feature here at the Bucket called Probing Inquiries. Bolton definitely had an image problem (and still does) and desperately needed an image makeover so he’d appeal to a wider swath of Americans. How’d it turn out? You be the judge.

The new controversial U.S. ambassador to the United Nations, John Bolton, recently hired a crew to completely makeover his image from a grizzled curmudgeon to a softer, more amiable statesman. Leader of the makeover team, world renowned fashion consultant Fantasticus, who is also responsible for the stylish makeovers of Katie Couric, Condoleezza Rice and Prince Charles’ polo horse Skippy, describes the different looks considered in the makeover odyssey. The final result will surely make John Bolton the most loveable U.S. Ambassador to the United Nations ever! 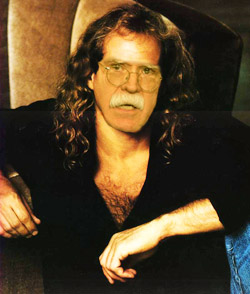 The obvious first choice was to make John Bolton look like the other famous Bolton in America, singer Michael Bolton. We thought the long locks, smoldering eyes and sex appeal of Michael would transfer well to John. We were wrong. Next! 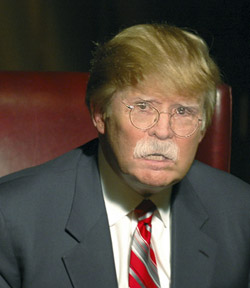 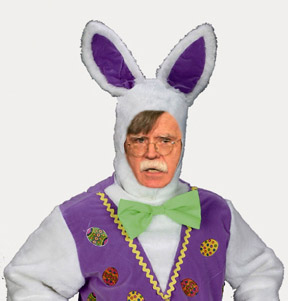 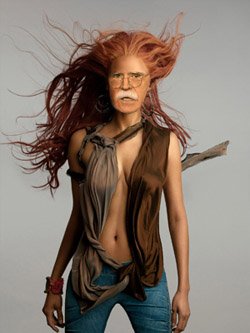 The makeover was going downhill quicker than Bill O’Reilly’s ‘War on Christmas’, so I called in makeover diva, Tyra Banks, as a consultant. Tyra is known for her ‘fierce’ makeovers, but this look just creeped everyone out. Next! Hurry! 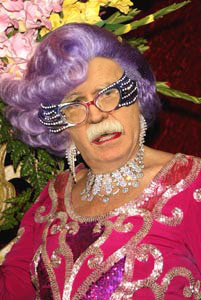 WINNER! We fired Tyra immediately, but she was on the right track. Who’s more non-threatening in a masculine-feminine way than Dame Edna. This look will put his fellow ambassadors at ease and bring laughter and love to the entire United Nations.