Wrapped In The Flag; Carrying A Cross

Let’s face it, folks; the year 2020 sucks! The events of the last two weeks (not to mention the last three years) have profoundly disturbed and shook us, which is why we had to recently post some old photo-toons so we could wrap our heads about the ugliness of it all. First, there was the repugnant murder of an unarmed black civilian, George Floyd, by Minneapolis police officers. If you’re any kind of sentient, sane, compassionate, sympathetic human being, the video of the police officer with his knee on Mr. Floyd’s neck was nauseating to watch. Predictably and justifiably, protests broke out, not only in cities across America but in other countries around the world. Unfortunately, our Impeached CEO/Dictator and petulant man child Donald Trump, decided to play authoritarian strongman and chose to throw gasoline on the fire by egging police and military forces to take harsh actions against any and all protesters. He called for governors in each state to ‘dominate’. It’s kind of ironic that just a couple weeks ago, when the MÆGAMorons protested not being able to get manicures because of the coronavirus shutdown, Trump was all for protesters to liberate their states.

The examples of brutality have become legion in the past week alone. Certainly, the most visible is the one Trump and his droopy-faced hound dog Attorney General William Barr instigated by scheduling a photo-op and sending tear gas into a crowd so Trump could waltz across the street from his White House bunker to St. John’s church so he could hold a bible upside down and proclaim that he’s doing God’s work. Really convincing, eh? Even religious leaders criticized Trump for his using the bible as a prop. Of course, Trump and his fascist gaslighters have denied using tear gas despite the evidence. Also notable at this incident, were several unidentified armored officers. Could these secretive security forces possibly be Trump’s version of brownshirts showing up to enforce the will of dear Leader Trump? It certainly seems like it.

We’ve commented many times about fascism and fascists, especially the prediction credited to Sinclair Lewis that when it comes to America, it will be wrapped in the flag and carrying a cross. We even posted, before Trump was even elected, a handy dandy checklist comparing the NSDAP Party of 1930s Germany with 21st century Republicans. You know why? We’ve read a lot about the subject and when we see similarities we mention them. Like in Naomi Klein’s excellent book, The Shock Doctrine, Trump is following the playbook of authoritarian leaders who shock their own citizens into accepting their ideology and economic world view. The GOP has been planning this for the past twenty years. We even posted about it after Trump’s sham of an impeachment trial; it’s Trump über alles. Trump has been shocking us on a daily basis with a Twitter blitzkrieg for the last three years to crush our will and depress us. And what are the Republicans in Congress doing? They’re letting him get away with it because this is their plan. They’re goosestepping right behind him, pushing through laws that favor corporations and plutocrats while destroying the middle class as Trumpty Dumpty and Fox News, a.k.a. the Republican propaganda network, distract and gaslight us to death. Could these latest acts of authoritarianism and police brutality be the breaking point? We certainly hope so. We must continue to protest this clusterf*ck of a presidency and stand up against authoritarian rule. Fascism is unacceptable in America. Democracy and rule of law are what this country is all about. Freedom of speech is one of our most cherished freedoms. This is a country, by the people for the people; not by the corporation for the corporation. We the people must vote Trump and his fascist cohorts out of office in November!

While America’s CEO/Dictator, Donald Trump, continues to receive bad news about the Mueller investigation, he’s basically swept the murder of journalist Jamal Khashoggi under the carpet instead of confronting his new best friend, authoritarian Saudi Crown Prince, Mohammed bin Salman. The Senate is currently trying to put together a bipartisan bill to force sanctions on Saudi Arabia. Will they be able to do it? Pardon our skepticism but considering their past performance these past two years, probably not.

Meanwhile, Melania Trump has received some ‘attention’ concerning her unusual red xmas trees decorating the White House. We think that maybe its an homage to the Donald’s new friendship with the Saudis…you know…blood red xmas trees with bone saw ornaments. Like Melania says, “Be best, darlink.” 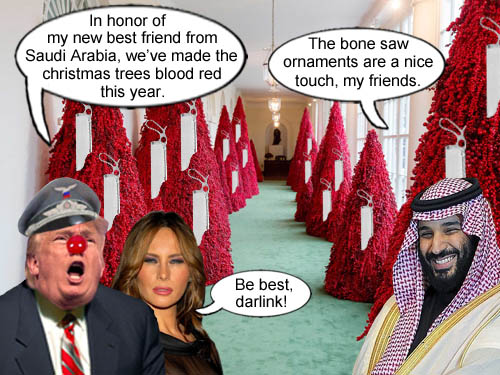 The Trumps reveal their artistic blood red christmas trees with innovative bone saw ornaments in honor of their authoritarian friends in Saudi Arabia.