I don’t think we can describe the first Presidential debate debacle (or should we say debatacle) better than CNN’s Dana Bash when she called it a ‘shitshow’. The reaction from world governments was pretty damning as well. The Guardian called is ‘a national humiliation’ while an Israeli TV anchor said, “Condolences to America. . . it’s harder to sink lower than this.’

And who made it a shitshow? Why none other than America’s Impeached CEO/Dictator and petulant man child little Donny Trump. Good fricking grief! What an asshole he was! Joe Biden couldn’t get a word in edge wise because our megalomaniac dear Leader kept interrupting him like a goddamn baby. At least Joe Biden told him to shut up a couple of times. Normally, we’d not approve of that kind of behavior, but look who Uncle Joe was dealing with. Sometimes you have to put the crybaby in a timeout and let him think about what a little prick he’s being.

But what was really alarming was that Fox Propaganda ‘journalist’ Chris Wallace lobbed a softball question for Trump about denouncing white nationalists and the bellicose, orange haired prevaricator botched that, saying instead that Proud Boys should ‘stand back and stand by’. That certainly sounds like ‘get ready to rumble’ to us. Of course, all the GOP sycophants in Congress and the media have been in full gaslighting mode trying to tell the American people that they didn’t hear what they heard. Trump ass-kisser extraordinaire Sean Hannity was even gloating that Trump was a new style of mighty warrior. Holy Shit!!! What an addleheaded asshole!!!

The only thing the debate proved was that Donald Trump is a goddamned crybaby and shouldn’t be allowed to be President. But then again we’ve known that ever since he first announced his was running for office. Dealing with Trump is like playing chess with a pigeon, with Trump playing the part of the bird. The pigeon Trump will knock over all the pieces and poop on the board and claim complete and total victory, which is what Trump did on Tuesday night. We have no doubt he will probably try to do the same thing on November 3rd. 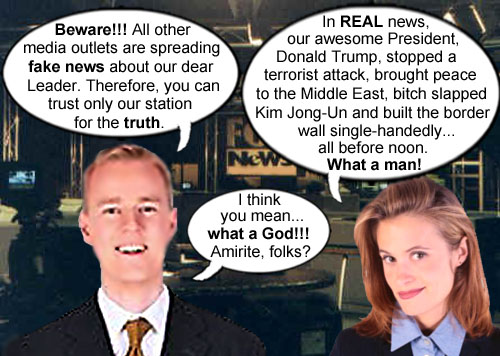 It sure was a bad week for Matt Lauer; one where he may reconsider his career as a ‘journalist’. He was roundly panned for his moderating skills at the recent Commander-in-Chief forum, where he interviewed both Democrat Hillary Clinton and Republican Donald Trump. He was noted for repeatedly interrupting Hillary Clinton and letting Donald Trump get away with his lies and misconceptions. We half expected him to curl up on the Donald’s lap and ask him the ultimate softball question: Do you wear boxers or briefs? The general consensus was that he should stick to doing fluff interviews with breezy celebrities on his lame-ass morning show. 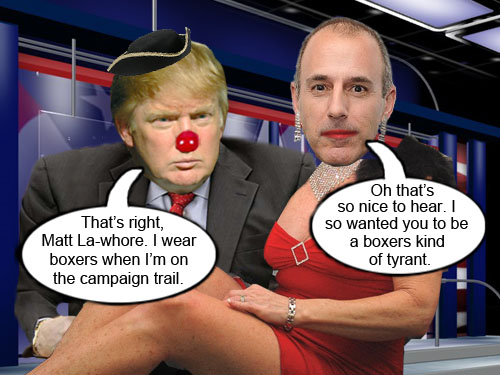 Crack journalist Matt Lauer grills GOP nominee mercilessly on the most vital issue of our times: boxers or briefs.

Now that we’ve concluded our 2004 RNC retrospective, we’ll be presenting some highlights from the 2012 Republican National Convention in the sham that is Con-a-thon 2012.

It’s nice to see that Fox News, a.k.a. the Republican Propaganda Network, had so many …eh hem…journalists to cover the proceedings. Edward R. Murrow would sure be proud at the state of modern journalism wouldn’t he. 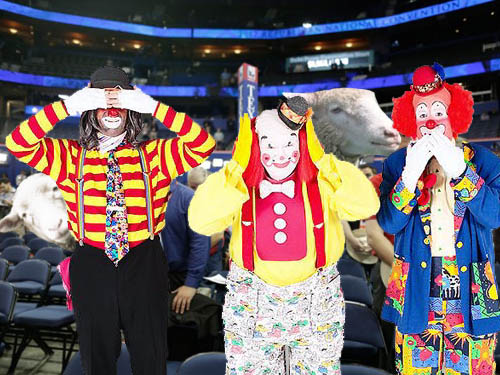 Fox News, a.k.a. the Republican Propaganda Network, sent several reporters to the Republican National Convention to cover Republican affairs with their special brand of journalistic integrity.