It’s time to get back to our final review of Arizona GOP whack-a-doodle candidates. We’ve already mentioned fluff-brained gubernatorial candidate Kari Lake and plutocrat butt kisser senatorial candidate Blake Masters. We focus in this post on perhaps the most insidious and dangerous of the Trumphumpers, Mark Finchem, who is running for Secretary of State. In Arizona, the Secretary of State is second in command since there is no Lieutenant Governor. The Secretary of State is also in charge of certifying election results and keeping records of campaign finances. This is why Finchem is dangerous – he is an election denier and has openly stated that he would have overturned the 2020 election in favor of TFG despite there being absolutely no evidence of voter fraud. He’s also stated that if he loses the upcoming election he will not concede, just like Trump.

But first, who is Mark Finchem? The way he dresses and acts, you’d think he’s a native Arizonan. But he was born and Michigan and moved to AZ and adopted the garb and persona of a rough and ready, independent Arizonan. Basically, he’s a poser. But the conservative rubes eat it up which is why he was elected as a state representative for Legislative District 11 which represents about 225,000 Arizonans in Pinal and Pima counties which covers the northwestern parts of the Tucson metropolitan area up to Casa Grande and Maricopa. Finchem’s been married four times, so he’s got TFG beat there. Other Arizona Republicans have called Finchem a “political gadfly” and “one of the dumbest” members of the state legislature.

Why is Finchem so dangerous? Wow, where do we start? First of all, Finchem is a QAnon true believer and a 9/11 truther. He attended the Capitol riots on January 6th which should disqualify him completely from running for office. But he stated that he didn’t go inside and was just a witness which apparently makes everything square in his fevered mind. He is an Oath Keeper, which is a far right wing, anti-government, extremist militia group and has kept ‘treason watchlists’. He’s a supporter of TFG’s Big Lie and said fraud was rampant in Arizona despite several audits saying there was no voter fraud. We repeat: NO VOTER FRAUD!!! His opponent in the Sec. of State race Democrat and native Arizonan Adrian Fontes is a former Maricopa County Recorder and lost his re-election race in 2020. We would think if there was fraud Fontes would arranged for his own re-election but that didn’t happen. Even his Republican opponent in the Recorder race Stephen Richer said there was no fraud. But does that matter to these MAGA Morons? Not one bit. They’ve drank the Trump kool-aid and plan to use every one of his vile obstruction tactics including not conceding and contesting any results they don’t like.

Finchem debated Fontes this past week and according to most reviews, Fontes owned the Republican screwball. Finchem acted unhinged for most the thirty minutes doubling down on his debunked conspiracy theories while Fontes remained calm, cool and collected answering in even measured responses. Among his most egregious assertions, Finchem cited the discredited “2000 Mules” movie, which made unproven claims about widespread ballot harvesting in the 2020 election. The two sparred on many issues including mail-in ballots which Finchem wants to eliminate. Finchem is also in favor of letting the state legislature select the Senator instead of letting the people. Apparently, Finchem has conveniently forgotten the Seventeenth Amendment which guarantees the citizens the direct vote of Senators. Like with the mail-in ballots, Fontes pressed Finchem to admit he favors taking away the vote from the people, but the loony wingnut kept hemming and hawing and dodging the question because he knows that his position is colossally undemocratic and would expose him for the fascist he is.

The bottom line is this, folks: Mark Finchem is a bat shit insane, QAnon, Oath Keeper, fascist nutcase and is an absolute danger to Democracy. If he is elected Secretary of State, he will guarantee that only Republicans will win key offices in upcoming elections which is not only undemocratic but out and out fascism. We Arizonans need to make sure to vote him out this November 8th or we will never have fair elections in this state again and it might start an unfortunate trend that goes nationwide.

Update 9/26/22: Here are a couple more links to stories about Finchem.

Finchem Falsely Claims That Then-Vice President Mike Pence “seized power” from President Donald Trump and undertook “a coup” when he called on federal agencies to stop the Jan. 6 Capitol riot. 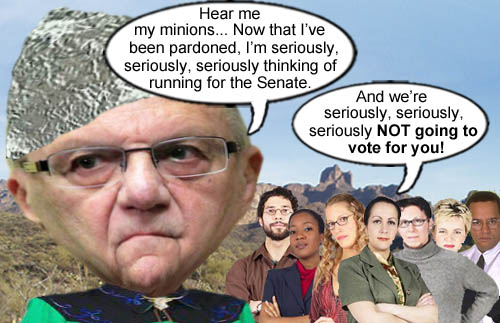 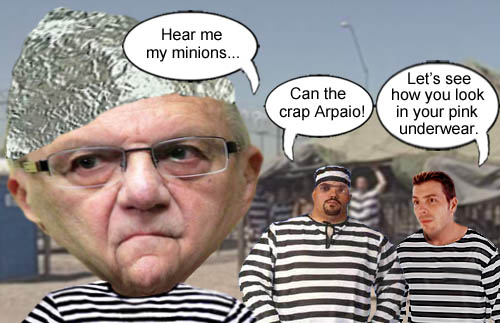 The fallout form Arizona’s election fiasco on March 22nd is still unfolding. Maricopa County Recorder, Helen Purcell, was widely and deservedly vilified for her initial response, where she actually blamed the voters.  Purcell backtracked a few days later and took full responsibility, but the damage was done. Purcell, explained that the number of polling places was cut from 200 to 60(almost 70% reduction… let us repeat that…70 FRIGGING PERCENT REDUCTION!!!) in order to save money. But the truth is that conservative Republicans have a stranglehold on this state and since they’ve gerrymandered the state legislature districts so drastically, there is virtually no way to get them out of power. They’ve clearly passed legislation and cut election funding in order to suppress voters. The office of Maricopa County Recorder is supposed to be a non-partisan position but Ms. Purcell is a staunch Republican and she has been in office since 1988. In several years, she’s run unopposed which has led to the same complacency and smug demagoguery that Joe ‘Just Call Me God’ Arpaio possesses. Let’s just say she’s a good soldier for Republican causes.

Now the federal government is investigating the voter suppression and even Hillary Clinton, Bernie Sanders and the DNC is suing Maricopa County for voting rights violations. Will Maricopa County increase the number of polling places for the elections later on this year? We’re not holding our breath here. Arizona Republicans want to remain in power come Trump or the apocalypse. Given their anti-federal government viewpoint, this will only strengthen their resolve. You see, austerity democracy works great…for corporate America backed conservative Republicans. The game is definitely rigged here in Arizona for Republicans and they’re not going to change anything any time soon.

Getting back to Ms. Purcell…we do think that she should get on the back of Sheriff Joe’s horse and ride off into the sunset. We’d expect this kind of voting rights violation in a banana republic. But this latest debacle is inexcusable in America and especially in our home state of Arizona. Ms. Purcell needs to resign! 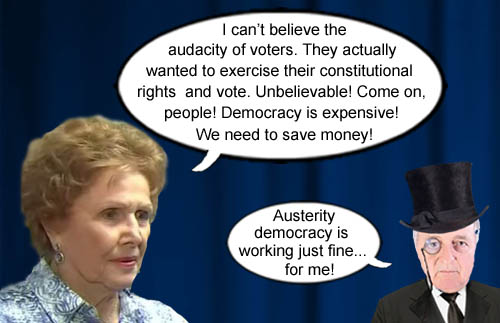 Arizona Maricopa County Recorder, Helen Purcell, proclaims that democracy is expensive and voters need to quit whining, much to the delight of plutocrats everywhere.