You can just about set your watch by it these days: a conservative Republican politician in Arizona acts like an ass on the national and world stage. The long list includes former state senator Russell “I’m not a Nazi” Pearce, sheriff Joe “Just call me God” Arpaio, former congressman J.D. “Rush Jr.” Hayworth, Senator John “I gave the world Sarah Palin” McCain, former Governor Fife “I like cooking food and books” Symington, the king of crazy, former Governor Evan “blacks love being called pickaninnies” Meacham and the Republican slanted state legislature and its infamous “anti-immigration” bill SB 1070. Last week Arizona Governor Jan “Skeletor” Brewer greeted President Obama on the tarmac and had a testy exchange of words over her treatment of him in her new book and ended up wagging her bony forefinger at the President as if he were a school child and not the leader of this country. This from a woman who gave this unforgettably embarassing performance in the 2010 gubernatorial debates. Incredibly and even more embarrassingly, she won the election! Yep, there’s a lot of scary conservatives living here in Arizona. Getting back to the “showdown”, if former governor and current United States Secretary of Homeland Security Janet Napolitano would have greeted Dubya that way, Republicans would have been calling for her head on a platter.

At least the Guvnuh’s new book, “Scorpions for Breakfast: My Fight Against Special Interests, Liberal Media, and Cynical Politicos to Secure America’s Border” (yep, My Fight or Mein Kampf in German), got a fantastic boost in sales from her “showdown with Obama”. Or maybe, that’s why she did it in the first place. Hmmmm… Anyway, we here at the Bucket think that the desert heat may have cooked the Guvnuh’s brain liked a baked potato, especially with that tin foil hat she likes to wear. 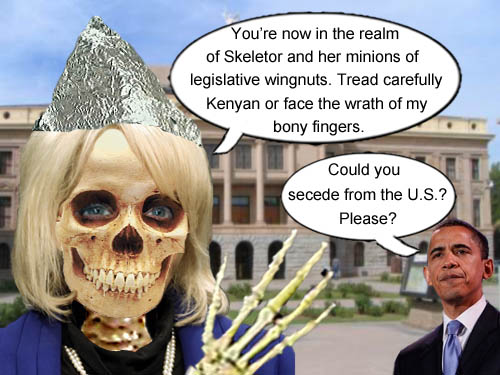 Arizona Governor Jan "Skeletor" Brewer warns President Obama that he has entered the Kingdom o' Wingnuts and that he had better beware.