The Supreme Court decided by a 5-3 decision Monday to disallow the majority of Arizona’s unenforceable SB1070 anti-immigration law, written by former Arizona state senator, Russell “I’m not a Nazi” Pearce, and signed into law by Governor Jan “Skeletor” Brewer back into 2010. But what we found disturbing was that the heart of the law, the stopping of ‘suspected’ illegal immigrants, was upheld. This was the most controversial part of the law because it doesn’t define what an illegal immigrant looks like. This doesn’t matter to the proponents of this law because in their mind an illegal immigrant is Hispanic. The enforcement of this law will open up the state to lawsuit after lawsuit with justifiable complaints of racial profiling. We can only guess as to what kind of suggestions the fertile mind of ‘patriot’ Russell Pearce will come up with for further enforcement of this law. 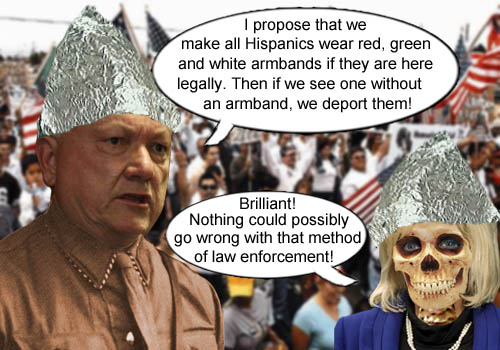