The Chariot Of The Gods

It’s time to look at another one of the jesters in the GOP clown car that is Con-a-thon 2012. Good ol’ Uncle Newtie Gingrich, the GOP flavor of the month not too long ago, sure has stuck his foot in it again. He recently suggested in a speech on the campaign trail that those who ride the subway in New York are elitist. That’s right. You’re always hearing about the rich and powerful arriving at their $10,000 dollar a plate dinners taking the Blue Line in from their Central Park penthouse apartments. It will be interesting to see all the tuxedo and gown clad stars at the upcoming Oscar festivities, getting out of their subway cars on the Metro Red Line and hoofing it over to the Kodak Theatre. Seriously, if anyone is still planning on voting for Gingrich, they should probably seek psychiatric help first. 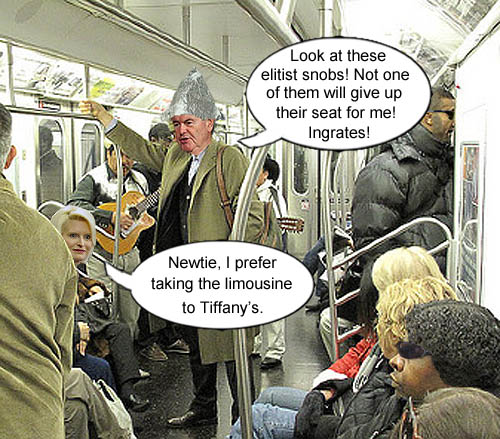 GOP candidate Newt Gingrich and his wife Callista splurge and take a ride on the 'Chariot of the Gods' to their favorite store.