If you’ve had doubt about where the Republican priorities stand, Utah Representative Jason Chaffetz has clarified the GOP’s position quite clearly within the last couple weeks. Chaffetz, the smuggest congressman alive and the head of the House Oversight committee, recently conjectured that Donald Trump is rich already, therefore he cannot possibly be corrupt and looking into Trump’s conflicts of interest in connection with Russia is just a waste of time. And don’t even mention all the fraud with the Trump foundation. Chaffetz thinks nothing is wrong there despite Trump admitted to self-dealing. All Chaffetz wants to do is investigate Hillary Clinton.

So the rich aren’t corrupt, eh? Just let that sink in for a minute or so. There’s a whole laundry list of rich people who’ve committed white collar crimes. Just go back to the financial crisis of 2007 and 2008 and the Great Recession and the sub prime mortgage fiasco. Or how about the Enron scandal. Tons of greedy CEOs and corporate plutocrats who got off scot free with all the loot. Basically Chaffetz seems to be saying that only people who don’t have money could possibly be corrupt and that people who are rich are above silly laws and regulations. Plutocrats —> good; working poor —> bad.

Remember when Pussygate erupted, Chaffetz said he couldn’t possibly support Donald Trump. But Trump is president now, so Chaffetz is just going to look the other way as are all the other ‘ethical and moral’ Republicans. Chaffetz has shown such partisanship and lack of integrity as a congressman that he cannot be trusted to do his job and police his own party. Like The Atlantic said in their article, you might as well call his committee the House Overlook Committee. There are a lot of people angry at Chaffetz as evidence by his town hall meeting back in February. Maybe, just maybe, he and a ton of other Republicans will be ousted in 2018. 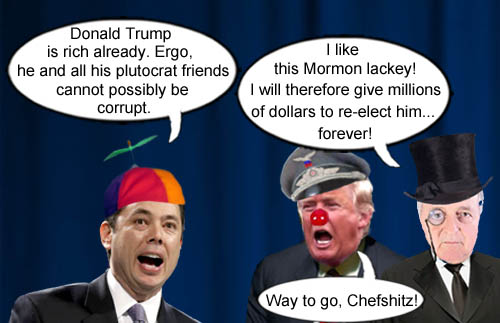 Smuggest congressman alive, Jason Chaffetz displays his faultless logic as head of the House Oversight Committee, that plutocrats are saintly angels and couldn’t possibly be corrupt.