The big news this past week was definitely the passing of the Affordable Care Act(ACA) a.k.a. Obamacare, which should be good news for all Americans, especially those who don’t have any insurance. Surprisingly, the ACA was passed as being constitutional by a 5-4 vote. Even more shocking though was that it was Chief Justice John Roberts who cast the deciding vote instead of the usual swing voter, Judge Anthony Kennedy. Media pundits all over the web have hailed that Judge Roberts has saved the court from being seen as the judicial branch of the Republican party with his reportedly last minute decision to go against the grain. Really??  This man thinks corporations are people!  Roberts hasn’t changed. We think this vote was just a bone being thrown to the public and he took one for Team GOP. After all, although the health insurance industry will have to change it’s ways(i.e. no more denying coverage to people with pre-existing conditions, spending 80% of the customers premium dollars on actual medical care, etc…), it still is getting 50 million more customers thanks to the law’s mandate (oops…tax). Besides, the individual mandate was originally a Republican idea (they were for it before they were agin’ it). When you consider Justice Scalia’s rant on the SB1070 dissent and Justice Kennedy’s surprising vicious dissent on Obamacare, you really can’t trust the Court especially when it’s loaded with right wing, activist judges. It means that in the future, on potentially contentious cases, the conservatives will continually point to Obamacare as proof that they aren’t political. Then they will proceed to decide like the GOP judicial branch that they are. Yep, Washington D.C. still stinks like cow patties on a hot summer day folks. 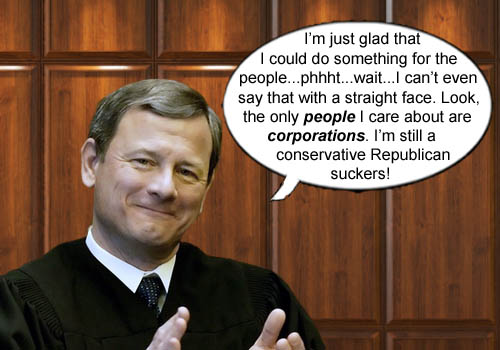 Chief Justice John Roberts basks in the afterglow of his decision to save the Supreme Court from itself with the passing of the Affordable Care Act.