The crap is spewing forth fast and furiously from the flak generator that is the Trump administration and its drooling lackeys at Fox News, a.k.a. the Republican Propaganda Network. And with every new report, America’s Impeached CEO/Dictator and petulant man child Donald Trump looks more and more like he should be the occupant of a rubber room instead of the Oval Office.

Our megalomaniac, clueless Leader has recently been touting how horrible life will be in Joe Biden’s America, regularly pointing to protests against racial injustice and police brutality that sometimes turn deadly as in the case of the Kenosha, Wisconsin shooting where a Trump supporting teenager crossed state lines to shoot people. But like the linked article above says, “Whatever might happen under Biden, this quite literally is happening under Trump”. Or in other words, Trump is projecting like he’s done during his whole clusterf*ck of a presidency.

Trump has even openly encouraged this chaos. Earlier this year he urged supporters to liberate their respective states over mask mandates. This past week, he rambled on and on about ‘dark shadows’ in an incoherent interview with a loud, annoying, blonde journalist (we refuse to mention this vile witch’s name) on Fox News. Videos have surfaced where Trump has proclaimed that protesters will use ‘bags of soup’ as weaponry against police. Trump has encouraged his followers to vote twice while campaigning in North Carolina and Pennsylvania, two swing states that are leaning toward Biden in the polls. But probably the most damning piece of Trump’s insanity is the revelation that he considers soldiers who were captured or killed in action ‘suckers’ and ‘losers’. We have no doubt this is true because, as the article in the Atlantic mentions, he showed the same disrespect for the late John McCain about being a POW, the late George H.W. Bush about being shot down in WWII and his own Chief of Staff John Kelly about his son serving and dying in Afghanistan.

What’s even more disturbing is that the event where Trump muttered his repugnant remarks happened in 2018 and we’re just now hearing about it. People who knew about his statements sat on it for two years, doing nothing. Why was this information not reported immediately? Why was this information not mentioned when Trump was getting impeached? The whole Trump presidency and his vile supporters in government and the corporate media stink like a sewer in a fetid swamp. Trump is dangerously inept and just as inane are the Republicans who won’t stand up to him or cower in the shadows doing nothing. The American people need to restore democracy to America and vote Trumpty Dumpty and his sycophantic enablers out of office on November 3rd.

In eerily parallel reality, American CEO/Dictator Donald Trump continues to be a mentally defective wanna-be world leader who has led America into a world of chaos that threatens the very tenets of democracy and is ripping this country to shreds while simultaneously ruining our country’s standing on the world stage.

Apparently these days, Americans seem to be obsessed with psychotic sociopaths who want to create chaos.

Armed Police In Schools: What Could Possibly Go Wrong?

In the wake of the shootings last month in Newtown, the big debate now is whether or not to allow armed police in schools. Of course, the NRA and their bought and paid for Republican lackeys are all for this. In their view, the only way to truly be safe is if every single person in this country has at least one gun on their person at all times. Hell, even teach the younguns how to shoot as soon as they can walk. In other words, convert our civilization into a banana republic.

Yes there is nothing more comforting and exciting for a child than seeing an armored police man holding an assault weapon while they play with their games and toys. Nothing bad could possibly come from that, right? The phrase ‘Violence begets violence’ keeps coming to mind. 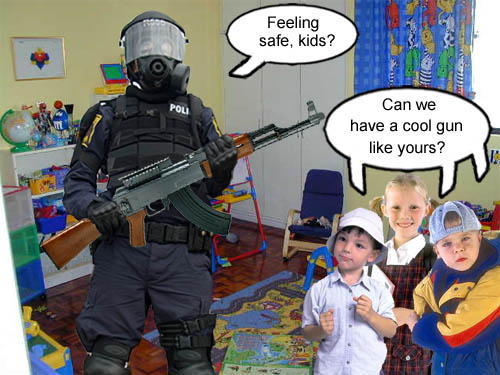 With the addition of armed police in schools, America’s rich tradition of gun lust is guaranteed to be handed down to future generations.