Australia On The Barbie

These are trying times not just for the United States, but for the entire world. Tensions are high in the Middle East with America’s assassination of Iran’s general Qassem Soleimani and Iran’s retaliatory attack on U.S. bases in Iraq, not to mention Iran’s accidental shooting down of a commercial airliner. There is the impeachment saga of Donald Trump and his continuing attempts with help from his flying monkey lackeys in the Senate at distracting Americans (see Iran attack).

But probably the most gut wrenching events happening now are the wildfires in Australia. We’re environmentalists here at the Bucket and it’s depressing to see the loss of so much wildlife to these raging fires, which are exacerbated by climate change. Estimates are that possibly one billion animals have been killed by the conflagrations which are consuming wide swaths of eastern Australia. Some threatened species like the tiny dunnart, potoroo and glossy black-cockatoo are being pushed to the brink of extinction. The damage is devastating and heartbreaking.

But the most frustrating thing about it is that the conservative leaders in Australia, much like their conservative counterpart Republicans in the United States are big time climate change deniers. Prime Minister Scott Morrison has received a boatload of flack for his handling of the crisis. He actually took a vacation to Hawaii while Australian citizens grappled with the fires. Of course, Morrison blamed it all on a “breakdown in communications”. He was also roundly booted from a town in New South Wales where citizens, fed up with the government inaction, heckled him thus driving him away from their town. In our estimation, Morrison deserves every bit of criticism. His and other corporatists attitude is to protect the fossil fuel industries at all cost and to ignore the obvious results of climate change, flippantly dismissing bushfires as something Australia always have had, this year it’s just a little more severe. But Australia’s summer temperatures have broken records for the last several years and the hot, dry air is only making the bushfires that much worse.

The crisis is real and Australia is in danger of losing not only its unique land wildlife but also its diverse sea life as well. The Great Barrier Reef is also in tremendous peril. The leaders of the world need to stop being greedy and consumed by materialism and the pursuit of capitalistic wealth. Like we’ve said over and over here, there is no planet B! If the living plants and creatures on this world die, we die! Since humans have commandeered this planet, it’s our responsibility as its ‘smartest’ species to make sure all life survives. Capitalism is killing life on this planet. It’s time for our leaders to pull their greedy fricking heads out of their greedy fricking asses and pass laws, a.k.a regulations, against polluting industries throughout the world.

A Little Toxic Crude Oil On Your Vegetables

There’s one thing that is working well in the Trump administration and that is the flak generator of meaningless crap that America’s CEO/Dictator, Donald Trump, spews forth on a daily basis. This drivel distracts the general public from news like the Keystone Pipeline spilling 210,000 gallons in South Dakota a couple of weeks ago. Of course, this news flew under the radar thanks to our orange haired man child in the White House.

This leak came at a crucial time as construction of the Keystone Pipeline was up for approval in Nebraska. Many citizens of that state are concerned that leaks will become commonplace and ruin their drinking water, provide toxins for the cattle and destroy crops of vegetables. But unfortunately, in typical conservative fashion, Nebraska chose short monetary gain over environmental health. The Nebraska Public Service Commission voted 3-2 to allow the pipeline thus bringing potentially thousands of jobs temporarily but only about 50 permanent positions.

EPA chief and anti-science, know nothing lawyer, Scott Pruitt, (we openly despise this man!) always touts the oil industry’s position of how safe drilling and transporting the oil is. We’ve mentioned repeatedly the lies and deception Republicans spread about drilling.  It bears repeating this fact that there’s been 3,300 pipeline incidents since 2010. Yes, 3,300 incidents!!!! The fact is that numerous things can go wrong in drilling and extracting oil, especially in the midwest where temperatures regularly flux between brutal hear and mind numbing cold. Well, we hope Nebraskans enjoy a little toxic crude oil on their vegetables. 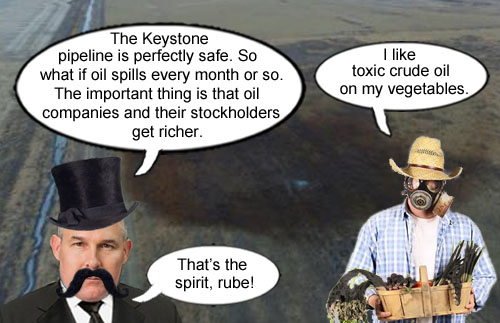 Trump and Pruitt’s EPA: Nothing To See Here Folks

Trump’s EPA, with Scott Pruitt at the helm is the planet’s worst nightmare. We’ve commented before about this climate change denier and complete jackass here and here. This corporate lackey has been single-handedly destroying all the mechanisms in place to keep the coal, gas, oil, mining, logging and polluting industries from running amok and destroying what’s left of our environment. We claim to be a nation of laws. Regulations are laws that corporations have to abide by, just like citizens have to obey civil law. Regulations are an essential check and balance to guarantee that corporations don’t go too far like they did in the twentieth century before the creation of the EPA.

Among the things Pruitt has done recently:

Pruitt and his EPA attacked an AP reporter for reporting about flooded Superfund sites in the Houston area. But apparently journalists are supposed to turn a blind eye, like Republicans do, if there’s any environmental problems. Nothing to see here folks!

Pruitt has gutted water regulations that will allow fracking waste dumping in the Gulf of Mexico. The Gulf is still recovering from the 2010 Deepwater Horizon spill and is now dealing with a new 600,000+ gallon oil spill that the national press doesn’t seem interested in covering because…you know…stock prices might go down. Nothing to see here folks!

Pruitt has issued a directive to curb settlements with outside groups, otherwise known as sue and settle. Showing that he’s a true corporate lackey, this is another attempt by corporations to limit the harm the public can do. On the finance front, look at this week’s vote by Republicans to make it harder for class actions suits against banks and credit card companies. This is because the Republicans care only about their corporate benefactors. They could give a rat’s ass about the consumer protection. Nothing to see here folks!

Pruitt pulls climate change scientists out of a climate change conference because…you know…they might actually show that Pruitt is full of shit. Nothing to see here folks!

Pruitt announces that the EPA will repeal the Clean Power Plan enacted by President Obama. Like other conservative Republicans, they just can’t accept the fact coal is a dying industry and like oil and gas,a thing of the past. It would be much better to invest in clean, renewable energy solutions like wind, solar, hydrogen and biofuels. But again, nothing to see here folks!

Let’s get one thing straight: Scott Pruitt is a lawyer. He knows squat about science. How is it that a lawyer is telling scientists what science is good and what science is bad? He’s got about as much business being head of the EPA as a wolf should be in charge of the hen house. Maybe that’s why he’s increased the security detail around him. He knows he’s being an asshole and he thinks some environmentalist may actually get sick of his shit enough to do something drastic about it. We’ve got a solution Mr. Pruitt: quit being a goddamn dick!!! 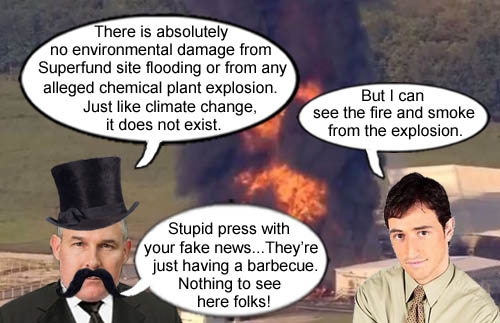 Trump administration EPA chief, non-scientist and friend to polluters everywhere, Scott Pruitt is now attacking the press for reporting potentially dangerous leaks and spills to the general public because the precious energy companies may lose their stock value, which in this country is more important than human lives.

While the Republican Health Care Plan failure, Trump’s Russia connections and a multitude of other daily flak from Trump’s bumbling acolytes like Devin Nunes, Sean Spicer and Jared Kushner have taken center stage, the Republican’s war on the environment has commenced in the background and it doesn’t look good for nature, science and the general well being of every living thing on this planet.

Trump approved going ahead with the Keystone XL pipeline despite protests from native Americans and environmentalists citing that it will only exacerbate climate change. But of course, new EPA administrator and lawyer (non-scientist), Scott Pruitt, despite overwhelming scientific consensus by climate scientists and experts, says that climate change isn’t real. Basically, Pruitt is just a lackey for the fossil fuel industry and will anything to deceive the public about climate change. Therefore, the Keystone XL pipeline can commence and oil barons like Secretary of State, Rex Tillerson, can reap the benefits.

To illustrate how inept and corrupt the corporate media is about reporting anything bad about the oil industry, take a look at this website which reports oil and gas pipeline incidents from 2010 to the present. 3,300 incidents! That’s a hell of a lot of incidents! So why haven’t we the citizens heard about them in the news media?

The Republican’s war on science is nothing new. Read the books Republican War on Science by Chris Mooney and Crimes Against Nature by Robert Kennedy Jr., both released during the Bush Administration, and you’ll see that the GOP has repeatedly put short term profit of the coal, gas and oil industries (major contributors to the GOP coffers) above long term consequences for the environment. To illustrate this, CEO/Dictator Trump signed an executive order last week which rolls back more of Clean Power Plan Obama’s regulations and enabling the oil, gas and coal industries to pollute to their hearts content. According to the GOP’s spiel, they’re getting rid of job killing regulations. Big deal, so we can have jobs that kill people in the long run? Besides that the promise of jobs coming back is another con. According the article linked above, “rolling back the Clean Power Plan and other environmental regulations won’t restore jobs”. So Trump and his Republican cohorts are once again conning the American public. But this con will have nasty repercussions for all of us, in the form of more pollution, risk of exposure to hazardous chemicals and gases and creating an unhealthy environment for humans and other species. 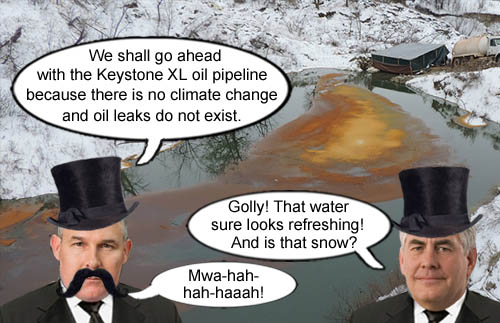 EPA director Scott Pruitt and Secretary of State/Oil Baron, Rex Tillerson, perform their patented gaslighting trick on the citizens of planet Earth by denying the existence of climate change, oil leaks and anything else which may disrupt their agenda of profiting off the environment at any and all cost.