Australia On The Barbie

These are trying times not just for the United States, but for the entire world. Tensions are high in the Middle East with America’s assassination of Iran’s general Qassem Soleimani and Iran’s retaliatory attack on U.S. bases in Iraq, not to mention Iran’s accidental shooting down of a commercial airliner. There is the impeachment saga of Donald Trump and his continuing attempts with help from his flying monkey lackeys in the Senate at distracting Americans (see Iran attack).

But probably the most gut wrenching events happening now are the wildfires in Australia. We’re environmentalists here at the Bucket and it’s depressing to see the loss of so much wildlife to these raging fires, which are exacerbated by climate change. Estimates are that possibly one billion animals have been killed by the conflagrations which are consuming wide swaths of eastern Australia. Some threatened species like the tiny dunnart, potoroo and glossy black-cockatoo are being pushed to the brink of extinction. The damage is devastating and heartbreaking.

But the most frustrating thing about it is that the conservative leaders in Australia, much like their conservative counterpart Republicans in the United States are big time climate change deniers. Prime Minister Scott Morrison has received a boatload of flack for his handling of the crisis. He actually took a vacation to Hawaii while Australian citizens grappled with the fires. Of course, Morrison blamed it all on a “breakdown in communications”. He was also roundly booted from a town in New South Wales where citizens, fed up with the government inaction, heckled him thus driving him away from their town. In our estimation, Morrison deserves every bit of criticism. His and other corporatists attitude is to protect the fossil fuel industries at all cost and to ignore the obvious results of climate change, flippantly dismissing bushfires as something Australia always have had, this year it’s just a little more severe. But Australia’s summer temperatures have broken records for the last several years and the hot, dry air is only making the bushfires that much worse.

The crisis is real and Australia is in danger of losing not only its unique land wildlife but also its diverse sea life as well. The Great Barrier Reef is also in tremendous peril. The leaders of the world need to stop being greedy and consumed by materialism and the pursuit of capitalistic wealth. Like we’ve said over and over here, there is no planet B! If the living plants and creatures on this world die, we die! Since humans have commandeered this planet, it’s our responsibility as its ‘smartest’ species to make sure all life survives. Capitalism is killing life on this planet. It’s time for our leaders to pull their greedy fricking heads out of their greedy fricking asses and pass laws, a.k.a regulations, against polluting industries throughout the world.

We’ve commented many times before about Arizona’s junior Senator Jeff Flake. Why? Well, we live in Arizona for one thing and it’s our duty and right to comment about our government representatives. We also happen to think he has Mitt Romney-esque used car salesman abilities. He was for and against gun control. He claims to be a champion of the people, and yet continually votes in favor of corporate interests. He claims to be Mr. Bipartisan, but continually votes with along party lines with his Republican colleagues. If you’re looking for a hypocrite of the first order, look no further than Flake.

Flake made a big deal about not endorsing Donald Trump for President. Even now he’s come forward stating that Republicans need to stand up to him. Of course, in true salesman fashion, he’s also plugging his new book, which we will not provide a link to because we have no doubt it’s loaded with self serving bullshit. While stating how against Trump he is, he’s voted for most of Trump’s agenda 95% of the time, including his horrendous health care bill, which didn’t pass because Arizona’s senior Senator (in more ways than one) voted against it. Flake’s behavior is pretty much the actions of a feckless enabler.

To show you how much he’s in step with Trump, here’s a statement by orange haired rage monster’s about rolling back ‘job killing’ regulations for the polluting oil, gas and coal industries:

Compare them to a blurb from Flake‘s own newsletter that he mails out to Arizona constituents touting his great actions:

Arizona ratepayers and businesses shouldn’t be forced to shoulder the burden of EPA’s costly, convoluted regulations. By holding EPA accountable for its actions, we can keep our air clean without creating job-killing regulatory uncertainty.

Yes those nasty ‘job-killing regulations’, what an annoyance they are. Why not just get rid of all of them, then industry can dump their waste where ever they want and pollute the air just like China. But the point is made; Trump and Flake are on the same page, just like all the other Republicans. The GOP’s so called opposition to Trump is nothing but bullshit!

It’s no secret that Flake supports corporate America over average Americans. But he is also a big time corporate lackey, like most Republicans are, of the big polluting industries in this country. As a matter of fact, Flake has a career 9% lifetime score on the League of Conservation Voters Environmental Scorecard. So we ask Mr. Flake, what’s the point of repealing ‘job killing’ regulations if those said jobs end up killing people with the resultant pollution and poisonous wastes and by products?

Finally, Trump has launched attacks on Flake because of what he’s said about Trump in his book. Trump has announced support for nutty Teabagger patriot Kelli Ward (known by her moniker ‘Chemtrail Kelli’) in the upcoming 2018 senate race. But again, this is just political theater because Flake has sided with Trump 95% of the time like this article at FactCheck.org states. So now, not only is Flake being attacked by the Democrats, but the radical right wingers in his own party are attacking him as well.

So we implore Arizonans to send Mr. Flake back to his hometown of Snowflake, AZ, which is a truly appropriate place for this Republican to live. We certainly hope the Democrats in Arizona get their act together and put forth a decent candidate to run against this hypocritical used car salesman in 2018. 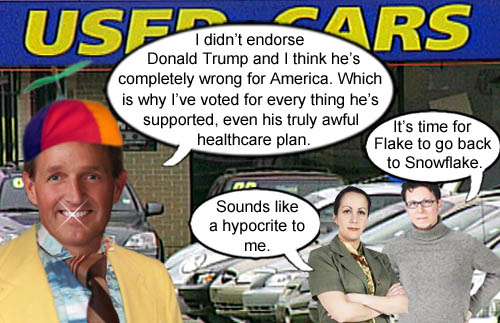