The fallout from the release of the Mueller report (or should we say, Bill Barr’s Cliff’s notes of the Mueller report) continues and more and more questions have arisen. The majority of Americans want the entire report released, not the redacted ‘yada, yada, yada’ version offered by Attorney General and Republican obfuscator Bill Barr. The ‘journalists’ at Fox News, a.k.a. the Republican Propaganda Network, have been screaming their heads off about how other ‘fake news’ media should be apologizing for their treatment of the president. And of course, America’s CEO/Dictator and petulant man child Donald Trump has been his usual obnoxious self, proclaiming that everyone who said that there was collusion, especially the MSM or the ‘enemy of the people’, be fired or worse. Furthermore, the fine, right wing propagandists at Fox are clamoring for retaliatory investigations directed at Trump’s enemies.

As usual, conservative Republicans have a very short memory. Did they forget already about the Benghazi hearings which lasted two years and produced zero indictments; the very definition of a witch hunt. And conservative Republicans never apologized once for their treatment of Hillary Clinton or Barack Obama for that matter. Like we said on our previous post, the Mueller investigation was hardly a ‘witch hunt’ as it produced 37 indictments.  Because Barr has been so secretive about the report, of course the public is wondering what it really says, especially when even in Barr’s summary ‘fer idjits’  – “While this report does not conclude that the President committed a crime, it also does not exonerate him.” – , Trump clearly wasn’t exonerated on the charge of obstruction of justice, which was the most likely offense that would have resulted from the investigation anyway. 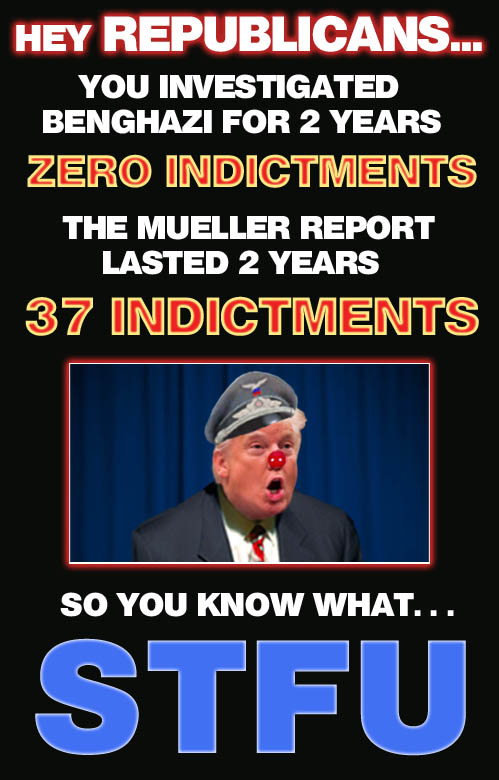