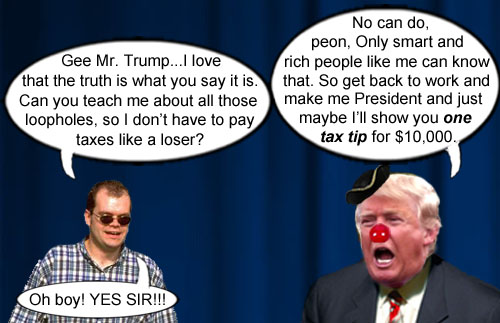 We’ve commented ad infinitum about our befuddlement over the fact that megalomaniac Donald Trump is the Republican nominee for president and is somehow ahead in some polls, despite running an absolutely miserable campaign, and presiding over one of the worst Republican conventions in history. It really boggles the mind! Can Americans really be this dense?

It goes back to previous posts(here, here and here) about some lower income Americans seeing themselves as temporarily embarrassed millionaires. They see a rich man like Donald Trump and they buy his con that he’ll make things better and that all that wealth will come flooding in and tricking down(where have we heard that before). There’s a reason why Trump says he loves the poorly educated; they’re pretty easy to con. And you throw in the fact that most Americans are horrendous at math and you’ve got a world class swindle going on right now in the Republican party which could not only affect the United States but the world in a stupendously negative manner.

Take Donald Trump’s claim a few months back that he gave a million dollars to a veterans charity. On the surface that seems pretty generous. But when you consider that his estimated wealth is 4.5 billion dollars, the one million dollar gift is only 0.022 percent (not even 1% folks!) of his wealth. This is like a person with a $1,000 dollars giving 22 cents to the charity; not very impressive in reality. But that’s the beauty of this con and Republicans use it all the time. They claim that these poor billionaires pay millions in taxes every year. To most of the Republican party’s lower income blue collar white workers, this seems like robbery because a million dollars to these people is an absolute fortune. But to billionaires, it’s a drop in the bucket.

For simplicity sake, take a CEO who earns a one billion a year. If the tax rate is 30%, then he should pay $300 million a year in taxes. Most of us would scream bloody murder if we had to forfeit this much money. But this CEO still has $700 million dollars left. He ain’t hurting! He’s still living high off the hog while you’re scraping and scratching just to get by. When he complains and gets his tax rate lowered he’s taking that extra money and selfishly puts it into offshore tax havens or buying up more real estate and mansions. He’s not letting that money trickle down by any means. In fact, he’s leaving us to foot his portion of the tax bill, one that he easily could afford. Money is power and with great power comes great responsibility. The 1% in this country want all the money and power but none of the responsibility.  Instead, we, the middle and lower classes, are squeezed and the corporate lackey conservative Republicans the 1% pay off in Congress convince everyone it’s the Liberals or the Democrats fault. The Republicans claim loudly that the rich, like Donald Trump, would never con anyone. Hah! Just look into Trump University and his numerous failed businesses. If you’re supposed to run the government like a business, like many Republicans claim, then Trump is the wrong person to be CEO. The astonishing truth is that if you’re a Trump supporter and you make less than $125k a year, you’re voting against your own interests. In short, DO THE MATH! 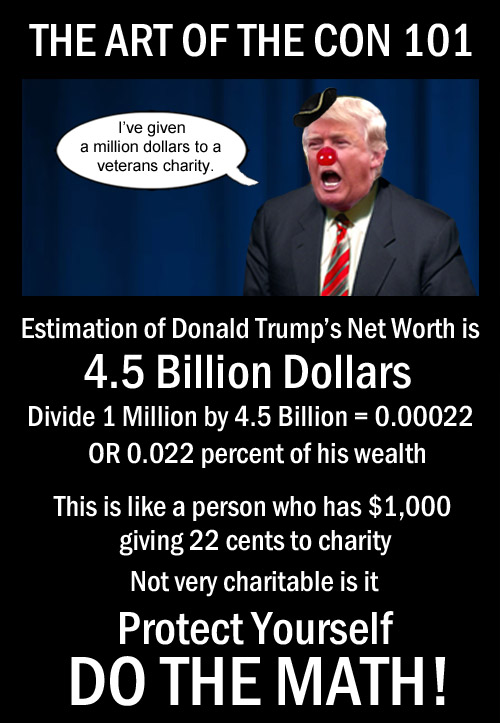 Thanks to the atrocious and pathetic math skills of Americans, authoritarian. megalomaniac con artist, Donald Trump, is on the verge of becoming President.

A special election is coming up here in Arizona on May 17,2016 that deals with the funding of Arizona’s woeful education system. This article at DailyKos explains the issue better than we could. The Republicans is this state have been trying since forever to release all that public land so private interests(land developers) can make money on it. So it’s perfectly natural that privatization fans, a.k.a. Republicans hold Arizona’s children as hostage – “fork over your precious land or the kids get it!” The answer to a better education is solved by increasing the corporate tax or just raising taxes. But corporate, business and private interests are of primary importance here in the land of the Republican wingnuts and taxes are a four letter word. Which is why corporate friendly tools, like Governor Ducey, are so actively trying to pull this fraud on Arizonans. Like the article at DailyKos says, it’s a bit dubious that all the slick, special, private, monied interests support Prop 123 and all the regular folks, who aren’t so richly backed, are saying nay. Just another day in the clusterf*cked state of Arizona politics. At least we’ve got beautiful scenery…er…ummm…maybe not for much longer. Happy Earth Day everyone? 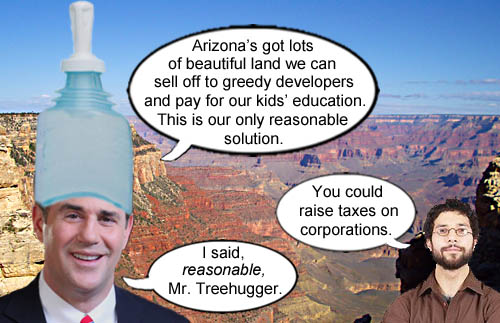 Arizona Governor Doug Ducey (pronounced douchey) declares that the only ‘reasonable’ way to save Arizona’s abysmal education system is to sell off the land to ‘private interests’ a.k.a. developers and industry.