In keeping with the Congress sucking theme…

Recently, a bill that would have strengthened background checks for gun purchases failed to pass despite passing 55-45, this despite a majority voting for it and 90% of Americans wanting stronger background checks. Republican Senators who voted against the bill proudly stated their obstructionism. Mitch ‘The Turtle’ McConnell even mocked the legislation on his facebook page after the vote. Then of course there is the dishonorable Senator Jeff ‘Two-Face’ Flake (but what a great smile and wow, the hair!) from our not-so-great-lately state of Arizona. He told constituents that he supported background checks and then promptly voted against the bill. Then his teenage son recently got into hot water when he tweeted homophobic and racist tweets on Twitter.  That’s would Jesus would do, right? So much for compassionate christian conservatism.

It’s nice to know that our elected officials are keeping their priorities straight, eh? 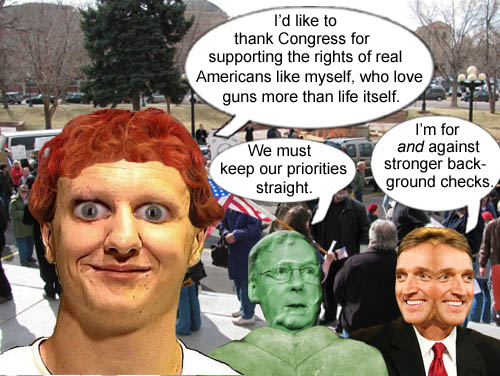 American gun lovers rejoiced after GOP Senators like Mitch ‘The Turtle’ McConnell and Jeff ‘Two Face’ Flake struck down legislation that would have required universal background checks on all gun purchases.