We’ve been enjoying the wonderfully mild weather here in Arizona (hence, fewer posts), doing things outdoors to try and boost our morale a bit with all the insanity going on right now, not just in this country, but in the world. We thought we were getting better but then Russia’s dicktator (misspelling intended) Vladimir Putin had to go and invade Ukraine. We would have thought that Russia had enough land but apparently not. The rest of Europe learned its lessons well from World War II and the Cold War, but apparently Russia wants to relive those glory days of old. Fortunately, most of the world has condemned Putin’s brazen attack, even his allies in Czech Republic and Hungary. But the Ukrainians are fighting hard because they absolutely want democracy, not to be a puppet state of Putin.

Predictably, the only person who seems to be supporting Putin is his fan boy, TFG. The twice impeached, megalomaniac man child couldn’t stop praising his man crush about the invasion at CPAC. Up until the actual invasion, most right wing conservative Republicans were supporting Putin more than Biden, serving as useful idiots for Putin’s authoritarian propaganda. How’s that for being a patriotic American. They almost universally praise Putin as being stronger than Biden. Apparently, being an authoritarian asshole who bullies everyone else is the GOP’s definition of strong. Of course, the Republicans are blatantly pursuing a course of anti-democratic, authoritarian rule with their mostly unapologetic support of Trump and the January 6th attempted fascist coup. No wonder they’re in love with Putin. Maybe TFG could move to Russia and become a citizen like tough guy actor Steven Seagall.

We’re reposting a photo-toon from December 21, 2016 because T**** and Putin are still TPing the world; Putin in Europe and Asia and TFG with his insipid rallies and stupid speeches here in America. Sorry, folks — the planet is still royally screwed until we figure out a way to rid ourselves of these authoritarian, right wing, fascist assholes. Maybe we can interest T & P to take a ship to Mars with other greedy, corporatist jackasses Jeff Bezos, Elon Musk and Richard Branson. Then each of these manly men could all praise each other with their hot air until they run out of oxygen.

We’re not pulling any punches here at the Bucket. We are vehemently anti-Donald Trump. Sure Hillary Clinton isn’t perfect, but she is basically a centrist Democrat and a moderate Republican. Like our guy Bernie Sanders has said, even on her worst days, she’s still one thousand times better than Mr. Trump.

There are countless reasons to not elect GOP frontrunner Donald Trump president. So far, he’s been as fickle as the wind on foreign and domestic issues alike. Oh, it’s Tuesday, then he’s for punishing women for abortions. If it’s Wednesday’s and the wind’s from the northwest, then women shouldn’t be punished. He used to be for gun control, but now he’s all for everyone having guns everywhere. Other issues he’s been for and against: transgender bathroom usage, same-sex marriage, NATO, reducing the national debt, Planned Parenthood, violence for political gain, etc…

But probably the biggest reason not to elect this psychopath is his foreign policy experience. We can’t think of a more dangerous person to have his finger on the nuclear button than this egomaniacal, authoritarian rage monster. The thought should make every sane Americans blood run cold. Let’s take the recent incident when U.S. sailors ventured into Iranian waters and were taken prisoners. Within a day, thanks to diplomacy by the Obama administration, the sailors were released. But Mr. Trump wanted to get tough with Iran (and possibly start World War III), which will undoubtedly be a nuclear war. He’s already sending mixed messages on foreign war policy as well. He stated that the U.S. shouldn’t be involved in foreign wars. But then he turns around and says he’d carpet bomb ISIS and show force in Syria. Can you imagine the Donald handling incidents with North Korea, China, the Ukraine, the Middle East. Just the slightest provocation would send Trump to the nuclear button. He’s already said, he would use nuclear weapons. Who knows — if Mexico doesn’t agree to build the border wall that Trump wants, he may send a few warheads southward.

The bottom line is this; if a person is thinking about voting for Trump, then that person should be prepared to go to war themselves, or send their sons, daughters or grandchildren to war. And this war won’t be just any war. It will be World War III: the Trumpocalypse. 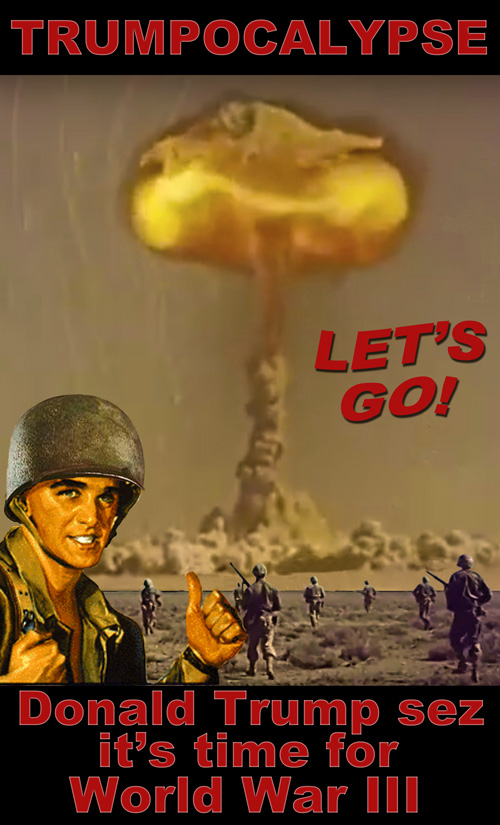 In Donald Trump’s new patriotic poster, an exuberant Trump supporter exhorts other Americans to join the fun in World War III: the Trumpocalypse.