One of the more intriguing recent developments has been the whole GameStop story and how a bunch of neophyte traders on Reddit spanked the greedy hedge fund pirate plutocrats of Wall Street and beat them at their own game.

We won’t go into depth on explaining what happened. We’ll let this article explain the proceedings. Or you can let Tom Tomorrow at This Modern World explain it in cartoon format. But in a nutshell, a group of investors on Reddit, a group called WallStreetBets or WSB, decided they were going to teach the greedy hedge fund managers a lesson. One tactic hedge fund managers use is to short sell stocks. They look for stocks that are failing and basically bet that they’ll continue to die. So they borrow shares to sell and buy all the stock at a lower price before paying off their lender and usually make a fortune. GameStop is a brick-and-mortar video game retailer whose days are numbered because of online video gaming and the pandemic, so they were on the hedge funders lists of future profits. But WSB stepped in and bought stock so that the stock price rose precipitously, which means that the hedge fund managers, who were betting that the stock prices would fall, lost money, BIG TIME. We’re talking billions of dollars. The trend continued for other failing businesses like AMC, Bed Bath and Beyond, and Blockbuster, whose stock price rose 3,990% in a week.

If you say this sounds like rigging the system like that of a casino, you are absolutely right. The WSB people showed that the hedge fund managers have been using Wall Street as a casino for years to get filthy rich with absolutely no repercussions. Of course, now that WSB did the same thing, plutocrats are crying foul and proclaiming that there needs to be regulations in place. You see, only plutocrats are supposed to win money on the stock market, while the rest of us working stiffs just work our asses off making these avaricious assholes richer. So, the greedy corporatists are fine with no regulations until they’re beaten at their own game and then they cry like babies.

We’re looking forward to see what kind of regulations Senators like Elizabeth Warren and Bernie Sanders have in store for the greedy fat cat capitalists in the next couple years. It could get interesting, folks.

The news is out on the Trump’s tax cuts and…surprise, surprise – refunds for the middle class are down and it appears the tax cuts only benefited the top 1% percent of Americans. But how can this be? American CEO/Dictator Donald Trump promised that every one would benefit. Could it be that Trump lied? Given that he’s gone over the 10, 000 lie mark just over two years into his presidency, YES, OF COURSE HE LIED!!!

We’ve commented before about how poor people view themselves as temporarily embarrasses millionaires and are cajoled into voting against their own self-interests by right wing propagandists, like Fox News, blaming everyone else but the real culprits (plutocratic capitalists) for their conditions. The scapegoats are always the same: minorities, people of color and people of different religions other than christianity – you know, people who are ‘different’. So these right wing, racist, conservative christians, although they are in the same boat financially as blacks, hispanics, other non-whites, Muslims, Hindus, Buddhists and atheists, will support politicians who create laws and policies that decimate the middle class and make their own lives even tougher. For example, the Trump administration has destroyed consumer protection regulations which make it harder for Americans to stand up for their rights and easier for corporations to do whatever the hell they want with no repercussions. With higher insurance premiums and no voice to change them, we’re all getting screwed. But it doesn’t matter to the racist Trump supporters, because at least non-whites are not becoming better off than them. So much winning. . . for corporations and plutocrats!

Talk Radio Personality Rush Limbaugh took a bold step last week at the Conservative Political Action Conference (CPAC) in Washington D.C. and proclaimed himself head of the Republican party. Limbaugh, sporting a black cowboy hat and southern style suit, announced that he would know like to be known as Boss Limhogg to which the crowd of sycophantic Republicans howled with an approving “gkew-gkew-gkew”.

“My fellow conservatives,” croaked Limhogg. “Remember back during the Iraq War when I said that we should never criticize the President and how un-American that would be. Well, screw that! We are the last bastions of true patriotic Americans and it is our duty to make sure that President Barack Hussein Obama, the magic Negro, fails at everything he does as President. He doesn’t truly represent Americans; he wasn’t even born in this country. His socialist agenda would be catastrophic for our poor bankers and Wall Street CEOs who are fighting valiantly to preserve the plutocracy that we’ve worked so hard to establish. He even wants to help those homeowners who were stupid enough to take those risky loans instead of the money lenders who bravely offered them. Why it’s the second coming of Stalin I tells ya!”

New RNC Chairman Michael ‘Roscoe’ Steele was the first to acknowledge Limbaugh’s unquestioned superiority. “I apologize for ever saying Mr. Limhogg was ugly or even worse, an entertainer. He’s the finest American I know and I am proud to be his right hand flunkey. Gkew-gkew-gkew!”

Georgia GOP Representative, Phil Gingrey, who openly criticized the radio personality in January, offered nothing but flattery. “I’m so sorry about ever saying anything negative about Boss. You’re the smartest person ever and I’ll always ask your advice on every issue from now on. I love you Rush, I truly do! Oh please forgive me Rush! Please oh please oh please! Gkew-gkew-gkew!”

Many big names in the Republican Party raved about the new Boss. Former disgraced Republican Congressman Tom Delay praised Limhogg loudly and strongly. “Boss Limhogg is a great role model and I know all about role models since I am one. Every American should want to be like Rush: overweight, obnoxious, crass, rude, hypocritical, egotistical, and drug addicted. Why the world be a lot better place if we were. Gkew-gkew-gkew!”

Evangelist Pat Robertson said, “Why if Jesus Christ was right here in front of me, which he hopefully will be very soon, he’d be saying that Rush is what Christianity is all about. Gkew-gkew-gkew!”

Former New York mayor Rudy Giuliani gushed, “I love Rush’s makeover. He looks like Boss Hogg and Johnny Cash all in one. I can see why he gets all the babes. Why if I were dressed up like a woman right now, I’d be all over that stylish tub of goo. Gkew-gkew-gkew!”

Dittoheads also expressed their support for Boss Limhogg. Cletus Dillman of Scarlet Thorax, Texas said, “I can’t stand the idea of being socialist. Everyone being equal and sharing things? As a Christian, I find that idea very offensive.”

Darryl Hull of Rebel Falls, Mississippi said, “I listen to Boss Limhogg everyday and I think he is such a regular guy. I would love to get together with El Rushbo and have a beer with him. That is if he ever steps foot outside his Palm Beach mansion or gets off the golf course at his country club. But I’m sure he’d acknowledge my presence.”

Boss Limhogg then dismissed his fawning minions. “In closing, we’ve got to get those Obama boys and keep our moonshine…er…money safe for all of Hazzard Coun…er…I mean the United States of America. Now everyone form a line so that you may come up here and kiss my ass” to which the audience gave a resounding “gkew, gkew gkew”. 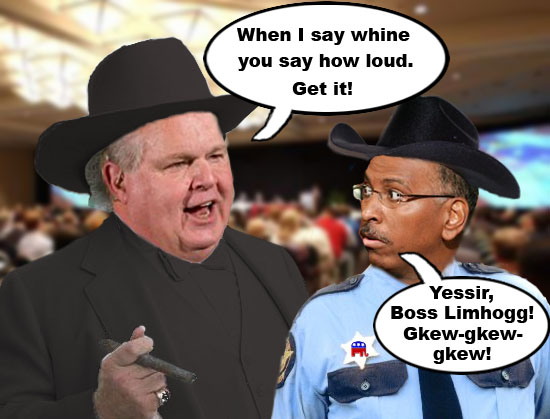