As the impeachment investigation rolls on, a disturbing piece of news bubbled to the top of the news cycle last week, (as if the last three years haven’t been disturbing enough). Apparently, in a recent poll, over 50% of Republicans perceive that America’s CEO/Dictator and petulant man child, Donald Trump, is a better president than the very first Republican president Abraham Lincoln, who most historians rank as the best president in the history of the United States. This is clear evidence that the conservative Republicans enabling and propping up Trump, especially the evangelical sheeple, are indeed cult-like in their devotion of this modern day golden calf and are seriously deranged. We’ll put this in a simple, blunt, concise statement. There’s no f*cking way Trump is even close to being better than Lincoln!!! Are you f*cking kidding!!!

We think it’s interesting to note that when Trump began his clusterf*ck of a presidency, he proclaimed himself to be like Andrew Jackson. Lincoln’s predecessor, James Buchanan, who served as Jackson’s ambassador to Russia in 1831, also idolized Jackson as a strong chief executive when he won the presidency in 1856. But Buchanan ended up being the worst president in this nation’s history and his incompetent actions, or inactions, led to a bloody Civil War which tore this nation apart for four years with repercussions that lasted well into the 20th century. Trump’s actions have also greatly divided this nation and has made the United States a laughingstock of the world. But the always egotistical Trump has openly suggested another Civil War if he is impeached and many of his armed, pliant supporters are ready to take action. So Trump is much closer to being like James Buchanan, the worst, than Abraham Lincoln, the best.

The Lincoln Memorial, which features a statue depicting honest Abe seated on a throne gazing down benevolently on his constituents, is one of the most visited monuments in the Washington D.C. area. We envision that an appropriate memorial for Trump would be one of the orange-haired megalomaniac seated on his throne tweeting out his infinite wisdom to his sheeple with his ‘massive’ hands. Given his recent baffling obsession with toilet flushing, the depiction is completely appropriate. Said monument will be located in a prominent place in Washington D.C. in an alley behind a KFC next to a dumpster which frequently catches on fire.

Since the midterm elections, America’s CEO/Dictator, Donald Trump, seems to be more and more unhinged. The recent incidents concerning Veteran’s Day memorials for soldiers and war veterans who gave their lives for their country illustrate how colossally inept, clueless and insensitive the orange haired man child is.

First, Trump was roundly criticized for skipping out on a memorial service for World War I veterans in Europe because it was raining. Then he ducked out of a memorial service on Veteran’s Day at Arlington Memorial Cemetery because he basically didn’t feel like it. Of course, he blamed his subordinates for his mistake in typical, authoritarian, Trumpian fashion. His disrespect toward military figures exemplifies a disturbing pattern with Trump that points to his deep insecurity when compared to men who have actually sacrificed something for their country. During the 2016 election campaign, Don the Con famously criticized John McCain stating “he likes people who weren’t captured”. Last week, the unstable megalomaniac criticized retired Navy SEAL Adm. Bill McRaven, who commanded the 2011 raid that took down Osama bin Laden for not capturing the terrorist mastermind sooner. This from a man who got out of service in Vietnam because of bone spurs and probably couldn’t win a game of Stratego with his youngest son Barron.

We have no doubt that Trump would probably find fault with former President, Commander of the D-Day forces and war hero Dwight D. Eisenhower, who we’re pretty sure would not be too fond of Trump. 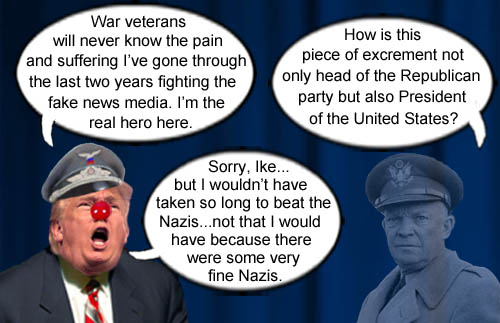 America’s CEO/Dictator, master strategist and most persecuted human being of all time, Donald Trump, whines that he’s a real hero and not war veterans who fought against the Nazis like Dwight D. Eisenhower.