It’s April Fools Day, so what better way to celebrate it then by poking fun at the biggest fool in America and all the fools who support and enable him.

The more the Trump administration falters, the more his enablers come to the forefront and not only lie their asses to the public, but also to themselves. We’ve mentioned again and again in our posts, it’s absolutely astounding that anybody bought Trump’s shit during the campaign season, but here it is April 2017 and he’s president of the most powerful country on Earth. This isn’t an elaborate April Fools Day prank; this is, extremely unfortunately,…REALITY.

But the biggest joke is on the christians who voted for this selfish, greedy, egotistical, materialistic bigoted megalomaniac, who isn’t like Jesus at all. As a matter of fact, he’s the polar opposite. How can christians justify and enable this man, who claims to be for the common person, but yet pursues policies which will leave them impoverished, sick and broken while making his rich, plutocrat brethren even richer? Like we said a couple posts ago, if you make under 100k a year and you vote Republican, you are voting against your own self interests and you are a sucker and a fool. Or to put it in biblical terms, you are worshiping a modern day golden calf and that calf’s name is Donald Trump. 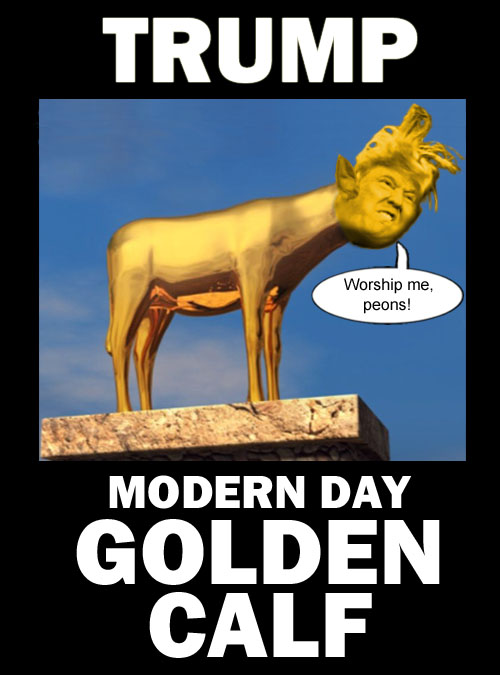 The biblical story of the golden calf has resurrected itself in the form of American CEO/Dictator Donald Trump.