We’re Not Living On Tulsi Time

With all the drama of the impeachment unfolding on a day to day basis, the Democratic presidential primaries have been pushed to the back burner.
Bernie Sanders, Joe Biden and Elizabeth Warren continue to be the front runners, with Mayor Pete Buttigieg, Michael Bloomberg, Andrew Yang and Amy Klobuchar still hanging on with the Iowa caucuses just a week away.

One name that is amazingly still in the race despite anemic poll numbers is the curious case of Tulsi Gabbard. It has been suggested by Hillary Clinton that she’s a Russian agent, which has caused Gabbard to sue Clinton for defamation. Former candidate Kamala Harris scolded her for her criticism of Obama and her fellow Democrats. Is she a Russian plant? We don’t know, but her vote of ‘Present’ during the historic impeachment vote certainly didn’t quash the rumors and she announced she won’t seek re-election for her congressional seat in heavily Democratic Hawaii. As a matter of fact, Ms. Gabbard is now the most disliked Democrat. Why would any sane, rational person who has been conscious the past three years vote against impeachment, especially when the evidence is so overwhelming that the President abused his power and obstructed Congress (not to mention obstructed justice as the Mueller report volume 2 concluded)? Trump certainly approved of her vote.

So, what’s Tulsi’s game then? Is she a contrarian who just likes to criticize others in her party to bring attention to herself? She does support Bernie Sanders, who is a social democrat. She has strongly advocated most of the progressive Democrat’s issues in the past. But then again lately, she does seem to talk a lot like a Republican. She has also been sympathetic to Syrian dictator Bashar Assad. Ms. Gabbard appeared regularly on Fox News during the Obama administration and cozied up to Trump and Steve Bannon.


So, really . . . what is Ms. Gabbard’s deal? What’s her motivation? What the hell is she up to? We here at the Bucket think it’s something more egotistical. We think that the enigma that is Ms. Gabbard sees that the stairwell to the Democratic nomination is blocked and will be for many years to come with every Democrat currently still running polling well ahead of her. Like Reagan and Trump, (both former Democrats), the possibility exists that she could get the Republican nomination if she switches parties. Her vote against Trump’s impeachment certainly endeared her to Trump’s nutbag supporters and her approval is very strong from conservative males (gee, go figure that! . . . see the saga of Sarah Palin). Plus, she’s from a heavily Democratic state. Look at all the fawning Democrats do over moderate Republicans from heavily Republican states who side (or appear to side) with Dems (the late John McCain, Susan Collins, Spiff Romney) and you’ll get it. You have to have a gynormous ego to run for president, and Ms. Gabbard certainly is developing a colossal one. Since she has absolutely no chance to win the Democratic nomination in 2020, here’s our bold and fearless, purely comedic conjecture prediction for Ms. Gabbard: she runs for President as a Republican in 2024. Remember: we predicted a Ralph Nader landslide in the 2004 election so . . . yeah . . . we’re . . . probably . . . wrong.

This Is The Word Of Arpaio

Once again, Arizona has moved to the forefront of the news with some more lunacy, this time courtesy of Secretary of State Ken Bennett. Last week, Bennett said that although he doesn’t believe it, ‘several constituents’ wanted proof that President Barack Obama was actually born in Hawaii, even though he officially released his certificate of live birth which has been verified many times by Hawaiian officials. Look at his CNN video about the ‘birther’ conspiracy. But this isn’t good enough for the ‘birthers’. And of course the head ‘birther’ in Arizona is Maricopa County Sheriff Joe Arpaio. Arpaio is known as “America’s toughest sheriff” because of his unorthodox disciplinarian methods used on prisoners such as making them wear pink underwear, live in tents, work on chain gangs and eat green bologna.  He’s no stranger to controversy. He’s currently being investigated by the federal government for abuse of power for his enforcement methods of the controversial anti-illegal immigration act SB1070. We remember when this unenforceable, discriminatory law was passed, a journalist famously asked Governor Jan ‘Skeletor’ Brewer, ‘What does an illegal immigrant looks like?’. In true Brewer fashion, she gave a deer in the headlight look, hemmed, hawed, mumbled and finally admitted she didn’t know. Because she knows that to enforce the law, you have to racially profile a certain segment of the population and to the conservative mindset, that means Hispanics.

Yes, Sheriff Arpaio has indeed been a popular figure in Arizona, especially with conservatives. He’s been in office for twenty years. He even had a short tv series on Fox Realty Channel. But we think his ego has gotten out of control. There’s a laundry list of controversies surrounding this man including several concerning abuse of power. His pursuance of the ‘birther’ issue using taxpayers money and the SB 1070 law are just two of the latest more annoying instances of this abuse of power.

So we say this to Sheriff Joe(like he’s going to listen to us): Please retire. Arizona can survive without you as Sheriff. You’re 80 years old. You’ve had a great twenty year run and a lot of great moments. Even we liked the pink underwear and chain gangs. But this latest escapade with the ‘birthers’ and SB1070 shows that it’s time to ride off into the sunset in true Arizona sheriff tradition. Please quit embarrassing our great state and give the reins to someone else.

So remember Arizonans: do ol’ Sheriff Joe and this state a big favor this fall and vote him out of office. 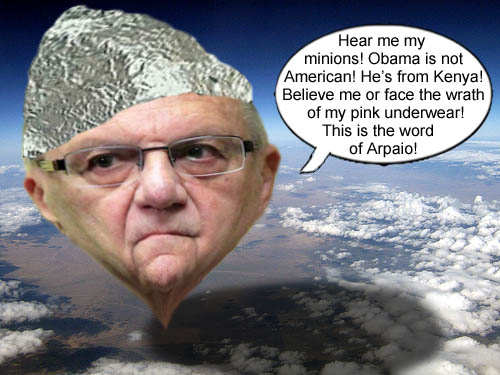 Space station astronauts took this photo of the ego inflated head of Maricopa County Sheriff Joe Arpaio rising up into the troposphere proclaiming his words of wisdom to all within earshot.