As we’ve noted before, GOP nominee Donald Trump and Russian President, Vladimir Putin have struck up quite the bromance lately. But it’s not Putin’s first bromance with a Republican President. George W. Bush and Putin developed quite a chummy relationship back during Dubya’s disastrous presidency. Bush even famously said, “I looked the man in the eye. I found him to be very straightforward and trustworthy. We had a very good dialogue. I was able to get a sense of his soul.”  Wow! Get a room will ya.

As a matter of fact, Trump and his VP nominee, Mike Pence, have stated that they think Putin is a stronger leader than Obama. And why wouldn’t Republicans not like the authoritarian dictator (we know he’s technically president, but come on!). Putin strong arms and bullies everyone and stifles dissent, just like Republicans. Gee, no wonder he has a high approval rating. If you disagree, you die. This is what the Republicans have been after since…well…forever; absolute power and dominance over not just this country, but the world.

There’s a reason why some people consider Putin the most dangerous man in the world; we’re talking James Bond kind of villainous. Putin sees a way to make Russia great again. Putin saw a sucker with Bush and he sees another simp in Trump. If he can cleverly get America to bite on several more disastrous quagmires like Iraq and Afghanistan, which would be likely with the hotheaded Trump in charge(we’re thinking Syria, Iran, Iraq again, North Korea, Ukraine and Mexico – basically World War III), America’s wealth would be bled away again and Russia would return to prominence in the world order.  So go ahead Trump supporters; make Russia great again and enjoy all those new wars in which you’ll be fighting. There’s a reason Millennials hate Trump; with him they have no future. 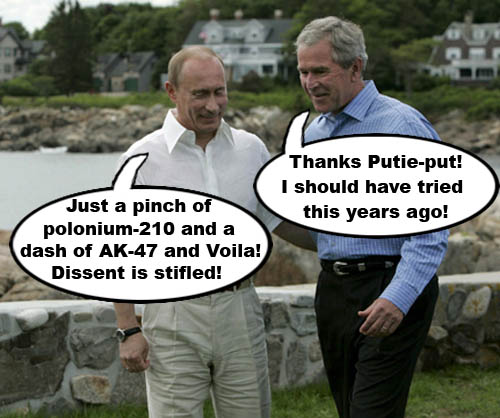 While rekindling their romance recently in Maine, President Bush and Russian President Vladimir Putin discussed possible solutions to some of their more difficult problems, like dealing with people who disagree with them.

As the Democratic National Convention wound up this week and the Democrats, the only sane party left in the United States, united to support their nominee Hillary Clinton, news surfaced that the Russians may have been involved in hacking the DNC email server. If that wasn’t enough, authoritarian demagogue, GOP nominee and comedian extraordinaire,  Donald Trump, “jokingly” hoped his pal Vladimer Putin hacked into Hillary’s email server to find missing emails. Way to go Trump! Nothing says patriotic like conspiring with the Russians and committing treason on your fellow American.This shouldn’t surprise anyone though because Republicans have been pulling this shit for the last half century at least. Remember Nixon sabotaging the Paris peace talks in 1968. Or how about St. Ronald Reagan’s secretive deal with Iran, behind the Carter administration’s back, in 1980. Then there’s the whole Watergate affair with Nixon again. And who could forget the malfeasance of the 2000 election, when the conservative leaning Supreme Court and Dubya’s brother Jeb, handed the presidency to George W. Bush. If you’re looking for filthy politics, look no further than your nearest Republican.

Then, to top it off, Trump then tried to distance himself from his hot bromance with Putin, by saying they’ve never met despite evidence to the contrary. What’s amazing (and frightening) is that there are still people who want this orange haired pathological liar to have his finger on the nuclear button. 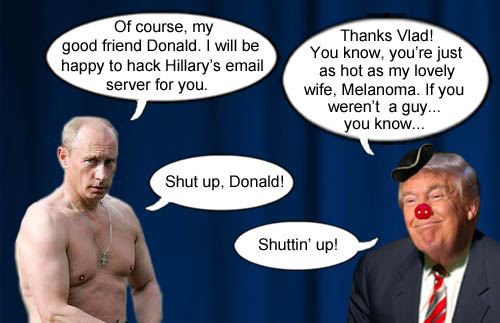 The budding bromance between Russian President, Vladimir Putin, and U.S. President-Wannabee, Donald Trump, seems to be taking all kinds of awkward turns and twists these days.