We’re in the last week of 2022 and there were several huge stories throughout the year: COVID-19 continued its assault on the human race, NASA sent another rocket to the Moon after fifty years and the Democrats preserved democracy for a little while longer and managed to pass major legislation in the process. But probably the biggest story on the world stage was the Russian invasion of Ukraine and the emergence of Ukrainian president Volodymyr Zelenskyy as a symbol of democracy for the world.

Last week President Zelenskyy made a surprise visit to Washington and he gave a impassioned speech to Congress. Zelenskyy is very media savvy and made a convincing argument for the United States’ continued support of Ukraine in their battle against Russia. The Russians thought they’d roll over their neighbors, but the Ukrainians have resisted admirably. How much longer will this war continue? Despite rumors of a cease fire coming soon, it appears that the war will more than likely drag on for most of 2023. Zelenskyy has said that the Ukrainians will never give up and we believe him. At least the United States has committed to helping Ukraine obtain freedom and democracy for its people. 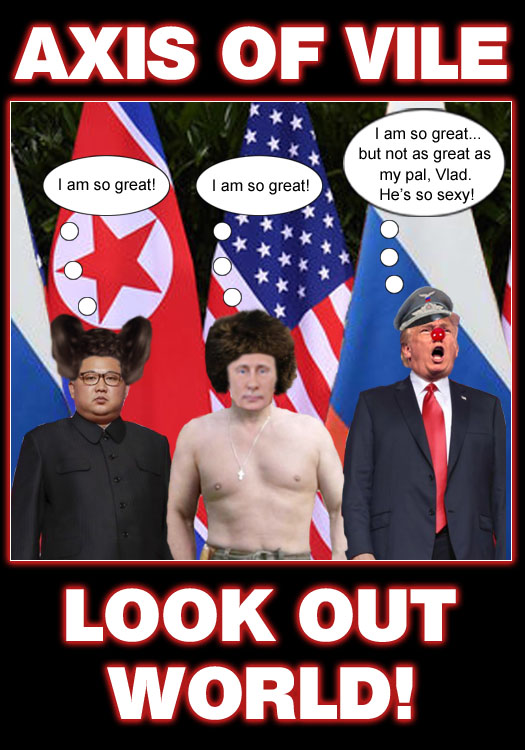 The Trump-Kim summit has concluded and there’s some strange and disturbing things that have become crystal clear. One is that, apparently Trump has decided to end our alliance with freedom loving western democracies like France, Germany, Canada and Britain. His disrespect of those countries leaders during the G7 summit couldn’t have been more obvious. Then he proclaimed that Russia should be invited back into the group, again avoiding any kind of bad mouthing of authoritarian Vladimir Putin, who has repeatedly repressed free speech and press in Russia as that country’s dear Leader since the 20th century.

Trump’s kind words for Kim Jong Un also brought concern since the North Korean dictator has proven to be a very cruel authoritarian leader in his own country. Trump even said that he wants the people of the United States to treat him the same way North Koreans treat their dear Leader; with awe and reverence. Most analysts conclude that this was clearly a victory for Kim. Trump’s actions have elevated a tin horn dictator to a seat at the adult table with the big boys of the world. So basically, we’ve made North Korea and Russia great and relevant.

So, America’s new tough guy allies are authoritarian dictatorships, North Korea and Russia. These are countries that value only true devotion to their leader and democratic institutions like free speech and freedom of the press are suppressed and punished with extreme cruelty and even death. The fact that so many Republicans are drinking the Kool-Aid and signing up for the ‘cult of Trump’ is truly alarming. Trump is looking more and more like a certain WWII dictator from Germany to us. Please refer to our handy dandy right wing conservative fascist checklist to see for yourself. 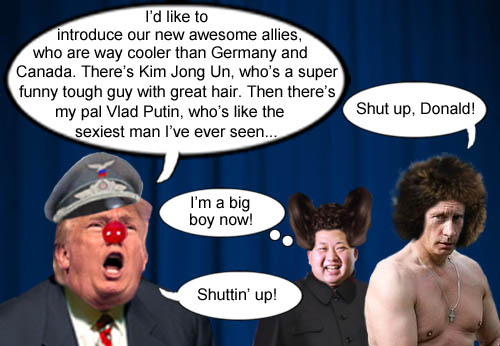