The United States isn’t the only country being overrun by right wing conservatives seizing control of the power structures. Many countries throughout the world have seen hard line conservative parties gain power and predictably are establishing authoritarian measures to make sure they stay in power. This past week, conservative Boris Johnson became the new Prime Minister in the United Kingdom. Johnson has been described as the British Donald Trump . . .you know . . . narcissistic womanizer with not a bit of intelligence. We thought that the U.K. went off the deep end when they voted for Brexit. With Boris Johnson taking the helm, we’re pretty sure the sun has set on the British Empire.

So, what is behind the rise of all these right wing, authoritarian conservative gaining power throughout the western world? Could Russian President Vladimir Putin have something to do with the rise of authoritarianism and the decline of western democracies? We’re thinking, yes. Modern day Russia is basically a corrupt oligarchy, where only the rich and powerful have a say so in how the country is run. Since the fall of communism and the Soviet Union in the early ’90s, Russia has gone through some pretty rough years which has given rise to the oligarchs. Putin was pretty peeved that his country lost the Cold War. But the former KGB operative is intelligent and very clever. Over the past twenty years, he and the deep pocketed Russian oligarchs have systematically used capitalism as a weapon against the western capitalist democracies and, as we’re seeing now, to devastating effect. They know that one common trait among all capitalistic countries is greed; the life’s blood of capitalism. There are any number of egotistical, power hungry people in western democracies who’d sell out their own mother for money, wealth and power. Trump’s connections to Russia are well known despite his protests and denials. Boris Johnson also has conflicts. Other countries have also shown a susceptibility to make corrupt deals with Russia.

In his testimony to Congress this past week, Robert Mueller explicitly warned that Russia interfered in the 2016 election and is on it’s way to mucking up our elections in 2020. And the Mueller report also states that Trump openly welcomed Russian interference (there are videos of Trump openly asking Russia to hack Hillary Clinton’s emails). Russian oligarchs have used corrupt, crony capitalism to amass their considerable fortunes and they will spare no expense supporting the best hackers available in undermining our democratic institutions. And yet Mitch McConnell blocked legislation that would provide protection against hacking in the upcoming election. We guess Turtle Boy knows that the Republicans can’t win again without Russia’s help.

So Britain now has it’s own Donald Trump. We here at the Bucket see Putin as a James Bond Super Villain who dispenses helpful hints for those wanting to remake western democracies into Putin-style oligarchies. All you have to do is buy off wacky haired, egotistical, narcissistic, populist, capitalist megalomaniacs like Boris Johnson and Trump, who love money, fame and power. Oh, and don’t forget those wacky haired communist leaders like Kim Jong Un.

Once again, America’s CEO/Dictator, Donald Trump, has embarrassed America on the world stage; this time at the recent G7 summit conference in Quebec, Canada. In one weekend, Trump managed to insult our trusted allies and at the same time strengthen support for his old pal Vlad Putin in Russia. He vilified Canada…that’s right, Canada… and their leader Justin Trudeau for talking back to the U.S. because of Trump’s recent decision to increase tariffs. Seriously, folks; Trump was all kind of crazy with his statements. German chancellor, Angela Merkel, was equally distressed about the experience. The summit made it clear to the world that Trump exists to make Russia great again.

That’s right, folks. Trump was all love when it came to talking up Russia and trying to get them readmitted to the summit meetings, thus making them the G8 again. But the reason Russia was dismissed from the group in the first place was because they invaded the Ukraine and annexed Crimea. But of course, Trump didn’t even mention this is his commentary. Why? Russia must really have something on Trump for him to blow off our old allies like France, Germany, Britain, Japan, Italy and Canada – you know, democracies – and embrace authoritarian countries like Russia and now North Korea. We’re thinking future economic conferences will very soon be called the G6 summit with Trump deciding that the United States is going to take its ball and go home because it has to play nice with other countries.

One thing that we like from the conference was that Trudeau massively trolled Trump by giving him a framed picture of a hotel in Canada that was run by Trump’s grandfather. It turns out the hotel was a brothel. Yes, the lust for vamps is in Trump’s genes.

We also love the viral photo from the conference which shows what a petulant man-child Trump really is. If clearly shows that if he doesn’t get his way, then he acts like a complete crybaby. We’ve decided to speculate that the picture was taken while ordering some vittles. 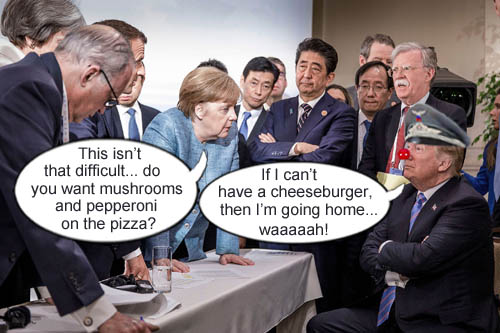 The world is going nuts over Royal Baby Mania! Why? We have no idea. For some reason, people are going gaga because some rich, privileged young couple, who happen to be a duke and duchess in an archaic, mostly for show monarchy that has no relevance in a modern democratic world, have just had their first son. Yay!  Now comes the hard part. What name are they going to give this lil’ guvnuh and future King of Britannia. Well, we’ve thought about this a long time…ahem…actually we just slapped it together at the last second…and we’ve come up with a jolly good list of names for the lil’ bloke. We can hear it now…(trumpet clarion) Ladies and Gentlemen, presenting to you…