2023 marks the 20th anniversary of the BilgeBucket Gazette. Our first issue was on May 19, 2003 and we’ve been shoveling it to the public, just like the corporate media, ever since. We changed our format to a WordPress blog in 2011 so all of our earlier material was archived. We’ve been reposting many of those archived articles, headlines, photo-toons, BilgeBucket Lists and other content over the past twelve years. In honor of our 20th, and because we’re sick of the current state of affairs in the world, we’ll be reposting more items from 2003 through 2009 throughout this year.

Our first post in our retrospective features our first two photo-toons from 2003. If you remember, we had just invaded and taken over Iraq. Saddam Hussein had eluded American forces and was on the run. On the legal front, the Patriot Act had been passed after 9/11 and was threatening all sorts of freedoms in the name of national security. The first toon from our June 19, 2003 issue features former Attorney General from the Bush era, authoritarian bible-thumper and Patriot Act cheerleader John Ashcroft showing off a proud purchase he made on that new website called E-bay. The second from our July 3, 2003 issue features former President and super sleuth George W. Bush boldly stating that he’ll leave no stone unturned in pursuit of Saddam Hussein, at least as long as Iraq’s leader isn’t in the same room. As you can see, our first photo-toons were simple photoshop jobbies with no word bubbles and basic, mildly humorous jabs. We’ve come a long ways since then.

With all the latest news about surveillance, we thought we’d dust off a little article from our June 19, 2003 issue, almost ten years ago. Remember those halcyon days when super christian John Ashcroft was Attorney General, the Patriot Act had just been enacted and Ari Fleischer, doing his impersonation of a Stasi agent, warned us we had to watch what we said. Yes, Big Brother had just started to trample on our civil liberties and it hasn’t gotten any better. Guantanamo Bay is still open, too. Feeling safer yet? We didn’t think so. Thanks Dubya!

In his latest attempt to halt terrorism in its tracks, Attorney General John Ashcroft has announced a plan to wiretap prayers to determine possible plots against the United States.

“Our scientists have made a breakthrough in prayer technology that will enable us to intercept evil prayers from evil doers and bring them to justice,” said Ashcroft. “We’ve built a device that will allow us to monitor all prayers from all American people no matter what religion they may be. We can determine to which God they are praying and for what they are praying.”

Ashcroft then gave an example. “Let’s say Mohammed Muslim starts praying to Allah and asks him to destroy the United States. Our agents can intercept the evil prayer, trace it back to its sender and have him locked up in Guantanamo Bay before you can say Jesus Christ.”

Ashcroft then added, “But don’t say Jesus Christ. It’s a sin to take the Lord’s name in vain.”

When asked if this was an invasion of personal privacy and freedom of religion, Ashcroft retorted angrily, “Look! George Bush and I are tight with God. We are doing his work! He wants us to win and the only way to win is by monitoring the minds of every single American and make sure they have no evil thoughts against the Bush Administration.”

When asked what he thought about the wiretapping of prayers, Jesus Christ said from his palatial mansion in heaven, “Hey it’s what I’d do. I’m tight with these guys okay. They know my mind. Excuse me now but I’ve got to watch the Reds-Dodgers game. Fred McGriff didn’t pray yesterday so I think he’ll be striking out a lot today. Who says I don’t care about sports.”

It’s Halloween again and speaking of ghouls and goblins we got to reminiscing about those glorious days of the Bush Administration. Here’s a photo-toon from our November 6, 2003 issue, when Dubya threw the mother of all Halloweenie parties at the White House. Those conservatives sure know how to party! 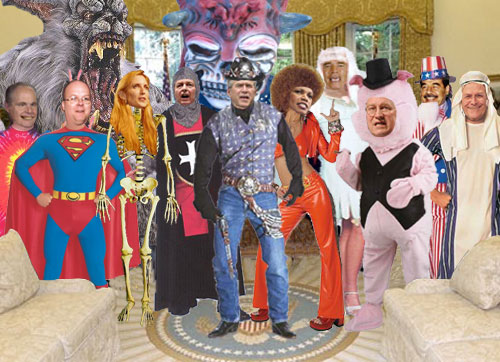 The Deficit and the Iraq Occupation make a surprise appearance at the Bush Administration's wacky Halloween party.