What A Bunch Of Suckers

With the recent failure of the Republican Healthcare Plan or the American Health Care Act or Ryancare or Trumpcare, you would think that more of the people who voted for Trump would be realizing that he isn’t what he claimed to be. Although Trump’s approval numbers are abysmal, he’s still popular with most of his base. We’ve noted before that he is the master bait and switcher and that a few Trumpeters have come to the conclusion, albeit way too slowly, that the Affordable Care Act (Obamacare), while certainly not perfect or ideal, is actually a good thing and a good first step to what this country really needs: single payer health care.

So it brings us back to our continual bewilderment which we’ve talked about ad infinitum before: how the hell such an obvious con artist like Trump won the election. Why would anyone who made under 100k a year vote for a man who obviously supports the rich and wealthy and has proven it so far in his administration? He has loaded his cabinet with billionaire plutocrats and people whose only interest is in the well being of corporations, their stockholders and their own investment portfolios. His failed healthcare plan gave tax relief to the richest Americans. He’s admitted that his proposed tax plan would favor the wealthy. He’s also just signed a bill which repeals protection for workers from wage theft from unscrupulous employers, proving that in any given conflict, he will side with the rich executives and not the middle class and poor workers. But this isn’t just characteristic of Trump, the whole Republican party has been relentlessly cruel to the poor.  But yet the workers of this country continue deluding themselves that they’re temporarily embarrassed millionaires and worship the selfish, egotistical, greedy, ultra- materialistic, ultra-competitive assholes who populate the GOP.

So what do you call people who make less than 100k a year and yet vote for Republicans: Suckers! 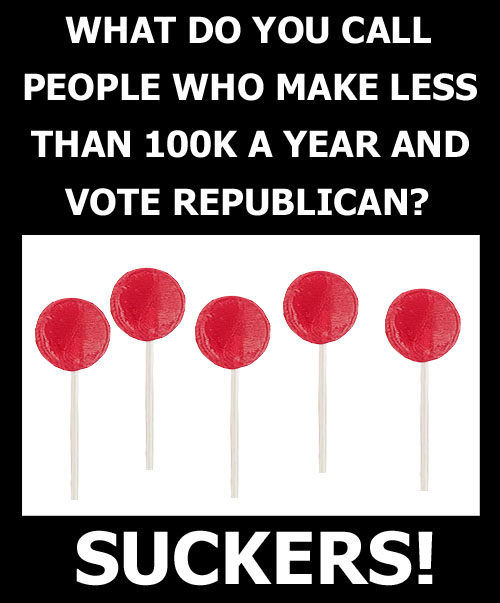 Many Trump and Republican supporters must face the ugly truth: they’re a bunch of suckers.